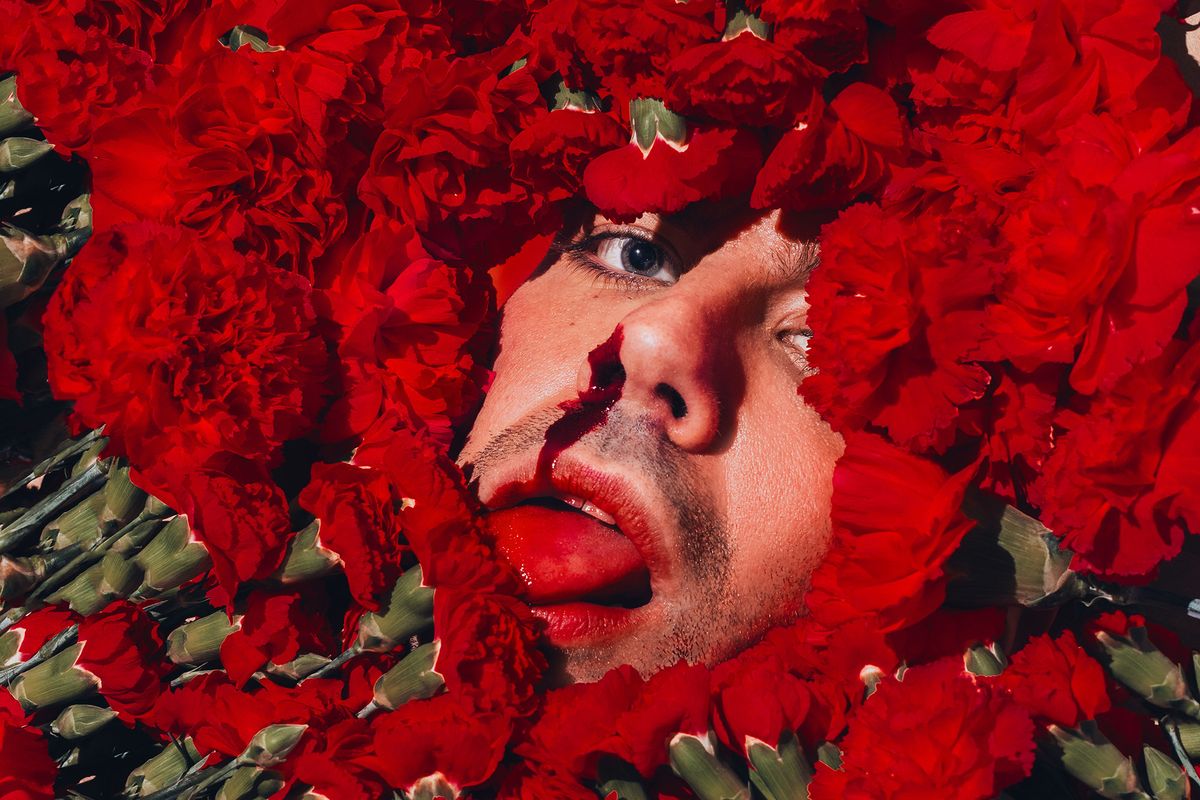 Jesse Saint John's debut EP sounds like a huge release: an exhale, a scream, a climax, a breakdown, a declaration. Having co-written tons of pop songs for artists ranging from Britney Spears to Camila Cabello, don't stop dancing. life gets sad. is Saint John's first solo statement — and yet the LA-based artist still rallied all his friends (Brooke Candy, lil aaron, Ojivolta, Alex Chapman) to make the project happen.

Where many of the albums Saint John is used to working on are carefully groomed, processed and released through a major label, DSDLGS has the edge of a-moment-in-time ideas, with frayed, multi-dimensional production and lyrics that spotlight his rawest emotions. "[The project] is a collection of the weirdest, pop-est, most honest, most bizarre, most communicable work I could smash together," Saint John says.

On EP opener "Wall," Saint John drops an explosive reminder that he's helped pen some of Candy's most addictive, aggressive raps ("Das Me" and "My Sex," among others). It's fierce and unforgiving: "Smash my head against the wall," he repeats, his vocals glitched out and menacing. "Alex's Song," co-written with Chapman, reads like an iPhone note: honest, unassuming and refreshingly intimate (There's a moment spliced in at 1:45, where Saint John talks candidly about production ideas before the result of their studio brainstorm kicks in).

Three previously released singles round out DSDLGS' five tracks. There's the update of "What Do U Like," featuring Kim Petras collaborator lil aaron and producer Ojivolta. Much like "Wall," Saint John's second take at the electro-pop song is grizzly and scattered, bringing in guitars and bomb-like bass. "Crying" is deceiving: it opens as a sunny '80s bop, before the admission, "I feel so much better when I'm crying," drives the song into a screaming pit of synths. "Wiser" is Saint John's conclusion, ending with a question, not an answer: "What if I'm not getting any wiser, I'm only getting older?"

Erika Jayne: I'm so excited for you to release new music, babe! What can we expect from this project? Is there any sort of message behind it?

Jesse Saint John: First off, you're an icon. Secondly, yeah the project is generally based around the ways we distract ourselves and cope with daily depression, but it's just basically a collection of the weirdest, pop-est, most honest, most bizarre, most communicable work I could smash together.

Erika Jayne: You're one hell of a pop music writer — not just for me, but for Britney, Charli, Camila, Brooke. How does it feel to be doing your own music now and to stand center stage?

Jesse Saint John: Ahhhhh it's crazy, it honestly feels so much like an extension of the same expression. I don't separate it in my mind too much cause I also do creative direction, styling, and videos for other artists so it's just like that, but ME! I do love performing though, and being up on the stage.

Erika Jayne: How would you describe yourself as an artist?

Jesse Saint John: I think I'm just that weird pop-loving alternative artsy girl — same thing as I am in the pop songwriting world, just singled out and sharing my voice and my weirdo mash-up ideas completely unfiltered.

Jesse Saint John: Musically I'm inspired by Kanye, Blood Orange, SSION, Britney, Fiona Apple, The Killers. It seems so scattered, but sonically I find a through-line in all of their music — experimental, honest pop. I guess that's my genre.

"[The project] is a collection of the weirdest, pop-est, most honest, most bizarre, most communicable work I could smash together."

Erika Jayne: How about fashion-wise?

Jesse Saint John: I adore deconstruction, punk and avant-garde. Margiela, Westwood, Commes, and Galliano. I was dying that the Met [Gala] theme this year was Camp cause I mean I grew up on Death Becomes Her and I know you would've killed the assignment if you went. Kacey Musgraves honestly looked like your day-to-day grocery-shopping look.

Erika Jayne: When and where are you performing soon, so we can come see you? Will you be touring?

Jesse Saint John: LA people! I'm doing the entire EP on May 14 with special guests at Madame Siam's in Hollywood. I'll be popping up all over all summer, so follow me on Instagram to stay updated on where I'll be appearing.

Erika Jayne: Congratulations on everything, baby! I'm so happy for you and can't wait to see what comes next. And write me another song.

Stream don't stop dancing. life gets sad. by Jesse Saint John, below, and follow him on Instagram (@jessesaintjohn).