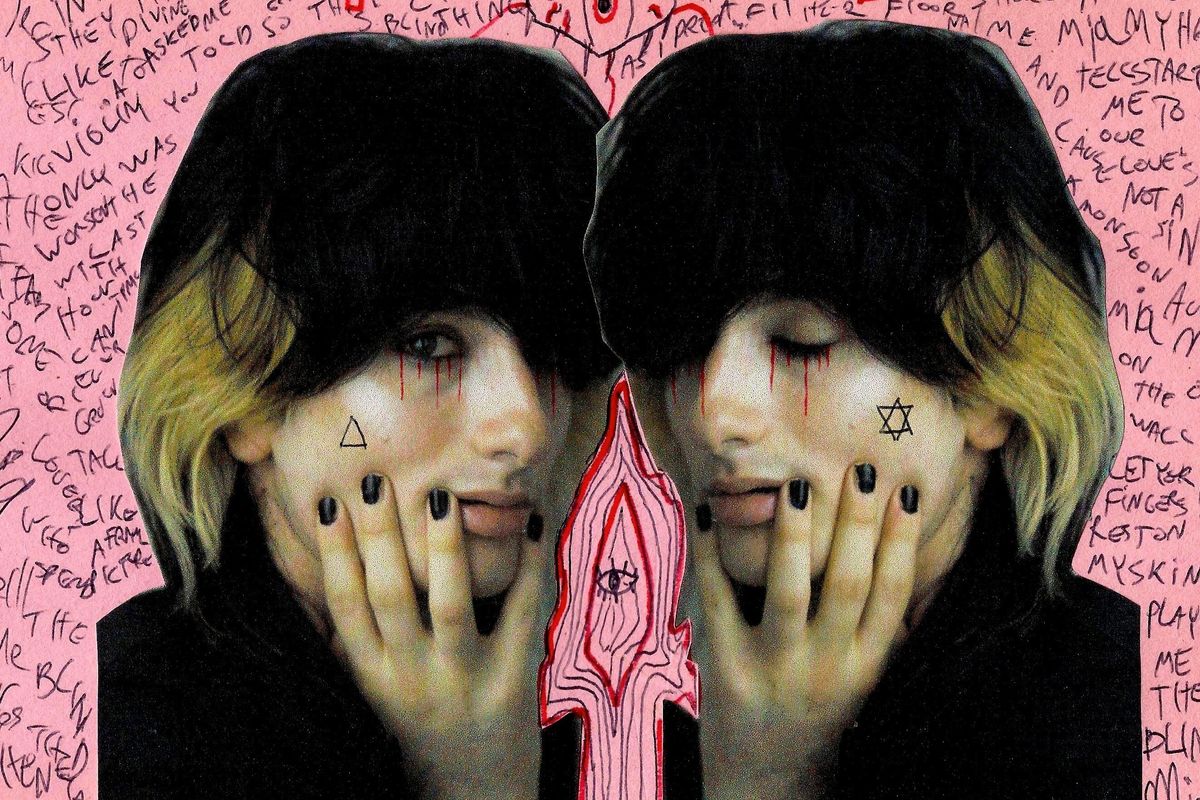 Dylan Mars Greenberg's 'MIA' Is the '80s Through a Digital Lens

Somewhere between the faded pastels and grainy VHS footage of the '80s and the neo-Dada internet iconoclasm of today lies Dylan Mars Greenberg's "MIA."

Drawing on the sparkling plasticine glam rock of Culture Club and A Flock of Seagulls and running it through a campy vapowave lens, "MIA" takes a contemporary look at 80s aesthetics. Complete with karaoke captions, mullets with copious amounts of volume, and dancing cyber skeletons, Greenberg fully immerses herself in the role of a pop idol.

Greenberg's fascination with the '80s is indicative of a larger queer cultural nostalgia. A generation that grew up on chatrooms and MySpace pages found queer representation in the John Hughes' films and Donna Summer cassettes their parents had lying around the house. More than a decade after Stonewall, the LGBTQ community slowly worked its way towards mainstream acceptance through pop culture infiltration, visible figures like Elton John, George Michael, and the rise of disco sanitized gay culture enough that it was palatable to a heteronormative society.

"MIA's" seemingly banal juxtapositions of quasi-poetic images in its refrain of "How can I ever grow tall?/Like a picture frame on the wall/that is never noticed at all" are indicative of a newer generation of queers looking at the 80s through a digital lens. An onslaught of media all jumbled together, remixed, and remade is what gave us vaporwave in the first place. Greenberg takes it a step further in her video using this fractured non-linear method as a way to explore queer isolation and love.

We caught up with Dylan Mars Greenberg to dive deeper into inspiration behind "MIA":

"MIA" is cleary very aesthetically inspired by the '80s but it also has very vaporwave slant to it, I was wondering if you could elaborate on that choice?

I think vaporwave is sort of my generation holding a funhouse mirror to '80s culture, and curating the aesthetic elements we gathered from it into a neat little grid, so to speak. The initial relationship with my producer began when he noticed a vaporwave video and song I had produced myself; however unlike the usual sonic route which was to slow down and remix an already existing song, I had produced my own original piece and then slowed my own voice down, creating something that sounded old and weathered while actually being quite recent. I think in the creation of both the song and video my goal was to play with a very recognizable and old environment in a contemporary setting where more is possible, while recognizing that what we consider dated or retro is the very foundation holding our modern visual and musical
structures.

Why the fascination with the '80s? Why did it make sense to go that route for this video?

I don't know precisely when I became so fascinated with the '80s, considering I wasn't alive to experience that decade, but I think it's as simple as my baby brain responding to bright sounds and colors! Over time I've gained a growing interest in Italo Disco, which was sort of non-UK Europe's less serious answer to new wave. The sound and look of that genre and era in particular always stuck out to me in the broader vastness that was '80s culture and I wanted to use the same artificiality that may have been conveyed in the past with various degrees of intention to send the message: "Hey, I sort of feel trapped in this virtual world where things are exciting but aren't real!"

What was the inspiration behind the song itself?

When I wrote the song, it was inspired by the steep and slippery climb myself and loved ones have faced as queer people, often relating to each other our struggles to connect both romantically and platonically with other human beings. There is often this fine line we find ourselves walking between the desperate craving for attention and the longing for total tranquility - Mia represents both an individual being fighting to connect and cope with their trauma, and the frightening indecision that can destroy interpersonal relationships, "M.I.A" being an initialization of the phrase "Missing In Action".

"MIA" reminds me a lot of teenage coming-of-age films from that era, (like Breakfast Club, Sixteen Candles, etc.) What is the significance of queering narratives like that?

Growing up with these movies, I always had a desire to expand past the boy meets girl story into something more unique - now having directed six feature films myself, I try to approach all of my art with a very cinematic angle. It goes without saying that the popular culture of the past dictates the status quo of the present - by recreating the past in a way that prioritizes ideas previously having gone unspoken, we're letting their ghosts free.

What is on the horizon for Dylan Mars Greenberg?

This song and video tie into my larger project, which is my upcoming seventh feature film Spirit Riser. Produced by True Groove productions, it has a massive cast including Amanda Flowers, Cherie Currie (of the Runaways), NOBUNNY, Jurgen Azazel Munster, Jessie Yungbei, Dorian Electra, Weston Allen, Kansas and Parker Bowling, Patti Harrison, Yolpie Kaiser, Kal Madsen, my own sister Summer Greenberg, and is narrated by Michael Madsen from Kill Bill and Resevoir Dogs! I am also currently starring in legendary cult director Lloyd Kaufman's new film Shakespeare's Sh*tstorm which is a transgressive, obscene and anti capitalist adaptation of Shakespeare's The Tempest that I believe will turn a few heads.

Watch the PAPER premiere of the official video for "MIA" by Dylan Mars Greenberg below: