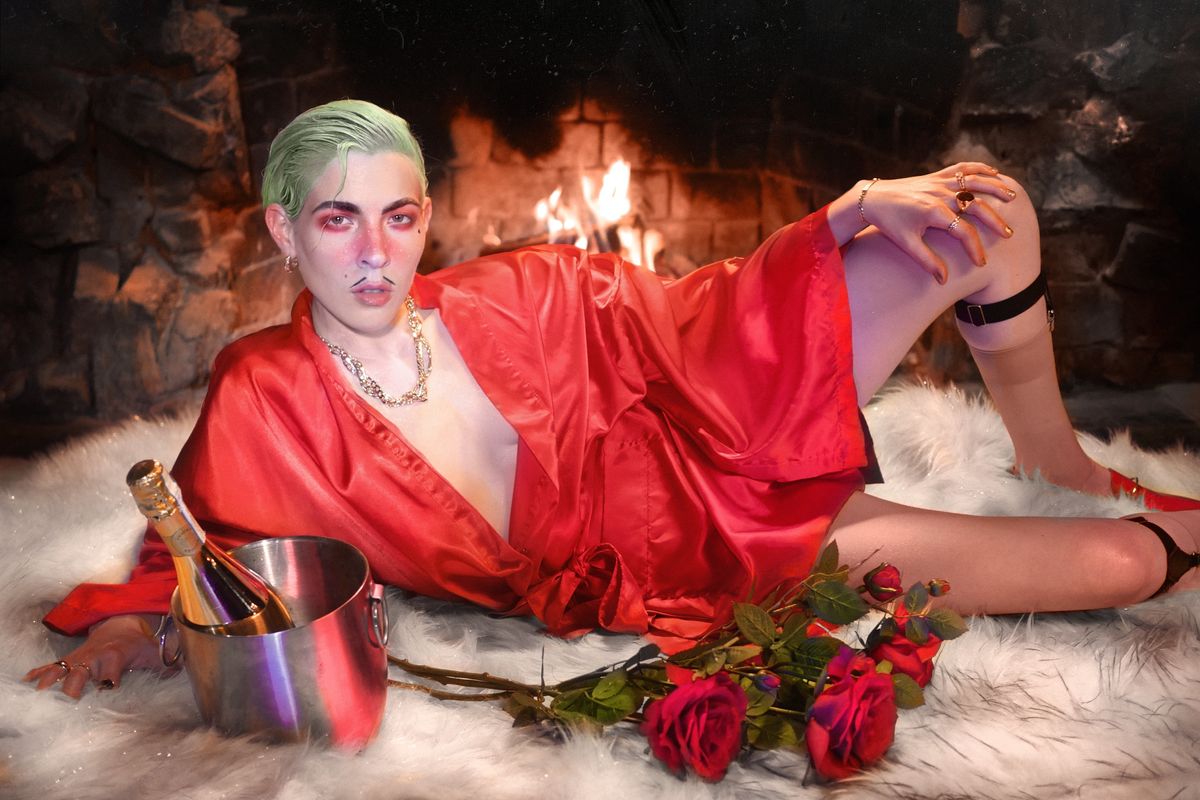 Dorian Electra is in a league of their own at this point. Over the past year, they've released smashing, upside-down stories of self actualization in the form of music video after music video. Their lyrics and instrumentals are chaotic-yet-controlled, fluctuating between synth heaven and vocal acrobatics. They've crashed through the upper limit of what one might expect to contain pop music, and on their newest single, "Flamboyant," they're going a step further.

"Flamboyant" is a flickering add to Electra's already fiery discography. Where their other songs, like "Man to Man" and "Career Boy" are more focused on telling a visually and sonically linear story, "Flamboyant" is a moment for Electra to just shine and show off. Their voice in the chorus stands alone, modified, of course, by a generous amount of robotic distortion. It's like listening to a champagne glass being poured over for over three minutes straight; every note is flashy and exuberant, dipping and swerving through a relatively steady drum pattern.

If the song wasn't enough of a sensory overload, the video for "Flamboyant" might send you into a sugary stupor. You're welcomed into Electra's study, an ornately decorated, ever-changing space filled with candelabras, antique picture frames, burning roses, and sequins. Lots of sequins.

In honor of their new release, PAPER asked Dorian Electra to put together their top five favorite "Flamboyant" icons, because who doesn't love a "flaming, flammable guy?"

The late American pianist and entertainer, Liberace, in all his glitter and glory, was the primary inspiration for my music video. He never turned down, and every year, his dress and stage performances — including fur coats with 20-foot trains and rhinestone-encrusted everything — would get increasingly extravagant and inventive. I modeled the back up dancer costumes in my video after the custom bedazzled chauffeur outfits that Liberace's secret love and assistant, Scott Thorson, would wear as he drove Liberace onto the stage in one of his multiple Rolls Royce stretch limousines each night at the beginning of the show. Despite all of these seemingly obvious signifiers, women loved Liberace, which is part of what made it easier for him to hide his sexuality from the public, along with staged engagements to female celebrities throughout his career. Liberace, inspired by the ornate aesthetic of the classic baroque and romantic composers, paved the way for some of the most iconic rock stars and performers of the 20th century like Elton John, David Bowie, Freddie Mercury, Mick Jagger, Roger Daltry, the list goes on.

My parents took my name Dorian from The Picture of Dorian Gray, and coincidentally I think one of my earliest encounters with the word "flamboyant" was in reading about Oscar Wilde! So many different biographies and descriptors of him as dressing "flamboyantly" in purple velvet and green satin, or having a "flamboyant" lifestyle. Whereas a straight man's over-the-top outfits might be described as "eccentric" or "ostentatious," it always seemed that "flamboyant" was used as a kind of euphemism for something more. If not simply "homosexuality," then some kind of different outlook on life, something that said "F.U." to what others think, and daring to be as loud and proud as possible with a certain air of self-awareness and embracing the ridiculous of it all.

Alice Cooper is absolutely one of the most over-the-top entertainers in modern music history. Massively inspirational to me and my stage show. He was one of the original "shock-rockers" who crossed over into the mainstream and laid the groundwork for later shock-pop artists like Marilyn Manson. His elaborate stage shows, starting in the '70s and continuing today, involved getting be-headed by a large guillotine, shocked to death in an electric chair, otherwise whipped, beaten and tortured and lots and lots and fake blood and whirlwind costume changes. His marketing tactics were basically to be as crazy as possible, make parents hate him, all while making great rock music with the potential for popular appeal. Flamboyant king for sure.

Prince absolutely forever changed the game by pushing the flamboyant boundaries of dress, genre, subject matter, sexuality and attitude. A huge part of "flamboyance" as I see it, is embracing both extremes of masculinity and femininity and everything in between to make the loudest, most unapologetic statement possible. Prince embodied this spirit in everything that he did.

Okay, I know this is a fictional character and not a historical figure, but Austin Powers is honestly one of the most personally inspirational flamboyant icons ever! From his velvet ensembles and ruffled shirts to paisley print mod cut suits and chelsea boots — he truly is a fashion god with a flamboyant personality to match. My dad took me to see the first Austin Powers in theaters when I was like six years old and it absolutely had a lasting impact on me. As I kid, I didn't realize that part of the whole joke of the character was that he was supposed to be grotesque and humorously unappealing, with his bad teeth and over-the-top, clown-like sexuality, I just thought he was supposed to be a regular "hot" protagonist! So I think he sort of became my reference point for my personal masculine idea, and I think that probably shows a lot.