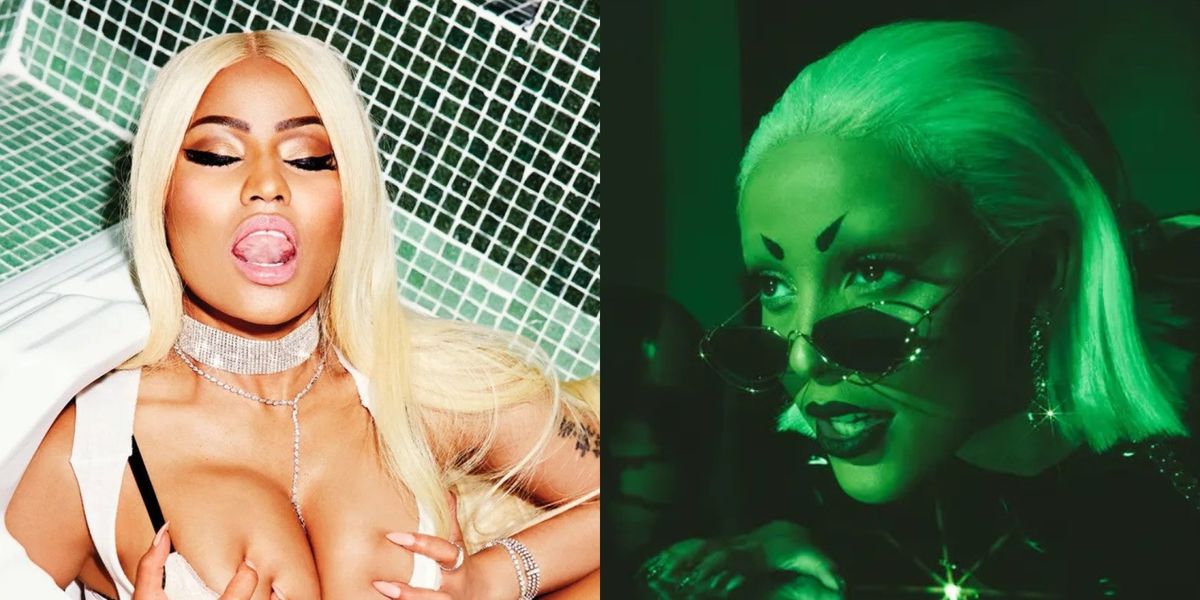 Stream Doja and Nicki's 'Say So' Remix, I Know You're Not Busy

Nicki Minaj's feature on Doja Cat's notoriously catchy TikTok anthem, "Say So," is nothing short of the usual perfection we've come to expect from the queen of rap, packed full of rhymes and disses to stir up the internet even in a quarantine content drought. The two knockout stars are at the helm of a hit — so Barbz, assemble. We're trying for a number one here, and we just might get it.

As if they were consciously fulfilling some kind of pink wig pop prophecy meant for stan Twitter and stan Twitter only, Doja and Nicki teamed up to deliver a New Music Friday treat of epic proportions today with the remix drop, despite a bumpy rollout. Barbz made sure to spread the word late last night when Nicki took to Instagram to explain that a technical error would cause an older version of the remix to come out at midnight, but that her team was working quickly to correct the error. Sure enough, she was right — the newly corrected, bass-booming and beat-shifting version that fans are now bumping up the charts is officially available for listening across platforms.

"Word to my ass-shots, I'm so cheeky/ Got 'em tryna palm my ass like young Keke," are two of the many lines in Nicki's remix verse that have fans around the world gasping and rewinding the track just to revel in the sheer wit of her bars. Despite having some truly fun moments and being chock full of pop culture references, like the homage to Keke Palmer, some Twitter users are still attempting to make Nicki the bad guy — Barbz, you know how this goes.

"The line ain't about Wendy tho," Nicki posted to her Instagram stories today, clearing up a line from the outro of the "Say So" remix that some thought was a dig at talk show host Wendy Williams. "Why you talkin' 'bout who body fake?/ With all them fillers in your face, you just full of hate," she spits right before the track wraps up. Without any clear attachment to the "Hot Topics" segment maven, any gossip on Twitter as to the aim of her verse is just speculation at this point.

Despite the minuscule amount of backlash, it's mostly love on social media for Doja and Nicki alike; Doja's album has been producing viral hit after viral hit over the past few months since its release. Whether you're dancing to "Juicy," "Like That," or "Say So," you're still making the most of your quarantine on TikTok — and with the new remix, prepare to add some fresh moves to your roster of woah's and head-bobs.