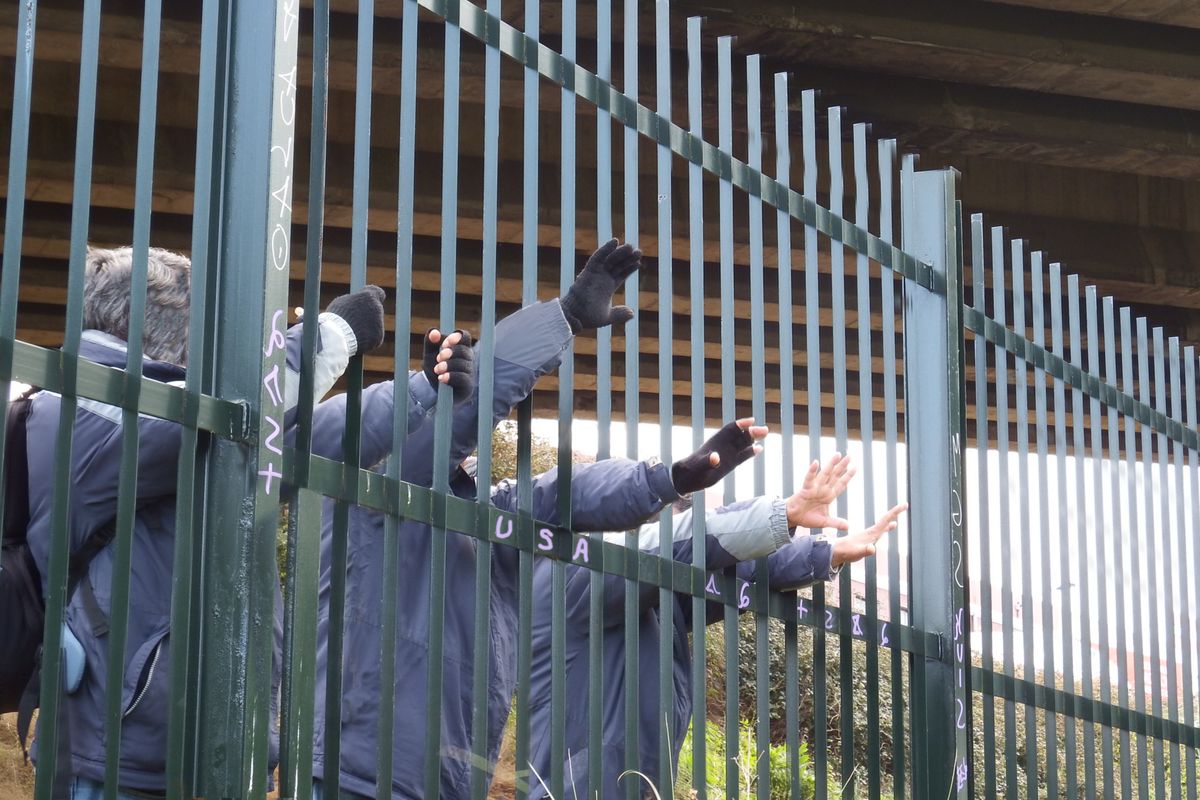 Talking Anonymously With a Young Immigrant At Risk of Deportation

When the Trump administration announced on Monday that it would be ending 17 years of Temporary Protection Status for approximately 260,050 El Salvadoran immigrants, the community had feared it might happen, but was shocked nonetheless. Speaking on the condition of anonymity, Jose, a professional in his mid-twenties, said that his mother had been crying all morning.

"People have reached out, asking me what they can do," Jose said over the phone. "I have no idea, except for calling representatives in Congress."

Jose has spent most of his life in the United States. His parents fled the El Salvadoran Civil War that ravaged the small Central American country from 1972 to roughly 1992, bringing him to the U.S. in the mid-nineties when he was just eight-years-old. Since then, Jose and his parents have never returned to El Salvador, having made lives for themselves in America like so many immigrants before them. TPS granted them the ability to live and work legally for nearly two decades, but now, they've been given eighteen months to pack up their lives and never return.

TPS was enacted by Congress in 1990 to provide humanitarian relief to immigrants fleeing countries that are unsafe due to war or natural disaster. El Salvador fits into both categories: following its brutal and bloody 12-year civil war that ended roughly in 1992, the country was struck by a pair of devastating earthquakes in 2001 that left its infrastructure shattered. TPS has been renewed 10 times for El Salvador, and nine other countries — Haiti, Honduras, Nepal, Nicaragua, Somalia, Sudan, South Sudan, Syria, and Yemen — also had the protection, until now.

Since taking office last year, Trump has already revoked TPS for 2,500 Nicaraguans and 45,000 Haitians granted protection following a disastrous 2010 earthquake. 57,000 Hondurans are currently awaiting their fate. With the more than 250,000 El Salvadorans now affected, the administration has set up more than 320,000 immigrants to lose their ability to work and attend school legally over the course of the next two years, many of whom have deep ties to the U.S.

Vox reports that approximately 192,700 U.S.-born children have at least one parent who will lose their legal status following Monday's announcement, for instance. These decisions don't just affect individuals, but also the communities and families they're enmeshed in.

Many immigrants in Jose's peer group — young, educated millennials who've spent most of their lives in the U.S. — fall under the tenuous protection of the Dream Act. Though Dreamers are also being threatened with imminent deportation, they have received more media attention than their TPS counterparts. Though Jose could have applied to be part of the Dream Act, his immigration lawyers thought TPS was a safer bet.

"Way back when the Dream Act passed, I asked my lawyers if I should do that instead," he said. "And they said to stay with TPS, because they thought this was more stable. But Trump took DACA first, and now he's also taking TPS, so I'm kind of fucked."'

The Trump administration's argument is that the TPS program was never intended to last forever, and that only by ending temporary status will Congress be able to provide a "permanent solution" for the hundreds of thousands of people who've made their lives here and now have little connection to the countries they've come from.

But current pathways to citizenship are mostly unviable for these immigrants, and proposed legislation has a long history of being stalled. The ASPIRE Act, introduced in late November as a possible resolution for individuals here under TPS, has only a 5% chance of being enacted, according to data analysis company Skopos Lab.

Jose also says that the administration doesn't seem to understand the situation in El Salvador, calling the claim that the country is stable "ridiculous." Statistics provided by the U.S. State Department's Bureau of Diplomatic Security back Jose up: El Salvador has one of the highest homicide rates in the world, and according to the Bureau, "crimes of every type routinely occur, and crime is unpredictable, gang-centric, and characterized by violence directed against both known victims and targets of opportunity." In 2016, the US Peace Corps, which often travels to unstable and dangerous regions, suspended its program in El Salvador "due to the ongoing security environment."

"The murder rate in my country is higher than it was during the Civil War," Jose said. "[Trump] fails to look at anything outside of the infrastructure. Of course buildings have been rebuilt; the earthquakes happened in 2001. But the rest of society is worse off. That's why people are still fleeing. There's a huge gap of understanding facts that the administration fails to see."

He also said that few immigrants have any intention of actually leaving the U.S., anyway.

"We are all going to stay," he said. "That's the other thing I think the administration doesn't understand. Okay, you're going to take our papers away. It's not like we're all going to self-deport. We have our lives here, and what we're going to do is just stay here and work illegally, which is terrible for the economy and terrible for everybody."

Heading to another country may not be an option, either. Bracing itself to receive an influx of immigrants as it did following Trump's ending of TPS for Haitians, the Canadian government said it plans to send representatives to El Salvadoran communities in the U.S. to urge them not to travel to Canada without proper papers.

"Canada has a robust and structured immigration system that must be respected," Pablo Rodriguez, an Argentina-born member of Parliament told La Presse newspaper in a French-language interview. "Before leaving your job, pulling your child from school and selling your house to come to Canada, make sure you understand the rules and the laws. Because if you don't fill these criteria, chances are you'll be returned, not to the U.S. but to your native country."

Jose is already deep into the complicated application process for obtaining an EB-1 Visa, which is granted to immigrants with "extraordinary abilities" and often reserved for workers in tech, which he is not. The end of TPS may make even this dream impossible, though, and he points out just how high the barrier to citizenship of any kind is for his cohort.

Related | Behold the Dreamers: 6 DACA Recipients on Trump, the American Dream and What the Future Holds

"The only paths are marriage or a ridiculous visa like the one I'm trying to obtain," he explained. "I don't think the rest of the population really understands."

The ending of TPS is just one more step toward fulfilling the administration's promise to cut immigration, even legal immigration, by nearly 50%. The Raise Act, an immigration plan unveiled by the administration in August, is based on Australia's "merit based" model and "favors applicants who can speak English, financially support themselves and their families, and demonstrate skills that will contribute to our economy," Trump said in a press conference at the time.

Senior White House adviser Stephen Miller took offense when CNN reporter Jim Acosta said the plan "sounds like you're trying to engineer a racial and ethnic flow of people into this country."

"That is one of the most outrageous, insulting, ignorant and foolish things you've ever said," Miller said back in August. "The notion that you think this is a racist bill is so wrong and so insulting."

Jose noted the wide gap in public perception between Dreamers and people with TPS.

"I think that the public had never heard of this [TPS] until recently. People are more aware of the Dream Act. And I think that's because the Dreamers are educated, and they're millennials, and they're younger like myself. In a weird way, because the Dreamers have positioned themselves as these valedictorians and educated individuals, there's a more public affinity towards them over people with TPS."

Jose added that people once protected under TPS may not represent the highly-skilled, financially able immigrant the administration dreams of attracting, but are worthy of safe and fulfilling lives nonetheless. "Most of the people that I know with TPS are our parents, and people who haven't had the privilege to get an education, and who sometimes struggle with English," he said. "I just want people to be aware that these people also deserve a green card and deserve to stay here legally."

"I'm one of the few people that I know that's my age who can fall under both of them," he added. "And I am educated, and I have had the privilege to attend really prestigious universities and that's why I qualified for this visa. But it's absurd that people haven't heard about TPS."

"I am hopeful that Congress won't let Trump do this. I urge people people to stand behind TPS and DACA, to demand both of these be part of a Clean Dream Act, or part of any negotiations. Not one or the other."

To find your representative and tips on how to contact him or her, head here.