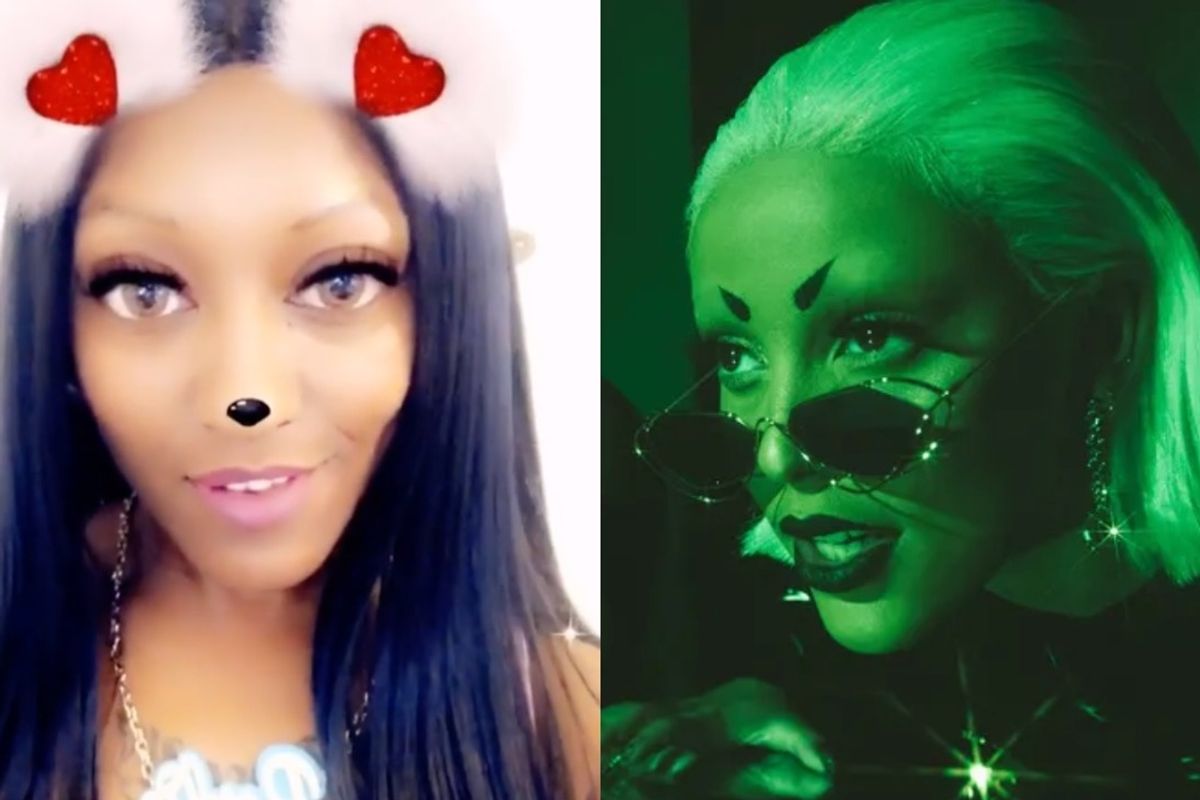 "Oh! What a time to be alive," is the line from Doja Cat's "Cyber Sex," a song that's on every Twitter gay's lips this week. Why is this track suddenly everywhere? It's all thanks to a veteran meme queen, the one and only @TheQueenNenobiaBKTidalWave — aka Nenobia, aka EstellaRobinson, aka The Queen of Brooklyn.

Nenobia has been the internet's favorite Brooklyn meme queen for a while now, although her Instagram account has undergone several transformations. In her bio, she states that she was "FLAGGED AT 54k, 26k and 7700k." At least one of her old accounts still exists on the platform with over 50,000 followers, but the one she is currently operating under is @TheQueenNenobiaBKTidalWave. This lineage is important because Nenobia got her start with virality in 2015 from a HotNewHipHop rant posted to the press outlet's YouTube channel, in which she addresses her love for JAY-Z and Hillary Clinton, as well as her hatred for ISIS. Soon after, she developed her own following as a result of the memes shared from the street interview.

While not much is made public about the social media star's life, she goes on Instagram Live fairly often for her fans and interacts with commenters. Recently she's started a recurring trend on her Lives — dancing to Doja Cat's "Cyber Sex" off of her newest album, Hot Pink.

Dozens of different videos exist of Nenobia performing the song — including her favorite "What a time to be alive!" line — on the internet, and stan Twitter has bravely attempted to catalogue them all in threads like the one above. Whether in private, public, or in the driver's seat, Nenobia simply cannot get the catchy tune out of her head. Now, neither can stan Twitter. It's the kind of post-ironic success that originally led to Doja's rise, with hits like "Moo!" and the TikTok bop "Juicy."

All was love, but for a brief moment, Nenobia vowed to never perform "Cyber Sex" on Instagram Live again because of the fact that Doja had not acknowledged her now-viral videos. It didn't take long, however, for Doja to notice the meme queen. Wednesday evening on her own Instagram Live, Doja Cat quoted one of Nenobia's viral videos and expressed her love for the social media star.

With stans demanding a collab from the two queens immediately, there's no telling what could happen next. The audio from the meme of Nenobia is already even starting to go viral on TikTok. Just please, for the love of God, don't get Nenobia's account flagged again! We need the "Cyber Sex" memes daily.

Estellarobinson on Instagram: “YO I Was so sad 😞 😢 thinking’s about my son #mylsdobson #ripmylsdobson ALL DAY AND TO SEE THIS @dojacat MADE ME SMILE 😃 SO BIG NAH BISH I…”