New York Fashion Week was a little dreary this season. It rained a lot, which makes the city look kind of Joker-y. Numerous designers (even New York stalwart Jeremy Scott) fled the schedule for Paris, and CFDA chairman Tom Ford skipped out, taking his show to Los Angeles for the Oscars star power.A fancy writer and I swapped notes about depression on the dancefloor at a party for an Italian brand, where the venue featured a painting of Lin-Manuel Miranda in the lobby. Misery. It all felt abbreviated. To quote André Leon Talley, it was bleak street. A famine of beauty. At least there was a Ciara performance at the Bulgari party.

But I am an optimist, because fashion is beautiful, and referencing the end of fashion week and also the world is getting tired. The gloominess made joyful moments stand out all the more. It's fashion week! It's fun! There are free cocktails everywhere!

Over the weekend, a few events stood out as bastions of happiness. On Saturday, Susan Alexandra, best known for making adorable beaded bags, presented a musical at the Public Hotel in lieu of a traditional runway show or presentation. Designer Susan Korn likes to spice up the schedule; last season she threw herself a bat mitzvah, complete with bedazzled yarmulkes. 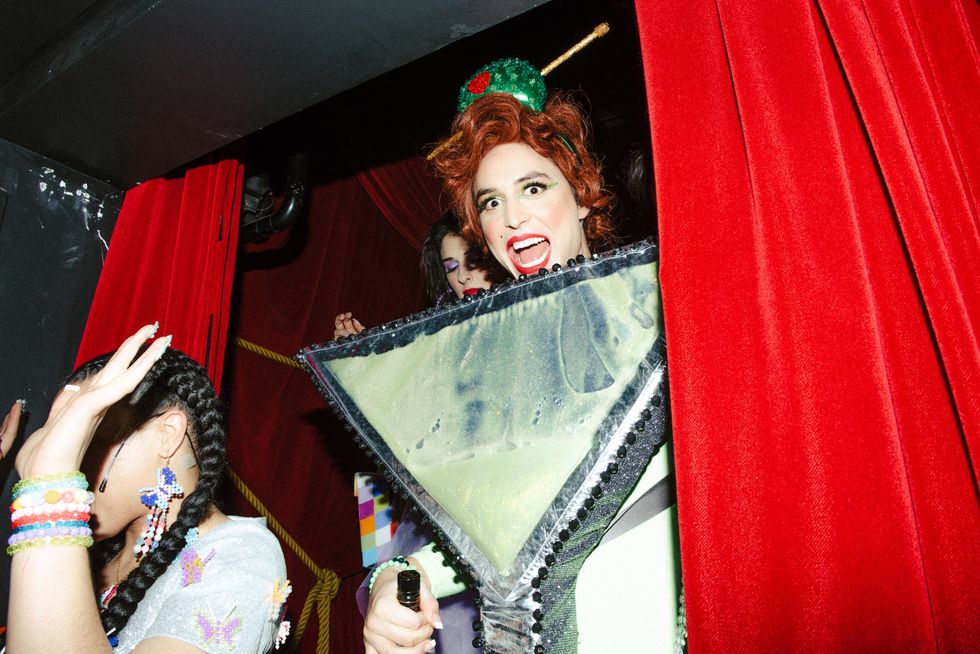 Susan Alexandra: The Musical was an uproarious program that had the audience laughing and cheering. Starring comedians like Lauren Servideo and Benito Skinner (aka BennyDrama), Broadway powerhouse Larry Owens, and actress Aisha Kerensa in the titular role, the musical told the story of Susan's attempts to open a store in SoHo in the wake of everything closing everywhere ("I have to go shop the closing sale at Opening Ceremony," sneered former fashion journalist and Même Chose founder Jessica Joffe, playing Susan's potential Prince Street landlord). Witty lyrics by Mur – you may know him as the Santal dragger – had the audience in stitches. And the whole thing was so uplifting! As the cast sang in the grand finale, "Like Frida Kahlo painting in a body cast/Like Greta Thunberg on a BBC broadcast HOW DARE YOU/Like Barbra Streisand never fails to flabbergast/Nothing can dim the light within us."

Related | Wear These Eckhaus Latta Fall 2020 Looks to the Office

In a quick speech after the show, Korn explained why she wanted to present a musical. "I took my mom to a fashion show once, and she kept talking about how sad the models looked," she said. "So I always want to do something joyful." 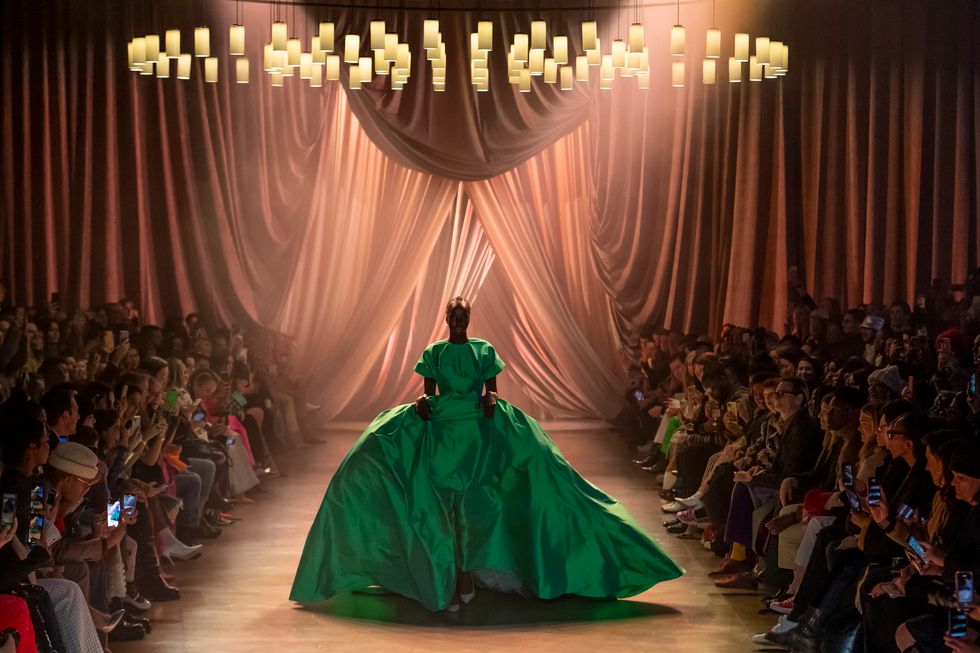 A few hours later, Christopher John Rogers showed at Spring Studios. Following a year of non-stop ascendance, including winning the 2019 CFDA/Vogue Fashion Fund, people were thrilled to be there; the room was packed to the gills. I lost my seat. But it didn't matter! The show was so full of energy, so alive. Rogers, who designs loud, exaggerated eveningwear that suits all kinds of bodies, encourages his models to twirl and do ballroom-inflected poses and really bring the drama. Models, primarily women of color, were young, old, cast across all genders. The applause was deafening.

On Sunday, Collina Strada kicked off on a down note. As guests poured into Lafayette Street nightclub The Dance, actress Sasha Frolova paced up and down a grass-covered runway, reading depressing environmental facts out loud from a sparkly pink notebook for about twenty five minutes. Fashion (particularly the fast kind) is an enormous polluter, and it's not such an exaggeration to say that everyone who attends fashion week is a contributor to the degradation of our planet. As Frolova encouraged us to stop using plastic and paper bags, bring tupperware to restaurants for takeout, and stop washing our clothes and wearing deodorant, a prominent fashion critic rolled her eyes several times. It was important! But also, you know. A bummer. 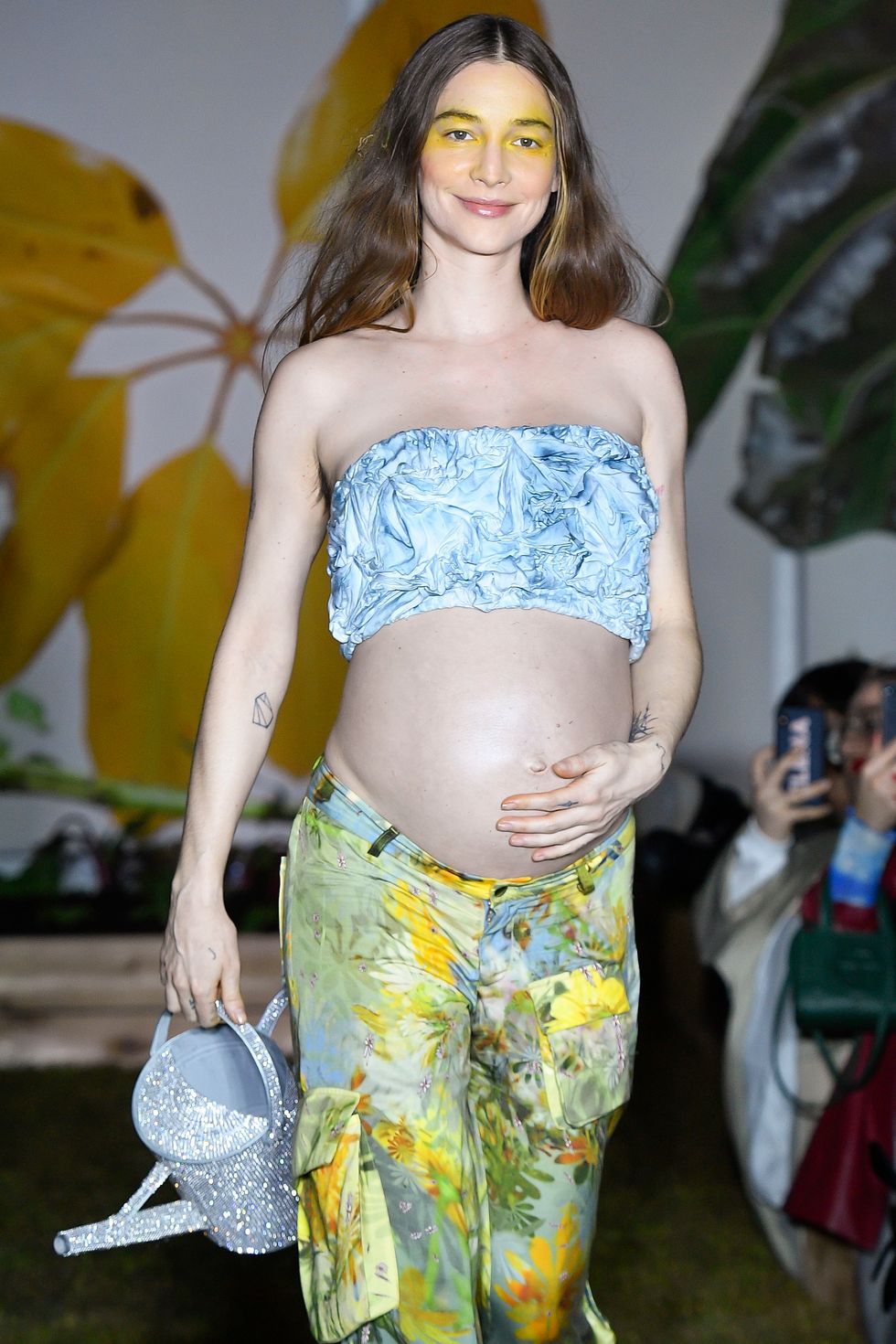 But then the show was a riot. Titled "Garden Ho," models of all sizes and genders (including Hanne Gaby Odiele and Danny Bowien) ran and did nutty dances down the runway; Ali Michael gave another model a piggyback ride. They carried bedazzled hoes slung over their shoulders. And the clothes! The clothes, many made from a "sylk" derived from rose petals, were a delight – patchworked and slinky and bright and modern. The whole thing closed out with Hayley Williams of Paramore performing "Simmer" from her new solo project. The models gleefully spun around behind her. "Wrap yourself in petals," she sang.

Related | At NYFW, Puppets and Puppets Gets Serious... But Not Too Serious

Sustainability is a buzzword in fashion, often signifying nothing. But Collina Strada designer Hillary Taymour is solidly no bullshit. She produces items in small batches and utilizes deadstock fabrics, and still doesn't claim her brand is sustainable. She donated the grass and radish beds from her show set to the Elizabeth Street Garden, right down the street from her studio; her team will be planting everything. "Everything's always about being conscious," she said backstage post-show. "And I just wanted to create something that was really fun, but also not make it wasteful." She said that the idea behind Frolova's monologue was to get the audience to "feel like they were lame," and that she asked Williams to perform simply because "she's, uh, great."

That show made me so happy. But there were a lot of great moments all throughout the week. The Eckhaus Latta show is still the most vital event in New York fashion; Area wove rhinestones in their models' hair; there was so much airy beauty at Sies Marjan; Thom Browne put on a characteristically chic performance (he shows in Paris now, but likes to throw New York a bone). And then on Wednesday, the god Marc Jacobs delivered a glorious show-slash-performance; dancers darted between models, sprinting and contorting themselves. Excellent videos have been going viral on Twitter.

At GQ, writer Rachel Tashjian pointed out that despite the presence of celebrities like Miley Cyrus and supermodels like Bella Hadid, Jacobs delivered "the first post-Instagram show." She wrote that images from the show were messy, harkening back to a pre-social media era. "The images of early Margiela shows, or early Prada, or even early Marc Jacobs, will exasperate you," she wrote. "The full look is rarely captured, and photographers are coming at the runway from whatever angle they can. It reminds you that you really used to have to be in the room, literally, to know about fashion—and that fashion once privileged the people in that room, cared what they thought and how they reacted, before anyone else. It's totally snobby, obviously, but it's a kind of mutual respect, too."

Neither Tashjian or I actually attended this thing. But looking at videos and photos made a lump catch in my throat. In a season marked by countless headlines about the death of NYFW, someone is trying to make something beautiful, memorable, playful, and singular. Some of us still care.

The 9 Biggest Trends From NYFW