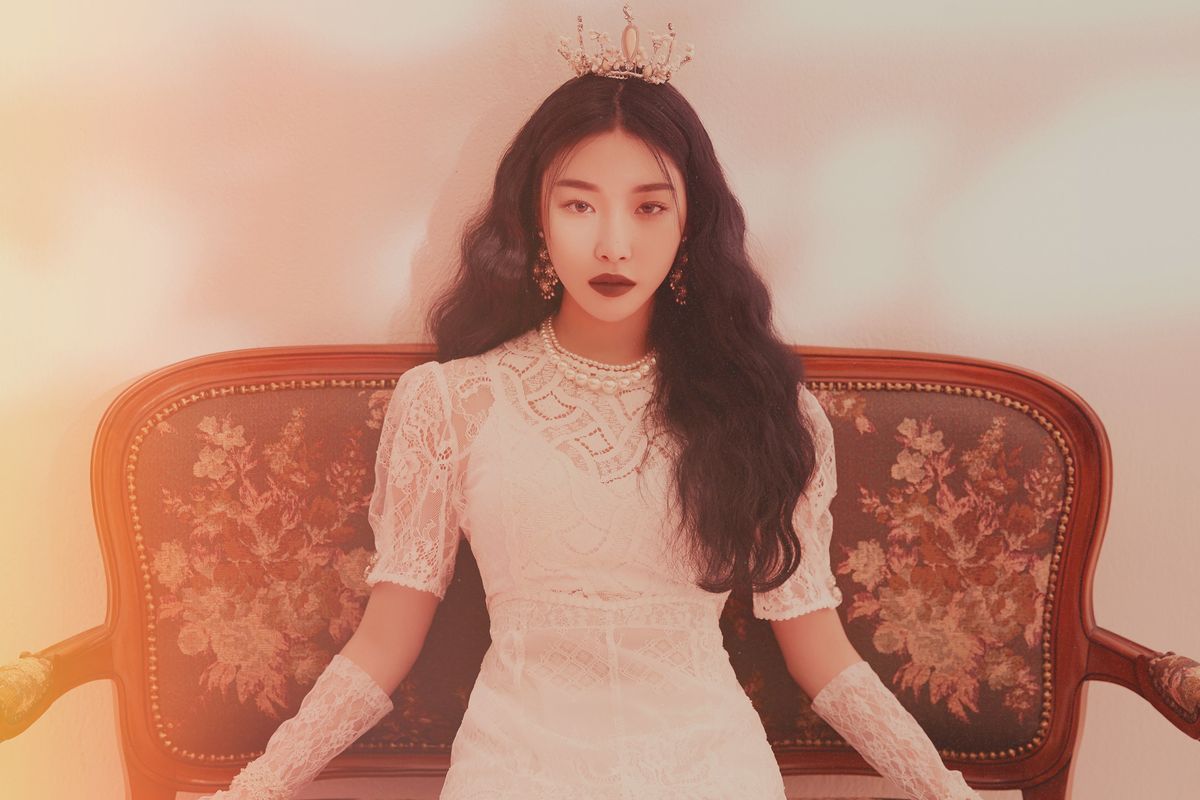 The ball only just dropped in Times Square, but Chungha's already gotta go.

The 22-year-old I.O.I. girl group member-turned-soloist, who took us on a "Roller Coaster" ride at the top of 2018 and helped to make our summer brighter and bluer with her Blooming Blue mini-album over the summer, is at it again for the very start of 2019. And she's kicking things off with a bang – perhaps quite literally.

From the darker, more seductive sound of the song's production to the makeup and styling of the campaign visuals and accompanying choreography-filled music video, "Gotta Go" is the sound of a newer, more "mature" Chungha as she explained in a chat with PAPER just ahead of the single's post-New Year's Day release.

The infectious offering, dominated by a flute melody (early 2019 pop trend alert?), finds the singer reluctantly parting ways with a boy as the clock strikes midnight, just as things are getting hot and heavy. Despite her midnight departure, as she herself stresses, this is no Cinderella story.

You just performed a medley during the 2018 KBS Song Festival. I loved the new version of "Love U," as well as the decision to perform "Do It." How was the overall experience of preparing and performing that stage?

Yeah, so I had fun with that. And then I moved onto "Rollercoaster," and that was good.

Were there any favorite stages from other performers that night?

I loved every stage! I enjoyed it for the whole time. I felt so honored to be there, actually, especially Sunmi and Seulgi and Daehwi's "Heroine" collaboration.

I was going to say – I saw your selfie with Sunmi.

Yeah! We had such a good time.

Their collaboration stage was really cool.

I really loved that. I loved everyone's stage. It was awesome.

The last time we spoke, we discussed how you like working both as a solo artist and in a group. Later on in 2018, you worked on a superstar collaboration — "Wow Thing" — for SM's Station. It was amazing! What was that experience like?

I was very honored to be a part of that project. I learned a lot, and my fans loved it. All of the listeners did. It was an honor to work with musicians that I love. I'm looking forward to doing more, different collaborations in 2019.

Yeah, I was going to ask: are there any more girl group plans in the future lined up? I'm sure you're asked that by everyone.

Not yet...but I'm also looking forward to it! So, if I have a chance, I would love to participate.

Let's get onto the new stuff. What is the meaning of this song and why was it selected as the new sound to kick off the year?

It's very new for me and my fans. It's more mature, and a new side of me is going to be visualized when it's released. I'm very scared and excited at the same time. You know, 2019 is all new. It's an all new year, so I guess it's a great start to start off with "Gotta Go."

What should we expect from this comeback, visually and musically speaking?

No glitter this time. [Laughs] I had a lot of love for putting glitter on my eyes. No glitter this time – I got darker and more matte, I guess. That's the part where I get so excited! It's all new. I've never done such a dark lipstick on me.

And how would you describe the sound?

It has a flute sound in it, in the hook. It's very catchy. It's a more mature vibe, which I've never done or shown before. Everything is really new. It's less tropical – it goes with the season. No summer vibes this time.

Can you tell us about the preparation leading up to this comeback?

Every song and promotion is always challenging. But then, it's unique. In the video, I have a lot of parts that I dance by myself without my dancers. I was really nervous about that part.

You shouldn't be – you're an amazing dancer!

How was the recording process?

It was hard. It was really high this time. I think my voice has matured, as the vibe is more mature. I learned a lot. But now I'm ready to go on stage and do it. You'll see more new, mature parts of Chungha on stage.

Could you talk about the meaning of the song?

Yes, and the year is just beginning! Do you have any resolutions? What is one new thing you'd like to accomplish you've never done before?

I'm starting off immediately with "Gotta Go." I wish to have more one-to-one fan time. I'm preparing for a fan meeting this time, and maybe I can do a full album for the next time.

I would love to do a concert. I haven't done it yet, and that's kind of on my wish list. I don't know if it'll be 2019 officially, but I'm always getting ready for my concert. Maybe if me and my staff are ready, we can kick it off in 2019.

That would be really exciting.

I'm gonna record this – you should come! [Laughs]

Finally, what would the perfect 2019 look like for Chungha?

It's pretty much the same: more music, more fan time and, if there's a chance, a concert. That would be perfect. Even if I don't have one, it'll still be fun because "Gotta Go" is already really, really new and it's a good start for 2019. I'm very excited for 2019!