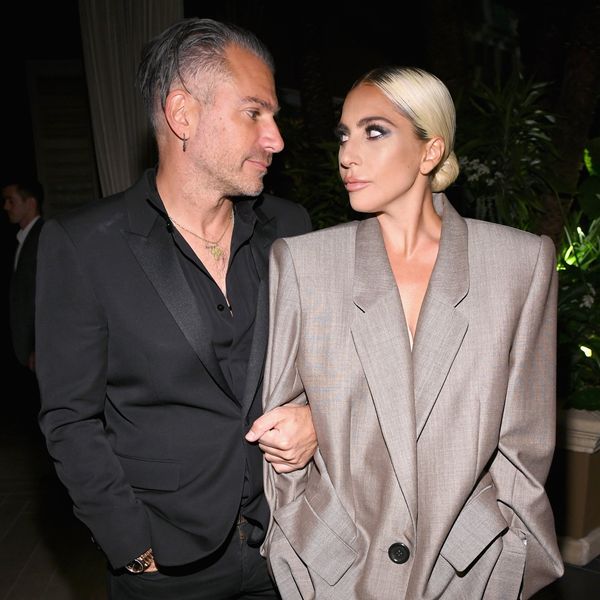 When speaking at the Elle Women in Hollywood event last night, Lady Gaga, a born star, confirmed the long-rumored news that she is engaged to Hollywood power agent Christian Carino. During her speech she thanked, "my fiancé Christian," substantiating stories that have been circulating since last November. Mazel, Gaga!

Gaga has intentionally kept things quiet regarding her relationship, and so it was a surprise when she confirmed the engagement news herself. She and Carino have been linked since early 2017, but she hasn't talked about him much, even though his Instagram serves as a dedicated fanpage to the glory that is Gaga. So, who is this dude?

Christian Carino is a 49-year-old talent agent at CAA, a pioneering company that represents vast swaths of Hollywood talent. His clients include Justin Bieber, Jennifer Lopez, Christina Aguilera, and Miley Cyrus. He has been married before, and has two young children. He may or may not bear a passing resemblance to Gaga's father, Joe Germanotta.

Gaga, who was previously engaged to actor Taylor Kinney, was initially spotted with Carino at a Kings of Leon concert and on the field leading up to her epic 2017 Super Bowl performance. In September of that year, she confirmed that she was in love; Page Six reported that while performing at Citi Field in Queens, she told the crowd that when she went backstage, "Christian was by the stairs making sure I was OK. The best part about being in love with someone is having them there to catch you if you fall."

In October, Gaga shared a sweet picture on her Instagram story of her and Carino at the beach, making the relationship social media official. And in the past year, he's been at her side for numerous A Star Is Born-related events. Considering that the movie is slated to sweep awards season, we imagine we'll be seeing a lot more of him. Look what Lady Gaga found!