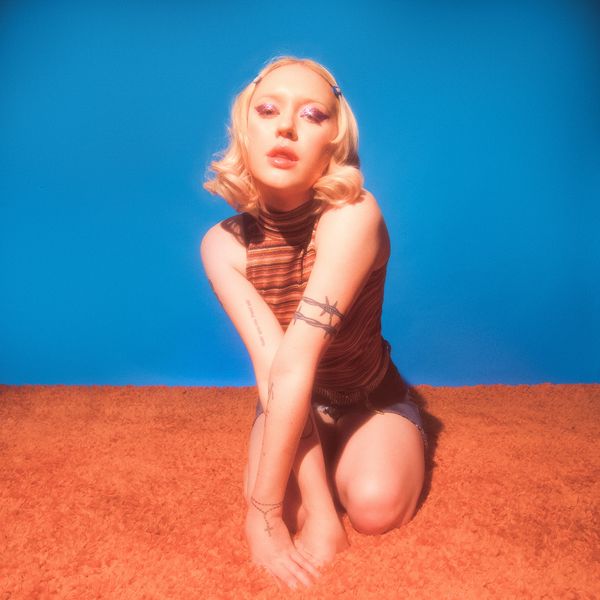 When Chloe Kohanski, now known as chloe mk, won Season 13 of The Voice in 2017, she immediately went to work on cultivating her next chapter. Just like her coach on the show, Miley Cyrus, she has re-emerged, reinvented and ready to show the world a side they haven't seen yet. Her new EP, Fantasy, is just as the title implies — a fantasy world beyond explanation, a deep dive into the crystalline waters of the outermost edges of pop music.

The most blistering tracks on the EP are the ones that talk about nostalgia but with a modern pop spin, the tracks sound futuristic. On "To Be Young," the opener, the retro-futurism contrast is no more evident than when chloe mk sings longingly for her youth, her vocals buzzed by the frequencies of the dance-pop instrumental underneath them. She is soaring above youth, above the present, into a glitching nostalgia that's enhanced by a bent-over melody. It's gloomy without being melancholic, and jovial without seeming content.

To fully understand Fantasy is probably to have been in the room where it was made — and from what chloe tells me, it was happenstance. The best art comes by chance, though, and the most glorious music comes from the purposeful collision of sounds. Not only is the debut project a pleasant surprise, but it's the direct result of years of listening, consuming, and testing on chloe's part.

PAPER sat down to talk with chloe mk about Fantasy, the impactful messages behind the tracks, and her foray into "gloom-pop."

When you were in Nashville were you involved in the music scene performing at shows?

It's a weird situation. I loved to sing my whole life, but it was never really — I don't even know how to say it. It was never presented to me as an actual career option. I was in a small town outside of Nashville. Nashville is a music city, but it's country music primarily. There's some cool pop music that's coming out. There's R&B and blues, but really I feel like it's going to be a while before it's anything but the country-pop hub.

I played shows, but honestly, there are so many musicians in Nashville that you pay to play. I didn't have any money. I was working at a coffee shop. I would play a gig every few nights, but it was a small place — maybe 20 people there. I never really broke through because I was never doing country music. I was always doing rock or folk, kind of the same stuff I did on The Voice. I don't play the instruments. I didn't know producers. I really had never dipped into this world until after the show. I was like, "I love this music. I'll always love rock music. That's a part of me. That's a part of my upbringing, but I want to take this moment. I can either just keep doing what I'm doing or I can kind of pivot and actually do something a little scary and put myself out there, go into a real studio and work with people who write for bigger artists that I listen to." I've always loved pop music. I've always loved indie, even electronic, even trap. I'm so inspired by all kinds of music, but there's never been a time like this. I was like, "I don't want to just get used to this one thing that I do." I'm obsessed with artists like Lady Gaga. I'm obsessed with artists like Lana Del Rey. I'm obsessed with so many strong women who don't just flex with one thing.

They wake up and do what they feel. This is my first time being able to flex and be like, "What do I sound like in this capacity — and do I love it?" Obviously, the answer is: "Fuck yes." This feels like I woke up and I'm like, "This is who I am." This is just as much a part of me as anything I've done.

I love the songs on Fantasy. Of course, you can hear the rock. You can hear all these influences, but you have a pop sensibility. Pop music is moving towards single releases, but you have this really great and cohesive EP. I'm wondering how you went about assembling that, choosing the songs for that, and what kind of mood you were looking for?

I'm pretty sentimental. I love specific moments in time where it feels like a change or a shift. I met the producer that I wrote "To Be Young" with a year ago right at this time. I had done so many sessions for a couple of weeks that were out in LA. I was working with whoever I could, trying to push myself and get out of my comfort zone and learn from everyone. It was so exhausting. The last day of the trip, I had this session with the producer. I was so over it. I was like, "I'm exhausted. My voice is tired. I'm tired. I don't know if I'm ever going to write." What's inside my mind is so hard to get out and communicate. I almost canceled this session. I came to find out the producer, who was Peter Nappi, he almost canceled the session as well. Sizzy Rocket, who I just opened up for on her tour, she was also going to cancel the session. We were all going to give up and cancel the session, and we walk in and within, I'm not even kidding, 35 minutes, we wrote the majority of "To Be Young," which is the first song I released.

It was such a weird mental space that I thought was so beautiful, what you do when you stop trying so hard or you stop feeling like you have to do something. We all just kind of gave up, did it anyway, and ended up setting the tone for this project. I was so obsessed. I was like, "This song. This message. This girl. Who is this persona? What is this story? What is this character?" I was freaking out because every time, I was like: "How are we doing this? How is this possible?" We obviously talked Republic, with my management team. We were like, "What's the best way to put these out?" At this point, we had so many other songs that we were working on. I know it's all about content right now, and I know it is a single release time, but this EP was such a specific time.

I was like, "Let's just put them out together so that people, even if they don't know that story, can experience the moment in time."

That's what makes this so cohesive. In my head, I kept calling it "gloom-pop." I was going to compare it a bit to The Weeknd, the record he put out back in 2015. There's definitely an overhang of a specific mood.

Whoa! I love that. Thank you so much! I never thought about that. I love that so much. I feel like we were spending some time trying to — that question obviously comes up. I'm not a huge fan, in any scenario, of making something feel confined or putting a label on it, but it is important. It's something that connects. Before people listen to your music, if they see a word or they see something that entices them, that is so important.

Absolutely. I feel like I say this about every song, but that one actually is so special to me. It's always a toss-up between that song and "Ride." Those are both my favorites on the EP. I don't know what it is about David Bowie. I feel like one day I was sitting and I was on Twitter. I saw someone say "I miss..." It wasn't David Bowie, but it was another artist who had passed away. They tweeted, "I miss." You feel like you know an artist and when they pass away, it affects you. If you're a listener and a true believer in this artist, you are changed. It's not the same. Then I immediately thought, "It's the same concept as losing someone in any form in your life." You go back and forth with the emotions of, "I love you so much/ I miss you so much," and then how you go through all the steps of grief. It can sometimes turn into you saying, "I wasted my time because you're not here anymore. I'm bitter and I'm hurting." I didn't want to do the poetic take of what that feeling is. That's why the chorus is, "You're not here/ It's not the same, it's not ok." Those things are just simple phrases, almost like you could send those as multiple text messages to someone. That simplicity of, "Don't overdo it." In whatever form, losing someone is a pain that you can't strive to make it. You can't overdo it. I can't claim to know what everyone feels, but I know in the ways I've experienced loss, and I know how I feel. I will never forget the day David Bowie passed away. I will actually never forget that day because I woke up in the middle of the night and it was the first thing on my phone. I had to lay there. It was almost like everything stopped. I hope people just feel like maybe if no one really ever heard their exact pain or their exact feelings, they listen to that and they feel it.

You made it a bop, too, though.

It is! You can also have a moment with it in a positive way. The main this is just feeling heard and feeling like "Oh fuck, this person isn't coming back and what do I do with this information?" Even the part where it's like, "I can't wait for you forever." You have to move on. Sometimes songs that are about losing someone, they don't always touch on that part. That's a huge part as well. You'll never forget them, but there is a human part of us that must move on, and that has an effect on your mental state.