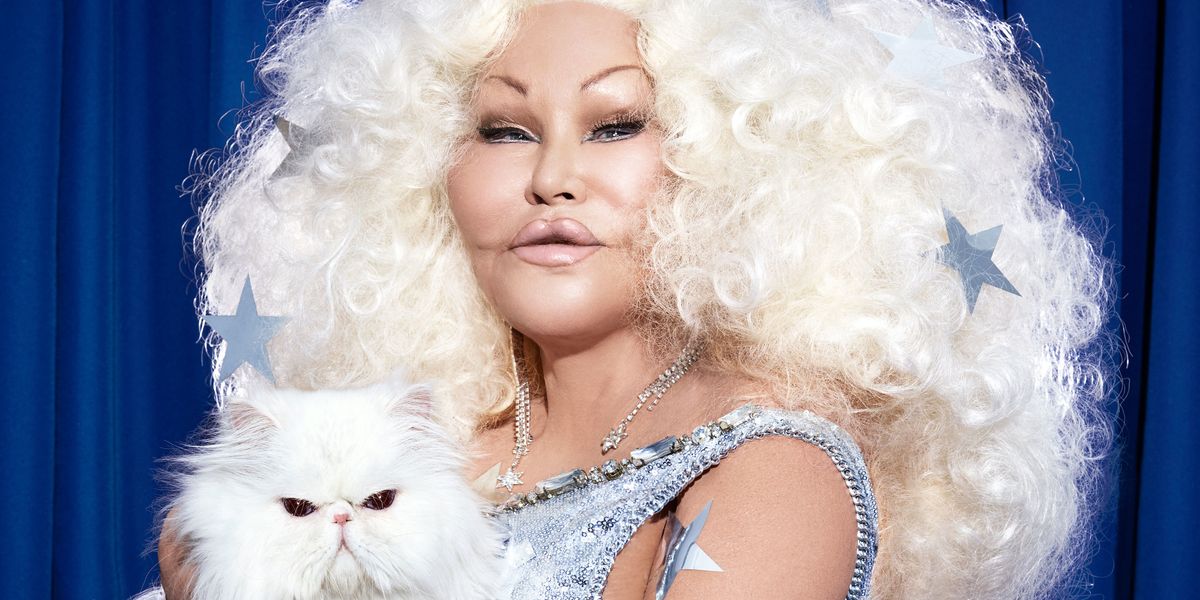 'Catwoman' Jocelyn Wildenstein Doesn't Care What You Think of Her

Despite appearances, the Manhattan socialite says that her ex-husband, who died in 2008, exaggerated the amount of surgery she had undergone, and credits her Swiss background for her high cheekbones and "cat eyes." Over the past 20 years, Wildenstein, 72, has largely disappeared from the public eye, and has since married fashion designer Lloyd Klein, 50.

PAPER sat down with Wildenstein to talk about her life spent traveling the world, building a game reserve in Kenya, cosmetic surgery and why she really doesn't care what anyone thinks of her.

PAPER: It's been a long time since you have done press like this.

When the children were growing, I didn't want to speak about the family. I didn't want it to fall back on them. But now they are adults, so I am free and can speak freely. But before so many events happening, their godfather died then their father died, then the divorce. So it was a lot for some 16 and 17-year-old kids. Now they're grown up.

Lloyd Klein: Tomorrow you can watch this. [Plays clip of TV interview with Wildenstein]

It makes me sad to see myself on the screen. We have pictures of ourselves in our head that are different than what we project.

Did you have any apprehensions about doing press again?

No, I don't think so. I am comfortable with it.

What was it like all those years ago being in the tabloids and having people talk about your personal life?

In the beginning, it's why I stopped correcting my appearance because the articles were mean and would repeat the image that my ex-husband tried to paint of me. We were together for 20 years, so it's a long time.

We were doing a lot of things and working in the arts together, which is a lovely job to do. We were also building a lot in Africa, so we had a great time together. And I don't know, you think you know a person, and then suddenly something happens and it's not the same person at all anymore, and you have a hard time believing they could change so much. You see such a different side.

How did you come to terms with that over the years?

It didn't happen over the years; it happened very very suddenly. I think it happened when my father was dying and I left to take care of him. He was buried in Africa. I went over there and, well, what can happen? Things happen in life.

You lived in Africa a lot of your life. Do you still have a connection to it?

Yes, I love Africa. I am very passionate about wild animals and I have a good approach with them. And we were trying to build a game reserve in the hill of very arid country. So we started from scratch to build the lake and also to put the irrigation with the water, you have to return the water to the river, you don't let it go wherever it could spread. You have to canalize this water to go back to its source whatever it is, so you learn a lot when building it.

And you were overseeing all of this?

How long did that take?

Twenty years. It was really perfect, very magical the way it ended up. Similar to the way you build your life with a partner, but it doesn't end so brutally.

It depends, we're traveling a lot. It's always been like this since I left school — a lot of traveling. I did a lot of camping in Africa, because what does it mean to go to Africa if you don't camp along the river and see the animals come to drink at the water? At night we would make fires on each side of the river that would reflect on the dark water. The nights were amazing. I think I was the first woman to win the derby riding camels in Africa.

Yes, because when you have your own territory you have to hunt, and you have to chase out from the game reserve the lions. You don't hunt them, you chase them out though because they're a beautiful animal and there are not as many as we think. You have more leopards than lions. That's inside the reserve. Outside the reserve everyone hunts, it's free. You could be sitting having dinner and then see 50 elephants coming across to drink from a little lake.

How did you develop a love for wildlife and that part of the world?

When I was five or six years old my father was supposed to leave to go to Africa to work, but his mother became very ill so he canceled the trip. One day he opened this chest and I saw all these books about Africa. At the time — this was 70 years ago when he planned this trip — it was the real Africa, not like now. It captivates your spirit, and it was always my dream to go over there. And I did, and I took him as well, and that's why he's buried over there.

What's a misconception about you, something that you wish people understood?

You know, in Africa, misconceptions never happened. They look at what you do. I worked with them, I stayed with them from when the sun rose to when it fell, and I built for them nice houses because you can't ask people to come to your nice house and they have nothing. But there is misunderstanding when you don't have a close relationship with people and they judge you from far away.

Do you feel like that's what happened with America and the press?

I am not going out socially so much now. I like big spaces and wild adventures, and to have new sensations. I love nature, for me this my greatest passion. The problem in the city is that we're constantly changing from one subject to another, and it cuts the connection. It's all separate in your brain, and it's not the same. It's why I like to stay for a long time in nature to create.

It seems like you're not so worried then about what the outside world thinks.

Cosmetic surgery is a much more popular trend now with younger women — supermodels and all. You were an early adopter of that trend, to say the least. Have you noticed a shift?

We speak a lot of plastic surgery because of my husband and the divorce.

Klein: Basically, he created that whole story that Jocelyn changed so many times and got surgery a lot. As a fault for the divorce.

Klein: She always looked like a cat, with the cat eyes.

If you look at one of my mother she has also the eye shape like this. This was a story, and it's something he chose very well because it stuck to me like glue. But the friends I had in Africa, or some friends I've had since we were 17, 20, 23 years old, they know me.

I have nothing to prove. In the end, I don't care.