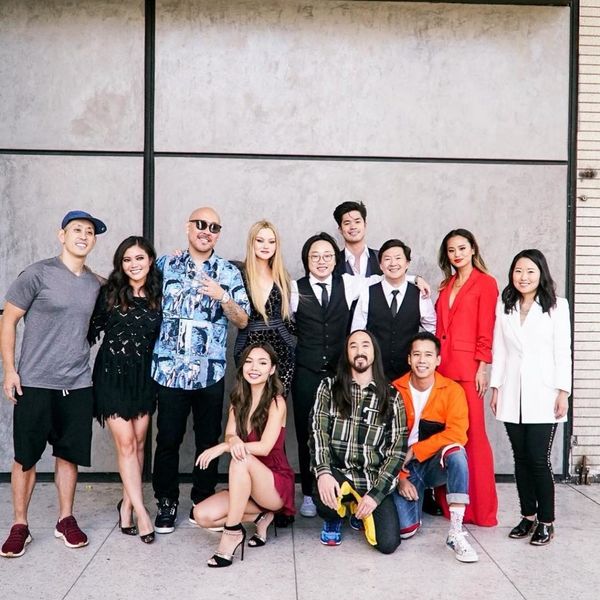 For the new video for BTS and DJ Steve Aoki recent sugary bop "Waste It On Me" (the K-pop giants' first fully English language song, though it's billed as an Aoki track featuring the boyband), the musicians enlisted a triumphant panoply of Asian-American celebs to bring to life a soap-opera worthy night at the club.

The scene? Actor (Riverdale, 13 Reasons Why) and BTS fan (he recently shared an acoustic cover of the song) Ross Butler and model Devon Aoki play a starlet couple, chilling in a VIP booth at the club, while Crazy Rich Asians and The Hangover actor Ken Jeong plays the role of a lowly waiter who falls in love with Aoki, pining for her from afar.

The video was directed by visual artist and Linkin Park DJ, Joe Hahn. Meanwhile, the song itself has been making waves, charting on the Billboard Hot 100, and marking BTS' first foray onto the Hot Dance/Electronic Songs chart.

Aoki chatted with People about his decision to enlist an Asian-only cast: "It's bigger than music and we hope to show other Asians they are also a part of the global commercial musical landscape. I feel so deeply about the Asian footprint in music culture that I wanted the music video to have an entirely Asian cast and director."

We brought out the whole family for this one. Just a little clip of @steveaoki and @BTS_twt music video for Waste I… https://t.co/azEXlDZp2g
— Ross Butler (@Ross Butler)1542477379.0

Please watch, and enjoy the particularly delicious moment when Butler and Jeong nearly get into a fist fight, as well as Jeong's impeccable execution of the "Friday"/Rebecca Black dolphin hand at 2:28.