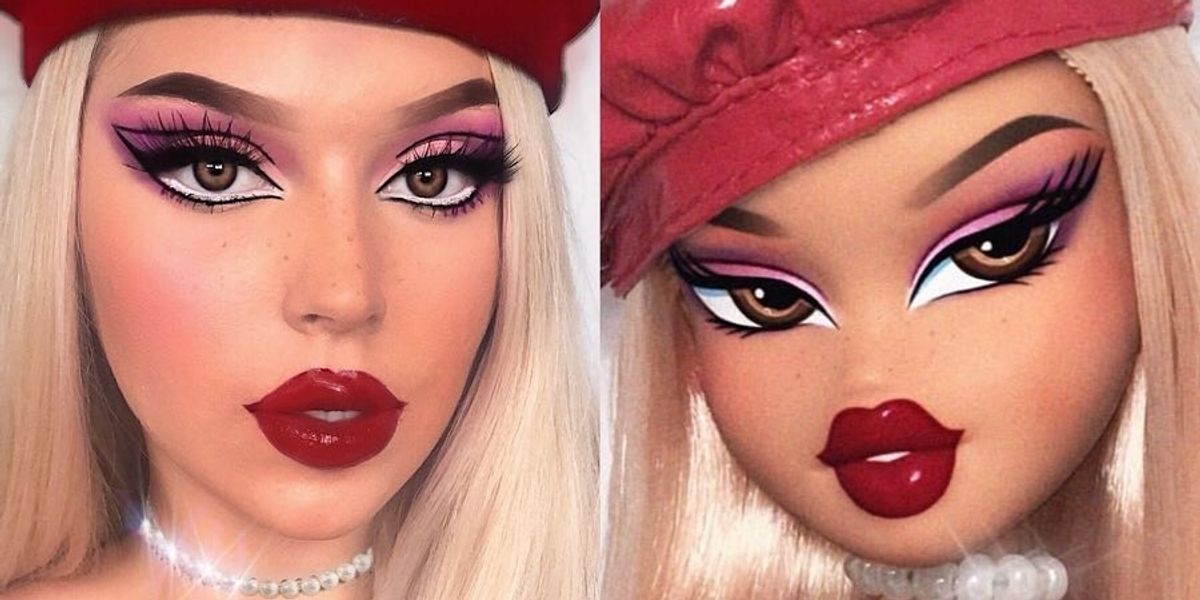 Early 2000's nostalgia, common knowledge of contouring, and our addiction to self-promotional hashtag challenges have collided to bring us the latest Instagram beauty trend: the "Bratz Doll Challenge."

A refresher: launched in 2001, Bratz were huge-headed girls' doll with glossy lips and bulbous cat eyes whose slogan was "The (only) girls with a passion for fashion" -- as well as a girls' media empire that included a TV series, five studio albums, video games, and a live action film. In the doll landscape (a phrase I've never written before) the multicultural Bratz gang (Yasmin, Chloe, Jade, and Sasha) was a sexier, sassier modern update classic Barbie — the Britney Spears to Barbie's Marilyn Monroe or Princess Diana. The two companies once even endured a legal feud over "trade secrets" once that we can only imagine was over a special edition mermaid costume or ponytail extensions.

Bratz on Instagram: “Which outfits are the fiercest? Comment 💙 for the first looks, 💜 for the second, or ❤️ if you just can’t choose! #Bratz #BratzCollector…”

In 2006, Bratz was earning $1 billion annually, and had stolen forty percent of the fashion-doll market from Barbie. Now, 18 years later, real life human beings are taking great pleasure in styling themselves like the dolls.

At the less extreme end of the spectrum, the Bratz challenge participants just look like they're in soft drag, or particularly zealous beauty influencers in full-coverage foundation, pounds of eyeshadow and highlighter, fake lashes, intense contouring, top-and-bottom winged eyeliner and a comically full lip.

And on the freakier end, participants are creating the illusion of the Bratz' saucer eyes, with make-up extending down onto their cheeks.

Gabriel Yire C. Castillo on Instagram: “Typically a badly behaved child, but not when she is high. #bratzchallenge”

In recent years, doll companies like Bratz have, somewhat clumsily, attempted to update their products to meet progressive standards and respond to the body positivity movement with moves like rolling out plus-size dolls, more dolls of color, and dolls of feminist icons. Artists like Crystal Kay and Kevin Ayón have taken the trend even further, creating and styling inclusive dolls with vitiligo, burn marks and natural hair.

This is where the #BratzChallenge has gotten less silly and more troubling. People, like the user below who dressed up as Kevin Ayón's vitiligo doll, have attempted to imitate the vitiligo dolls as a part of the challenge. Lauren Elyse, a beauty influencer and make-up artists with vitiligo, quickly called out the problems with using a medical condition as a fashion statement.

Another user transformed herself into the controversial Frida Kahlo Bratz Doll, which as well as her Barbie counterpart, has drawn legal backlash from Kahlo's estate and was even taken off shelves in Mexico.

Bratz might be having a moment, but not everyone within the online doll community is happy about the #BratzChallenge. According to a post by beauty vlogger Clawdeena, the Bratz photos currently trending typically aren't corporate promo material, but rather the products of elaborate photoshoots that take place once the Bratz leaves her box. The doll community is up in arms about the lack of credit being attributed to the photographers, stylists and designers — like Joel Davis, who created the Bratz photo in this article's lead image — when their photos, stitched to the #BratzChallenge participant's face, go viral.

It's initially a little disturbing that women are modeling themselves after cartoonishly beautiful dolls. But — copyright and insensitive looks aside — it seems that participants are genuinely having a lot of fun pushing the boundaries of make-up. Thanks, in large part to drag artists and the online beauty community, our understanding of make-up and body modification as an artform has transformed radically.

What's more disturbing is how eerily similar the participants in the #BratzChallenge look to regular, plain old influencers, for whom looking like dolls is an everyday beauty routine.

Enjoy a scroll through the #BratzChallenge hashtag on Twitter and Instagram and take in the glory of 2019.