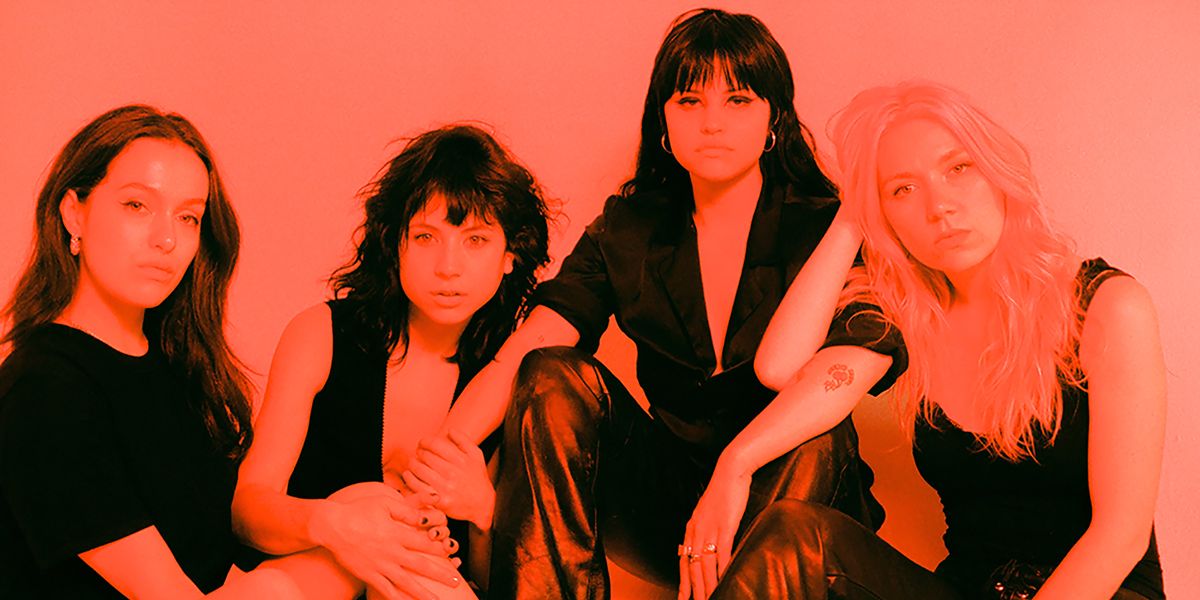 "I'm still too rock to roll," goes one iconic line in Nasty Cherry's latest. "Live Forever" is a bittersweet ode to immortality. Society tells women they should be forever concerned with beauty and youth. This scene-stealing quartet seems hellbent on defining their legacy by their choices, whether it's to feel good or to be free. The catchy song, anchored by a shouty chorus and experiential storytelling, is further elevated by Justin Raisen's vintage New Wave synth-driven production, reminiscent of past work with acts like Sky Ferreira, another electric artist who ably captures what it means to be a complicated woman in a fucked-up world. The spirit of "Live Forever" feels powerfully indebted to a long lineage of wild women who succeed on their own terms. If you're listening and thinking, "hell yeah," this one's for you.

Megan Thee Stallion's long-teased "Hot Girl Summer" is upon us, and at three minutes, it captures the most fascinating aspects of all three artists present. Meg is on her Real Hot Girl Shit, unapologetically sexy, standing up for other women, taking shit from no man, but doing it playfully, true to the spirit of her Hot Girl Summer trademark's friendship-oriented ethos. Nicki Minaj is careful not to outshine her mentee, while still adding her signature mix of fast flows and character-driven zingers. And hip-hop sex symbol Ty Dolla $ign plays a key role in singing the song's repetitive chorus, meant to be sung and heard everywhere. Together the three stars form a melodic soup atop hard-hitting Miami bass and a chic interpolation of City Girls' "Act Up." Their voices legitimately sound great together, and they all know it. But for Meg, "Hot Girl Summer," which promises to extend till at least October, shows her stepping more directly into the limelight that is rightfully hers. This song is, quite literally, a dream come true.

Bilingual, Dominican, and based in Los Angeles, Jarina De Marco has always fused her ridiculously catchy bops with her cultural intersections. For her this often entails a powerful message ("Identity Crisis" covers the phenomenon of skin bleaching in her native country), but it is always rendered with a winking sense of humor. Even in that song, in a cheeky character voice, she chides people who utilize such practices, calling them blanquitos/as. The results, whether De Marco is rapping, singing, or doing a mix of both, leaves one thinking, and still having a great time. "Knock Out," a new track from her debut EP Malcriada, out now, is based on a wild time De Marco found herself entangled in a huge fight in a strip club. The song flits between sun-dappled reggae grooves and call-and-response "way-oh" chants. It's very early Santigold meets "Hollaback Girl" teas, but again: De Marco's stories are entirely her own, expertly woven into a warm, vibrant tapestry of sound.

Is it okay to openly stan Lana Del Rey as much as I do? It might not be the healthiest thing in the world, but I think what I stan even more than the woman herself is her brand consistency. Having introduced enchantingly witchy themes from the beginning of her career, haunted vocal quiver and all, it's only right that Lana, non-follower of rules, now decides to fully lean in and make things literal. She is, after all, a writer! Building worlds around her world is what she's best at. So! Lana's "Season of the Witch" cover of the 1966 cult classic tune, makes no bones about being spooky. It is also the actual soundtrack to a horror movie, Scary Stories to Tell In the Dark. As all Lana covers are, she remains loyal to the essence of the original, but what makes this special is that Lana is singing it. That makes it automatically distinct, in my humble opinion. With added swells of haute couture drama, of course.

Awa and producer/guest vocalist Ebenezer make modern day magic from the tried-and-true melodic gold of '90s R&B. And though it seems everyone is inspired by Aaliyah and her ilk these days (as well they should be), it would be too simplistic to say that Awa isn't adding her own flavor to the mix. An acoustic guitar is at the heart of this song, but it creates plenty of room for Awa to admit "I write better when it hurts." As Awa sings her lines in birdlike falsetto, she runs amok on ad-libs, creating full-bodied harmony out of ghostly, faraway trills. "I just want your worst," she sings, knowingly contradicting that she's at her best. The best "Fuckin' Love Songs" possess this sense of contradiction. Tension makes the heart grow fonder.

Kirby is a Southern-bred, self-proclaimed granddaughter of soul, who eschews labels like "singer" or "songwriter" in the interest of healing others through music. Call her a song therapist, then, because "Kool Aid," Kirby's third single, provides spiritual healing of a more sensual variety. "I'm sweeter and you love it," she coos to a love interest who is "dressed cleaner than a sundae." (Or is it "Sunday"? Either way, you catch her drift.) "You can't buy this at the corner store," she concludes each chorus, set to propulsive drums and atmospheric organ. Kirby is straight up with lovers and listeners about how rare she is, which I'll bet lures them closer.

Hip-hop boyband Brockhampton's second single from their fifth album Ginger, out later this month, enlists a tipsy horn section. Think the opposite of a Beyonce Homecoming experience, and more Nina Simone's moody blues. Funny, because "If You Pray Right" is a 2019 flip (or sorts) of Simone's song of the same name. The five-minute track, also boasts elements of space-funk, like the wacky hip-hop experiments of the early aughts i.e. Andre 3000's The Love Below. Curious yet? Click.

Ruel is a teen singer-songwriter from Australia who seems poised to melt hearts everywhere. Judging by his latest single "Face to Face," he just might. The song has a retro soul feel, but tells a very modern tale of crushing on someone through a screen and the fantasy born from digital romance. "I messaged you yesterday/ Haven't heard back yet," Ruel sings, capturing the anxieties in teen and Millennial hearts alike when waiting for a reply that may never come. Sigh.

Newcomer Tamera channels Bonnie and Clyde-style love on "Romeo." Her alto floats into dreamy falsetto when pleading undying devotion ("I will never leave you out"). But for Tamera, love isn't a game. Her voice's raspier tones ground the song, complemented with dead-serious lyrics: "It's a ride-or-die situation." Threading it all together is a solemn sense of jazz, with Tamera playing potentially tragic chanteuse. For music this cinematic, we want to know what happens next for Tamera.