In a dimly lit, intimate venue in downtown Toronto, several Black Muslims, decked out in extravagant Eid outfits, gathered to celebrate their first IRL #BlackOutEid moment. The night was serene and filled with poetry, Afrofuturistic DJ sets, and servings of chicken and mac and cheese, before turning into a joyful Eid fashion show.

Eid, one of the most important Muslim holidays, occurs twice a year — once after Ramadan, and the second time after performing Hajj (pilgrimage to Mecca). #BlackOutEid started four years ago as an online space to actively make visible Black people in the Muslim community during Eid celebrations. The hashtag #BlackOutEid continues to build each year as a way for Black Muslims worldwide to stunt their glamorous outfits and connect across borders. Last year, it transitioned from an online community to an IRL event in London, England before making its way to Toronto. Organizers of the hashtag and the #BlackOutEid events in London and Toronto are actively compelling us to think through the importance of space for communities that are often rendered invisible, especially for those marginalized within already marginal spaces. 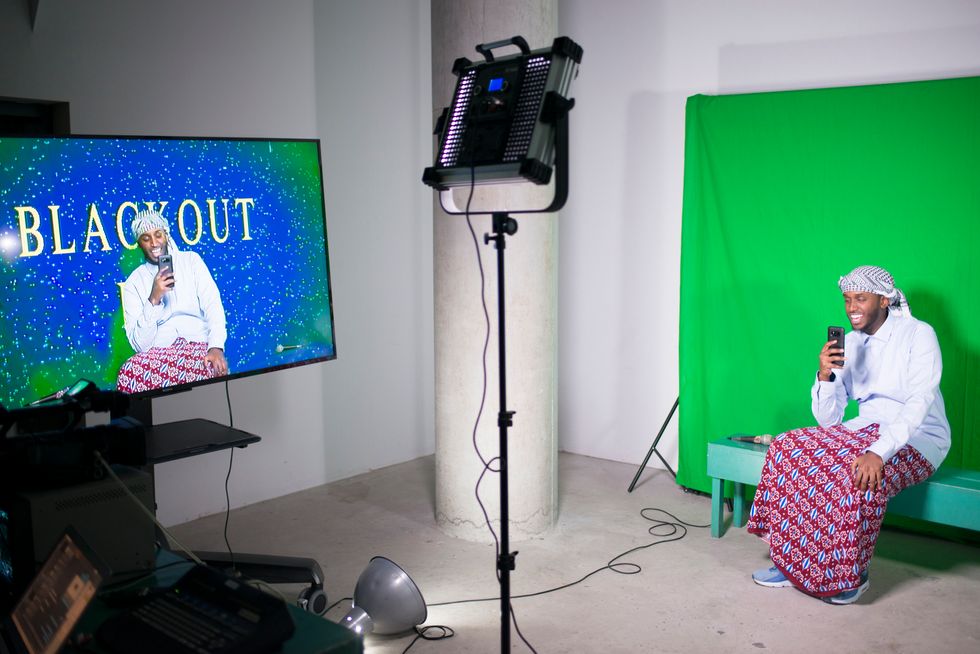 Growing weary of this erasure, a screenwriter and producer in Minnesota, Aamina Mohamed, started #BlackOutEid to cultivate an online space to see visuals of her community through selfies. Four years later, and across continents, Black Muslims continue to connect with each other while sharing their elaborate outfits in honor of their faith through #BlackOutEid. The event "gains more momentum each year," says writer Najma Sharif.

Toronto, a city that has a large Black Muslim population, is the perfect backdrop to bring a sacred online space into a real, archivable moment. The showcase shared talents across creative forms: Canadian award-winning poet and author ("An Anthology of Grief: Or the ways a Somali woman loves"), Ifrah Hussein; Toronto's Afrofuturistic producer and beatmaker, Obuxum; DJ Hangaelle, who brought rap, trap, and Afro-beats to the room, and the soul-bearing singer, Faiza, who single-handedly took command of an entire room with her fiery vocals. The event was hosted by local playwright, Fatuma Adar, and was streamed on BUMP television, a 24/7 public access internet television station that operates from a studio in Toronto. 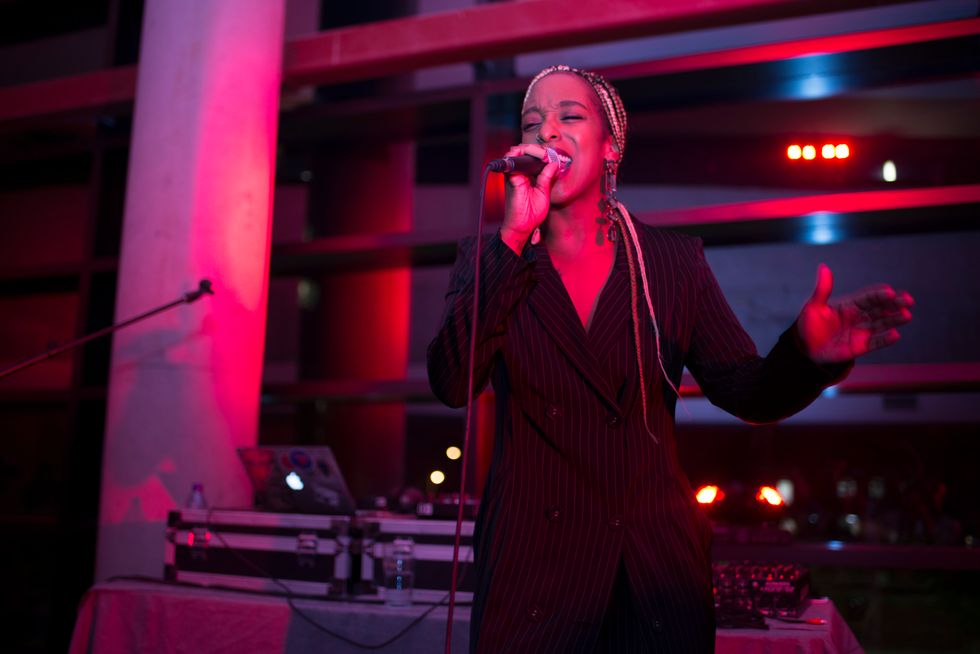 "It was my first time playing in a space where I felt like I automatically belonged," says Obuxum, one of the DJs of the night who embedded drops of Somali influences into an electronic set. "I love how storytelling is huge in Somali culture. Ahay gave me that hope."

Ahay, a group of Black Muslims in the city, collaborated with North by North East (NXNE) to put together this space that Black Muslims and their sister-communities could enjoy. The collective includes Nala Ismacil, a multidisciplinary artist and DJ, Ebyan Abdigir, a journalist and CBC producer and Said Yassin, a founding member of Toronto's DIY charitable party institution, Dudebox, and a founder of concert series "It's OK*." #BlackoutEid was co-organized by Abdifatah Hussein, a community organizer from Scarborough.

"For me, [Ahay] is a way of life," adds Ismacil, who warmed up the crowd for the memorable night through a DJ set. At one point in the night, the crowd made space for a small runway for audience members to participate in a fashion show, strutting their various colorful Eid outfits."I spoke with [Faiza] after [the event]," says Ismacil. "She performed the song called 'MashaAllah.' She was saying that she had to perform a lot recently, but this was the first time she performed that song because she's been in a lot of white spaces. She didn't feel comfortable performing a song that means a lot to her. That's exactly what [we] wanted. We wanted the audience to connect with the performers. The fact that that happened was just beautiful." 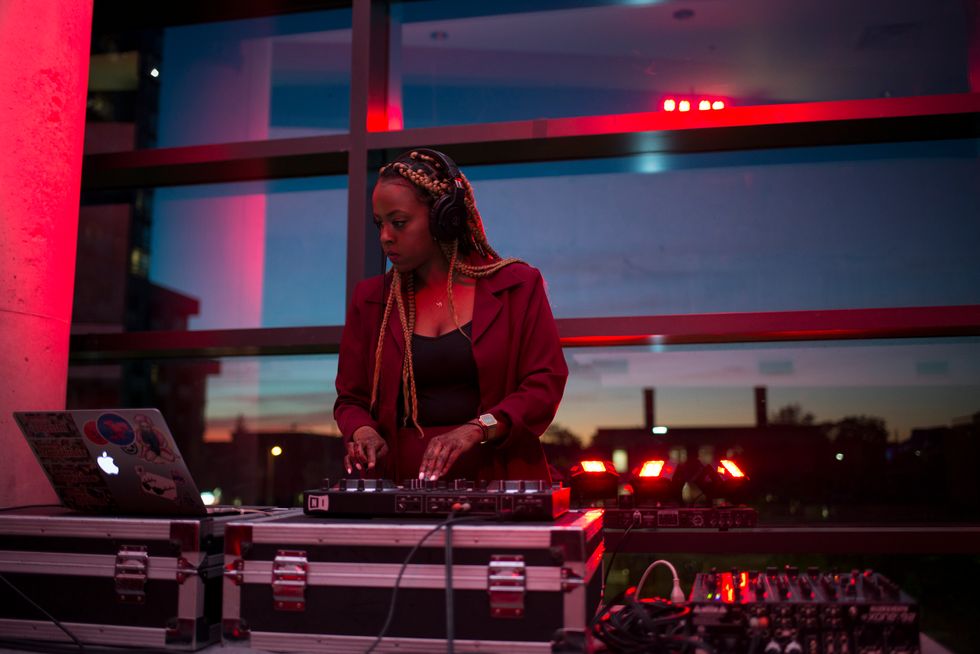 The first IRL #BlackOutEid event took place last summer in London, England. It was hosted by a collective, a majority of whom are Black Muslims: Neimo Askar, Fahima Hersi, Ajan Abdullahi, Idil Abdullahi and Najib Ahmed. Considering the reality of anti-Blackness that is rampant in Muslim communities, hosting Black Muslim-only events troubles the feeling of not being secure in celebratory Eid spaces: "Letting people have space where they feel safe should be our primary goal, and we should aim to keep creating spaces for people that are excluded in one way or another… [I]t can only be solved by listening to Black Muslims and challenging those mindsets that perpetuate anti-Blackness in mosques, households, and even within family and friendship circles," says Askar in an interview with Amaliah.

As a Black muslim woman who has always called Toronto home, I left #BlackOutEid with a bittersweet feeling. I was enamored by the familiarity of my community in a creative, and halal setting, in the midst of downtown's party core; but disheartened by how long it's taken for me to witness a space in a city with such a large Black Muslim presence.

Unfortunately, the opportunity to cultivate all-Black spaces that are dry and welcoming to Muslims of faith can be met with pushback — a sentiment expressed by both Ahay and organizers in London. "In Toronto we're seeing that venues are being closed, and for the very few venues that are around, there are only so many compared to the number of people doing these events," says Abdigir. 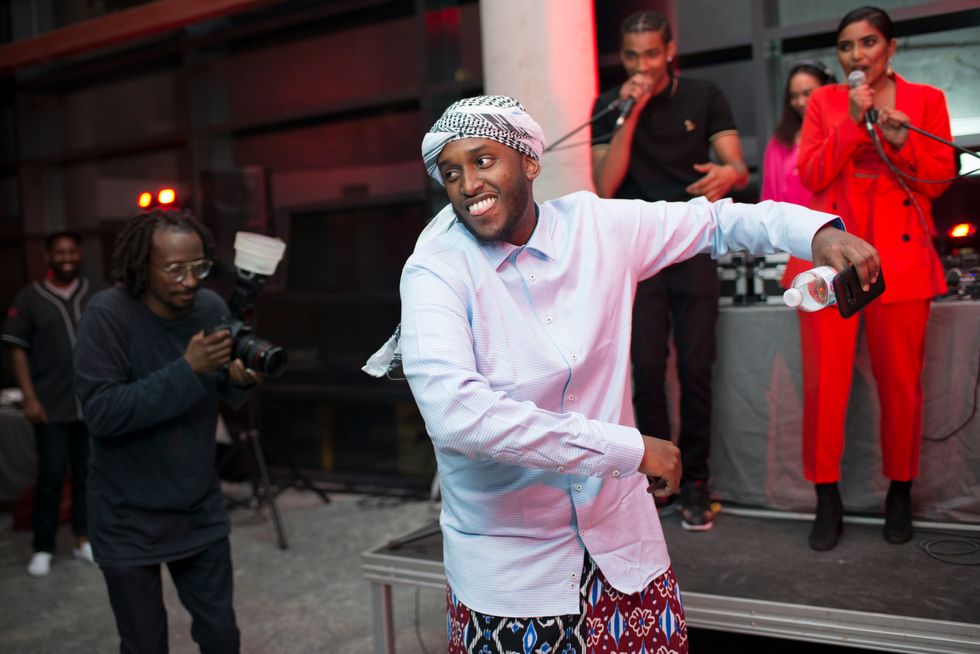 Abdifatah Hussein during the fashion show 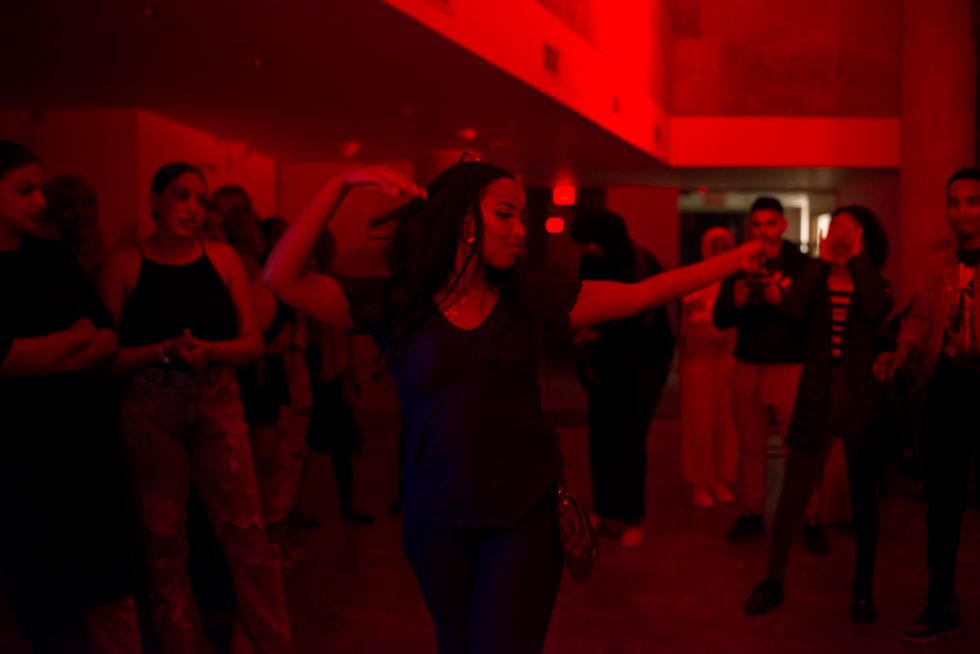 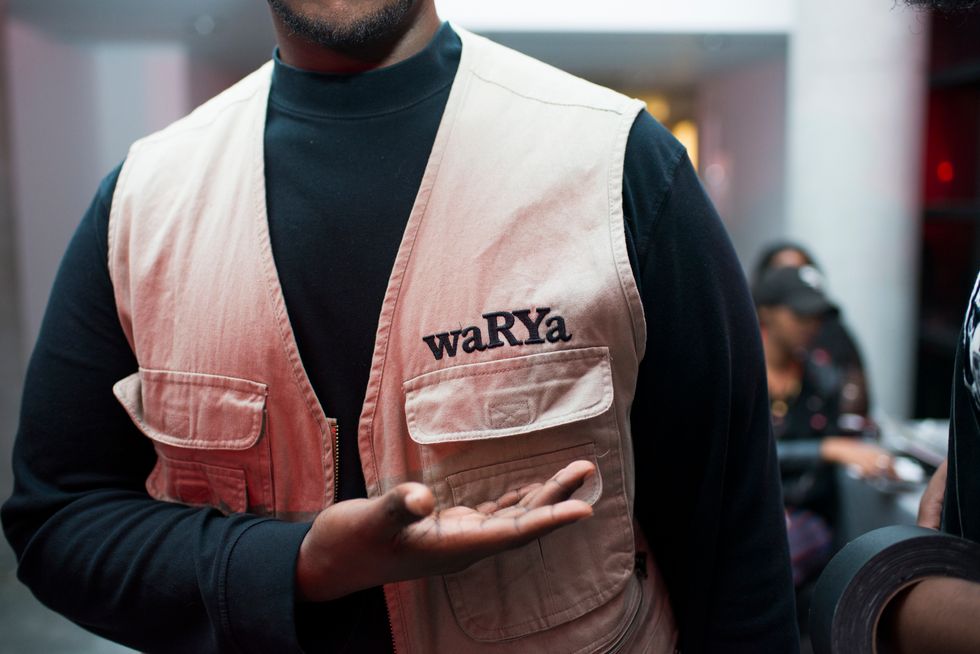 #BlackOutEid served beverages and food provided by Fatima Khalibre of Khalibre's Cookhouse, but being a dry event was something Abdigir identified as a disadvantage in the process of planning, as venues are often interested in the possibility of drink sales. This often leads to the exclusion of Muslim-majority spaces in downtown Toronto. Ahay's emphasis was on cultivating a space for Muslims to feel safe enough to enjoy a Saturday night out in the bar scene, while being in a space that doesn't center around alcohol: "[#BlackOutEid] shows that dry events can be profitable. When we're thinking of [the closure of] spaces in Toronto, we're not thinking about the ones that don't exist," says Abdigir.

Ahay is interested in filling that gap, collaborating with spaces like Toronto Media Arts Centre to create DIY events to create space for underrepresented communities in a largely racialized metropolitan.

"Ultimately there is an erasure of Black Muslims in the world, and within the Muslim community," says Ismacil. "We are heavily surveilled because of anti-Black racism, right? So why don't we go the way of celebrating our faith without having to negate our Blackness."

Whether it's London, Toronto, or in the online sphere, Black Muslim women are finding concrete ways to actively counter invisibility by imagining spaces that are liberating for themselves, as well as other communities. Hashtags give us the ability to easily connect with one another throughout the globe on an online medium. And despite how sacred that is, we need to consider the importance of shifting these meaningful online connections to create real, physical spaces for communities existing at the margins. Black Muslim women from London, Toronto, and Minnesota are providing us the tools to rethink the ways we can occupy spaces for ourselves and archive it. 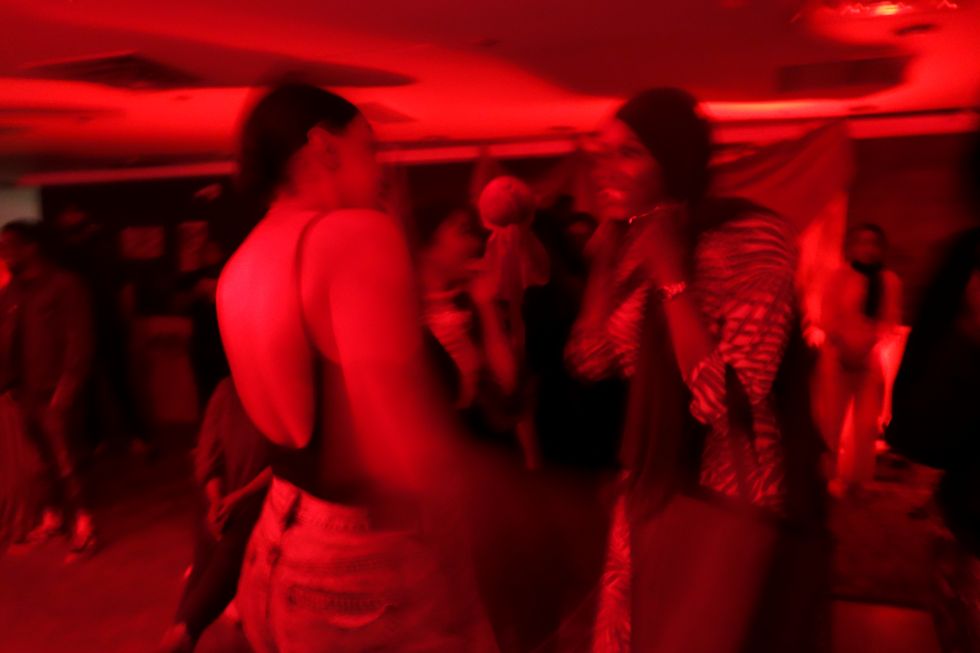 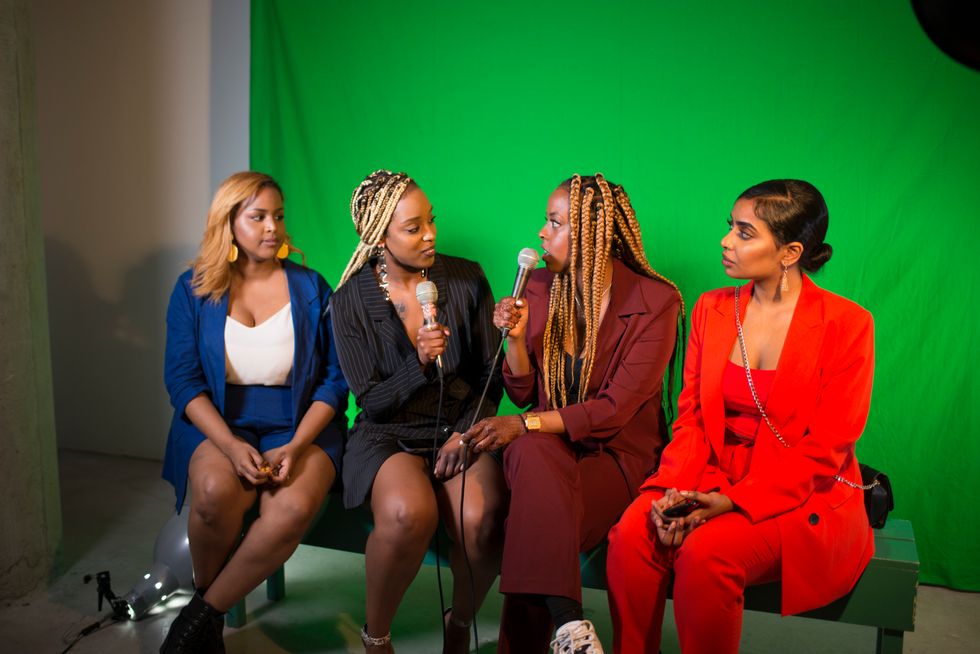 Huda Hassan is a writer and teacher based in Toronto.