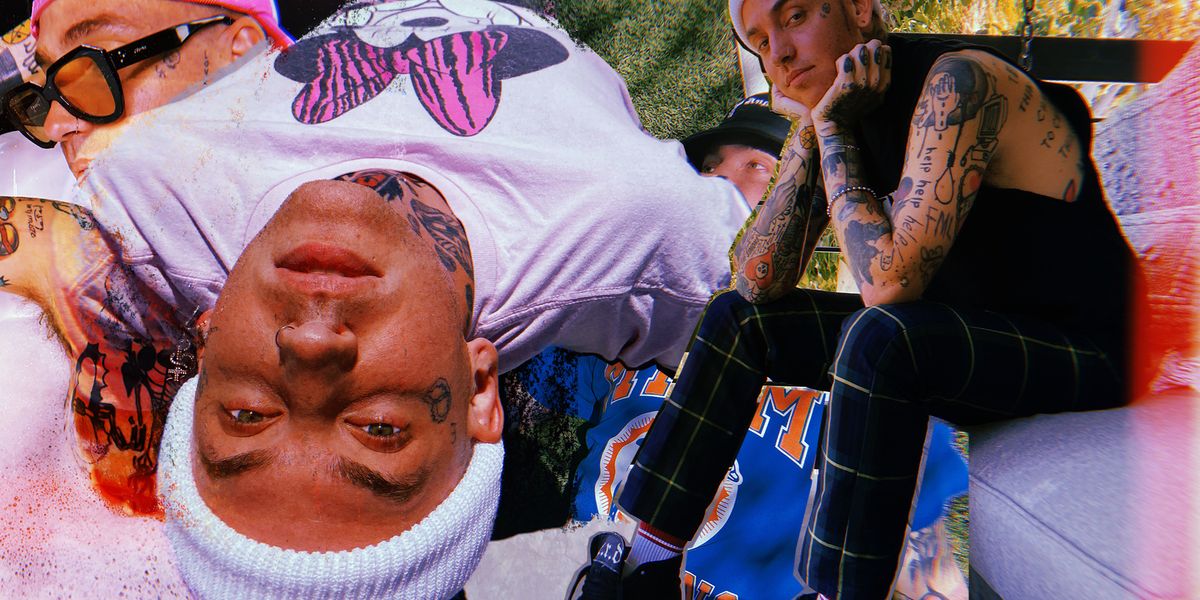 blackbear's "hot girl bummer" came out last August with the abrasive hook "Fuck you, and you, and you." It quickly earwormed its way into Megan Thee Stallion's zeitgeist, peaking at number two on the Billboard Mainstream 40.

A year later, the season truly is a hot girl bummer, and the artist's album everything means nothing is perfectly poised to take advantage of the continued collective flush down the psychic toilet. The album's already enjoyed a moment near the top of pop charts, proving that its songs about "sobbing in cabo" and feeling, variously, "bad," "2 much," and "that" appease something deep in the reptile brain – probably helped out out by its "chill beats" vibe and sticky melodies.

We called blackbear at his home on the outskirts of LA to talk about the continued impact of "hot girl bummer," the internet and how fatherhood has changed his perspective on music. The singer will perform a virtual concert from the Hollywood Roosevelt Hotel, livestreamed via Moment House on October 21. Pre-sale tickets are available, here.

You've said in the past that your recent album titles have been odes to the internet, can you tell me how that applies to everything means nothing?

The previous album titles are odes to the internet, but this one in particular is an ode to my real life. Because the album has so much to do with the internet, with the age of social media, I wanted to title it after something real in my life. I realized the real, good things in my life, the real hit records, are my son and my family who loves me, and my team around me that works hard every day. Those are the real things in my life, everything else means nothing. And it's obviously a breakup album, so everything that once was means nothing now, so it's kind of an emo title as well.

Is it about one breakup?

Yeah, the bulk of it is about one breakup. And then "sobbing in cabo" is actually about my current girlfriend. She called me crying in Mexico, and I wrote a song about it.

"queen of broken hearts" and "hot girl bummer" are both in part about the ways we relate to each other over social media — what about the internet interests you?

How it affects mental health so much. I have some kind of obsession, and I think a lot of people share this as well, with checking my mentions on Twitter, checking my comments and reading Reddit. I'm really attached to what everybody's saying, and being a part of the conversation. I think that this album represents that need to be a part of [the conversation].

"hot girl bummer" came out about a year ago. Did you expect that song to get as big as it did?

Exactly a year ago yesterday, or the day before. I expected it to be a pretty big song, but not number two in America. I did not expect it to even go top ten. I did expect it to be, like, a top forty song, I won't lie. When I made it, I was like "I need to make another single, like a banger like 'do re mi' that does commercially well." I really wanted to do that, so the intention was there to have a big song, but I never expected it to be so big.

Why do you think it resonated?

Did the writing process for everything means nothing start with "hot girl bummer"? How does the song sit in the album?

At the time we were just making songs because I was off tour. There was no plan of making an album. But within the next week, I made the first three tracks of the album: ["hot girl bummer"], "me & ur ghost," and "queen of broken hearts." At that point, I was like, we're on a roll. We might as well make more. I was really back and forth about where to put "hot girl summer" on the album. I decided to just put them all in the order that I wrote the songs. It's a really interesting way to start your album, a lot of people don't do that. It's just that's the way it came out when I wrote it, so I wanted to reflect that in the tracklisting.

Can you tell me a bit about the "i feel" trilogy in the middle of the album?

They were actually written pretty spread out. It was a matter of like two months, not like the first three. We did "i feel bad" the week after that first week. We were finally like "maybe we should work on an album." "i feel bad" was the first one definitely toward an album. As for "i feel 2 much," I've been going through these procedures I have to get every two months for my chronic pancreatitis. I have this stricture in my small intestines, and the doctors can't figure it out, but we're doing these therapeutic surgeries. I have one coming up in a couple days actually. It's really, really painful, and I wrote "i feel too much" and "i felt that" basically about physical pain, not emotional pain.

You've written about your health problems and the emotional tumult from relationships in your previous albums, too. How do you make sure that you maintain honesty in your writing?

If I keep those two connected, the pain from emotion and the pain from my actual health issues, that's how I keep my honesty. I just have to check myself. The fact that I'm pulling from that same spot is how I keep it honest, and I know that's really deep, but I don't know how else to explain it.

Do you ever have any difficulties trying to write from that difficult space?

Not on this last album. This last album came out really easily. I had a lot of shit to get out, a lot of hurdles to climb. I kind of just had to say sorry to someone, and I had to say sorry to myself. I had to forgive myself and move on, and this album did that for me. Hopefully it does that for the next person, too. So that kept it pretty easy. I don't know, going forward, what it's going to be like. I definitely think the lyrics will be less sappy from here out. I think I got my sappy shit out of my system.

You're recently a father, right?

How do you see fatherhood impacting your music and career going forward?

A few albums back you mentioned that you might be pointing towards an early retirement. I think you said that music was more of a hobby to you than a career. Is that still your frame of mind?

No, not at all. I suffer from pretty bad depression, and when that interview was taken it was really hard for me. I was depressed and anxious and was like "I don't know if I want to do this forever." With this album, the fact that it's been number one in pop for six days straight now, just goes to show that it's doing something for someone out there. Even if it's not for you who's reading this, it's for someone, and that keeps me going.