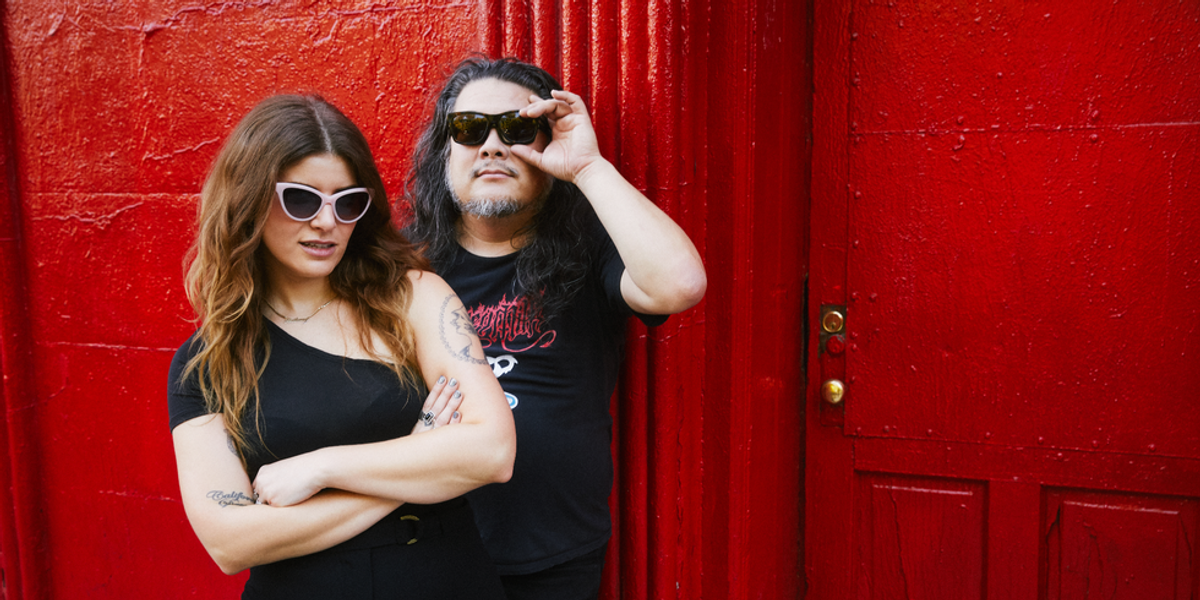 If you're a New York native that finds yourself triggered by the concept of shimmying behind the wheel or summer all year around, be prepared to change your ways. LA-based alt-rock band Best Coast, composed of dream duo Bethany Cosentino and Bob Bruno are sonic sunshine. Their sound will instantly conjure images of all your favorite cult 90s romantic comedy classics, think Cheap Trick, No Doubt, or a edgy, more-relatable Beach Boys, that is somehow manages to simultaneously project romance and irreverence.

Most impressive of all, however, the band's longevity — mostly owed to their inimitable rapport. After almost a decade in the game, Best Coast can boast that they are truly one of the industry's most sought-after and celebrated twosome in the business. This, of course, has a lot to do with Cosentino and Bruno's respective talent as individuals, but together they have a real creative connection. Even after so many years, one will self-consciously send the other the bare bones for a potential song, only to have their partner exclaim it's genius. It's evident in their sound that they approach each track like it might just be their break-out hit, quickly realizing their on to something when they can each play it for days on repeat. Their creative energy is both endless and enviable — as well as a real testament to their chemistry.

Dropbox believes that extraordinary things happen when diverse minds come together, so we caught up with dreamy duo Best Coast to talk their unique meet-cute, Hilary Duff standom and hear how they fuel each other's creative energy.

I have to mention this because I don't hear of it very often, Beth, you started in a drone band right?

Cosentino: We actually both did. We were in that band together. He was behind the scenes more, that was really the first time we met, collaborated musically, and hung out.

So how did that initial meeting come to be? How did you guys pair up?

Bruno: We met before that band happened just through mutual friends.

Cosentino: The first time we ever met was at a party where a girl tried to jump out of her window.

Cosentino: We both didn't know what was going on, but we kind of kept it cool so we survived. Our first meeting was some weird wild time that may say something for our relationship.

Did kick off like, I do music, you do music, let's hang out?

Cosentino: We just have the same friends. We also have a lot of the same interests. We both really like weird pop culture stuff.

Can you give me an example?

Cosentino: Back then we were really into—

Bruno: The first time we hung out one on one really was the movie with—

Cosentino: No. We watched the movie with Hillary and Hailey Duff. We went to see that in theaters.

Cosentino: Material Girls! Such a classic.

I mean a shared passion for Hilary Duff is a great basis for chemistry. What else makes your connection unique?

Cosentino: Yeah, I think our chemistry is unique because we're really close but we also don't spend a lot of time together outside of music. We really love and appreciate each other and our humor together is what really helps us. We're kind of mean to each other but in a lovingly teasing way. The thing is that we know when the other person is in a mood. He's also super supportive if I'm having a bad day and vice versa. We're really good friends that don't always hang out and also love to roast each other. I feel like it's a brother and sister sort of thing.

It's so funny because I feel like we don't get to see a lot of duos out there, with artists in particular egos often run amok. In bands they need more people around to distill all the different personalities. It's actually quite rare and amazing to see bands made up of a pair.

Cosentino: I think it's a good balance. A lot of the time it's me in the spotlight or whatever but Bob doesn't mind that. That's a difficult chemistry to find because sometimes you have one person that gets more of the attention and the press while the other person is bummed. That can cause weird drama but he's usually like, "Are you sure they want me to come?" Bob would rather stay home but at the same time, he's such a huge part of what we do. I just think we have something that's really rare and special. The way we keep it tight is by not being on top of one another when we're not making music.

Do you find that each of you take on a certain creative role? Does one of you take the lead on a melody while the other concentrates on lyrics?

Bruno: Beth primarily will write the skeleton of the song then she'll email me or send the file. We're changing it up on the next record where I'm writing things of my own and sending it to her. We're just trying to change things a bit.

When you're not together, how do you communicate? Is it all sending files back and forth over Dropbox?

Cosentino: Definitely, and text, email. It's cool because in the past everything was my thing, I did everything and I would send it to him. His role was really to take it and finish it. It's a really cool thing. He always knows how to make the songs that I write sound really cool. As we've evolved and made more records we've started to try things differently. I asked Bob, "Would you try to write some stuff on your own then send it to me?" The funny thing is that we're both self-conscious and not super confident. Sometimes I'll send him something that I think is awful and he says it's so good. When I started to ask him to write things he told me that it might suck, then when he would send them they were super good.

What is the thing that really gets you going? What gives you the "eureka" moment?

Cosentino: If it makes you feel happy or changes your vibe. If you feel like your mood shifts that's when something catches me. If somethings really catchy and theirs this part you can't get out of your head that's when I know. I just feel like in the studio a lot of times one of us will do something and it's just stuck in the other's head for days. That's a good sign.

I'm curious what success looks like to you two, because you've done so well and could even be considered veterans in this industry by now. Do you feel like you've made it?

Cosentino: Yes to some extent.

Bruno: We don't have to work. We haven't had to work almost since the band started which was pretty incredible.

Just the response was crazy from the outset?

Cosentino: Yeah. We toured a lot and we worked for the cool opportunities that luckily afforded us well. For me, playing shows and having a room full of kids sing back to you a song that you wrote five years ago that you can't personally stand anymore because you've heard it so much, you see how psyched they are to sing it, that's when I know that we've done something big. I'm a 90's kid. Bob and I have some of that weird pop culture stuff in common, but he's much older than me so it's cool that we have that juxtaposition of his knowledge with the cooler older stuff, and my knowledge of the teeny bop stuff.

What went into formulating the sound?

Bruno: Beth had clear ideas before we did any music together. She just wrote to me about what she wanted to do.

Cosentino: We'll usually go into something with an idea but a lot of the time it changes as we go. But when we started I had a specific idea in mind. I wanted it to be girl group inspired but also kind of punk. I grew up listening to a lot of pop punk. That was also another thing we bonded over which was Phil Spector and 50s classic pop. The people we were in the band with didn't even like The Beatles and we just thought, What the fuck? How do you not like The Beatles.

Have you felt any pressure to evolve with the times?

Cosentino: I do. I don't think he does. I get self-imposed criticism of myself. I've noticed the harder you try to change something, the more obvious it is. The best route is to be organic with what you do.

Do you ever have to check each others egos?

Bruno: Through our jokes but it's not a conscious thing. It's not really checking egos, were always just making fun of each other. Having that kind of vibe we never have to check each other. It's like a weird psychic connection that's weird sometimes.

Learn more about why the world needs your creative energy below.