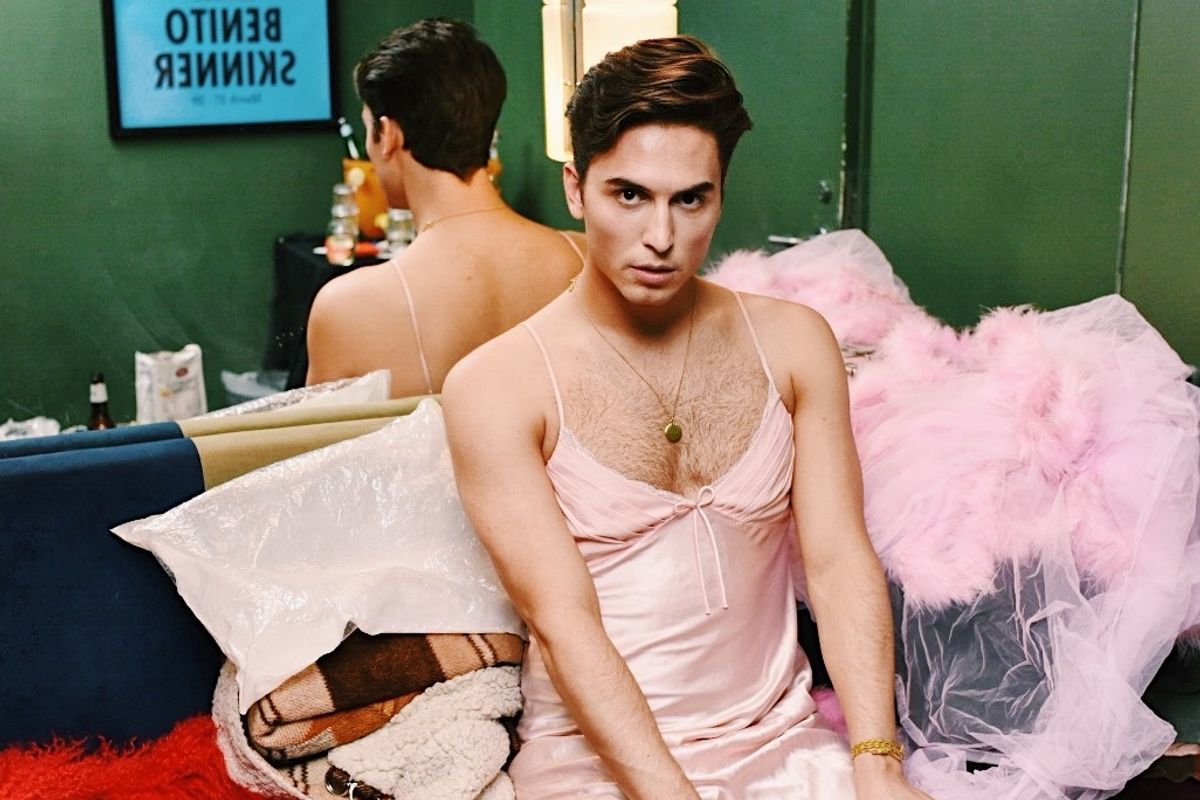 Benito Skinner, aka @bennydrama7, is no stranger to the chaotic duality of the internet — the good, the ugly, and everything in between. After years of being forced to repress his love of pop culture, celebrities, and Hilary Duff, no hater will be able to temper his uncanny ability to spoof it all via his unique brand of observational comedy.

Most recently, the 25-year-old, Brooklyn-based actor/comedian completed a tour of his live show and is in the process of creating even more content for his nearly 400K fans. Given the success of his viral Antoni impression and our obsession with his astrology dating series, we wanted to find out a little more about the man behind Benny Drama.

So ahead of his final show in New York, we rang him up to talk everything from Drag Race to the social media divide, and everything in between.

Let's start with the basics! Who are you?

My name is Benito Skinner. I live in Brooklyn, New York, and I'm 25. I'm from Idaho which is hilarious. I played football in high school — I did the whole thing.

Yeah, the whole thing. I was wide receiver, which has lent itself to so many jokes since I came out. I always say that in my live shows and it's silent, but then there are a few gays laughing. They know what it's about.

I love it. On that note, tell me a little bit about how you got started doing comedy and decided to make this your thing.

I always loved performing as a kid. When the "Oops!...I Did It Again" video came out, I learned all the dance moves, including that middle interlude where she talks about the lady jumping in the ocean — I had that whole scene memorized. I'd perform it for my whole family wearing a bucket hat and a vest — a whole look. So I've always loved performing, acting, doing impressions, and entertaining people. But then I definitely started getting made fun for it, so I sort of hid it away. I just locked that shit up for most of my young life, which was really sad. During college, I came out my senior year and I had started writing sketches. I studied acting, english, and film/media studies. I knew I wanted to do something in film, but I was too scared to be in front of the camera, because I was like, "The internet's gonna say I'm gay."

I was terrified of the internet for a bit, but then I just started recording myself lip syncing and then I started talking in videos and then I came out and saw it kept growing more and more. The internet is a scary but also incredible place where things can take off so quickly. It just kind of blew up and it's been so much fun to reintroduce myself to that younger version of me. I feel like I'm allowing myself to love the stuff that I previously hid. So now I can make the Britney video, a Lizzie McGuire video...

Oh my god, literally that entire movie, start to finish, is my favorite movie of all time. It's so bad-good. It's a masterpiece. I just need to sit down with her... Actually I don't think I could do it without crying. But she is just so present in all the work I do — she pops up all the time. She's in the live show a little, I did the igloo dress for halloween, and then I did the "What Dreams Are Made Of." I can't stop.

I'm so glad you're finally able to embrace all the stuff that meant a lot to you as a kid!

And now I'm not getting made fun of! People love that nostalgia, and it's so fun to be like, "Oh my God, everyone loves this costume or this show and these things." It's very liberating.

Was there a particular moment where you realized you could do this for a living?

In a lot of my stuff, I like to keep a small separation. I've done some [videos] of me talking, and I've done a few Q&As but, for the most part, I just really like the videos and the characters to speak for themselves and to keep my personal life private. But once I got to 50K, I thanked everyone for getting behind these videos and supporting me so much. I talked about coming out and how much the videos meant to me even though they're just a minute on Instagram.

People kind of shit on social media, because it can be a terrible place, but it can also be this amazing place where people who don't have access to an agent or castings right away can test out characters and get the roles they want and aren't getting booked for. So I did that and I got the nicest messages from people. Some people were saying that it made them want to come out and that was a huge moment for me — to be more honest in my work about my personal life and my life as a gay man. A gay creator. That was special.

"That's all I want — I just want people to be happy watching the videos, because life is hard."

Aw, that's amazing. That said, how would you describe your brand of comedy?

It is so based in pop culture. I love pop culture. I always have. I think I just love observing, and I try to point out the absurdities of what it's like to live in this age of the internet and how we communicate. Like, how we talk about things and how we engage with each other. I find that really fascinating — these almost Sim characters we've created and project onto the internet as who we are. I love that and I love poking at that, and I always love ripping into myself. That's most of my live show, because I'm a mess.

I mean, who isn't though.

Exactly, we're all messes, but we keep pretending that everything's so perfect on Instagram, and I'm like, "Nah, it's not."

How much overlap would you say there is between @bennydrama7 and Benito Skinner?

[@bennydrama7] is definitely the energetic version of myself. The other version of myself is like, going to bed and watching Drag Race... It's funny, some people ask my friends and family what it's like being around me all the time, and I think sometimes I do crazy voices and put on costumes and wigs, but other times I really love getting Starbucks and going to movies and watching Drag Race in bed. I'm a simple man at the end of the day. @bennydrama7 feels like when I get more creative and energized, and that's what the show is like — me at my most heightened creativity and energy. That's why it's so fun, but I can't do it every night.

Speaking of your other videos, I've been a longtime fan of the astrology dating ones. Can you tell me a little bit about those?

Yeah, those have been terrifying in a way! People are very intense about it, I must say. I almost get bullied into them a little bit, and people are really, really into them. It's kind of been a fun study of people and the internet. I had only really loved my own sign, like everyone else, so it was just going to be the Scorpio video. Then, it was like, "Oh, it could be kind of fun to see if my characters can fit into all these roles and play with that." It was kind of a fun, new challenge and now it's like I can't go a day without someone being like, "When's dating a Cancer coming?"

Literally, my Cancer roommate is sitting next to me right now like, "Yeah, when's the Cancer video coming?"

It's coming, I promise! And it's probably going to be the best one, because I love Cancers so much. But yeah, it's been a little terrifying, because everyone gets so intense.

Has anyone given you shit for any of the videos? Was someone like ,"Oh my God, that's not Scorpio."

No one did that for Scorpio, which I'm glad, because I would've been like, "Bitch, don't lie to me." Some people get mad. I did Paris Hilton for Aquarius and that was more of a pushback than I usually get. People are really sweet to me on the internet — I have a really kind, accepting, fun following — but there was pushback on that, because I think a lot of people weren't really watching for the small things I tried to include. They just thought it was Paris Hilton and they were like, "I'm not like Paris Hilton." So that was a tricky one. But Aries and Pisces went well. They're fun, they're just stressful.

Ahhh, I'm stressed for you. But I guess that's what happens when you're living the dream.

Yeah, I can't believe it! [That occurred to me] kind of last night. The crowd was insane, and I was like social media, yes, totally understand why it can be terrible, but it can also be the fucking best. There aren't a ton of opportunities for queer artists and as they're making more that's great, but it has really allowed me and a lot of other queer people — or people who aren't [industry] standard or what we've deemed "normal" — an opportunity to make a living and perform for people and give them something different. That's what I love hearing after the show — when people are like, "This is so different." It's not like stand up, it's not a variety show. It's just different.

Aw, love that. So I guess the only question left now is, what's next for you?

I'll probably do my show in a few other places. We're still figuring it out, but my first love is doing sketch comedy, so I have a lot of new videos on the way. And some fun, future opportunities with taking the videos to higher platform or maybe TV, and I'm kind of writing shows. I think what was a great about the tour was I got to see real faces and see how they react to videos and characters I bring up. And I have a newfound love of making sketch comedy, because I had kind of been locked in Starbucks editing for a year-and-a-half, so this was a great way to get a break and challenge myself to make something that was longer than three minutes and create a whole live show with these characters. I'm really excited to see what they can do on [something like TV] — just giving them a bigger platform, because I want more people to see them and enjoy it. That's all I want — I just want people to be happy watching the videos, because life is hard.