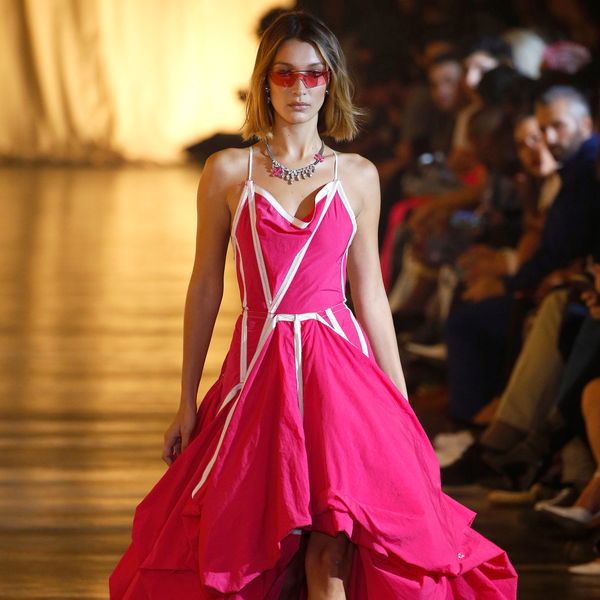 On Thursday at Paris Fashion Week, Off-White presented a starry collection in the parking lot at the Centre Pompidou. Titled "Meteor Shower," the show featured space-age clothing and beauty inspired by constellations — four models, including Gigi Hadid, wore sprays of sequin stars across their noses. And Bella Hadid, who frequently works with designer Virgil Abloh, took to the runway in a long, sporty pink mullet gown with a bubble hem, a sparkling pink and white diamond necklace, and pink athletic sunglasses. The look was extremely Sharpay Evans.

While Abloh might bristle at the comparison, Hadid really did look like Ashley Tisdale in High School Musical (the Y2k revival marches on). Sharpay loved a blindingly bright, Barbie, Devon Aoki in 2 Fast 2 Furious-style pink. She had pink sunglasses. She loved sparkle. Bubble skirts were on the way out by the time of HSM's initial 2006 release, but it seems likely that Sharpay would have rocked a glittery version during the early Gemma Ward years.

Backstage, Hadid was photographed with her hair pinned up in little space buns with the ends sticking out, á la Lizzie McGuire and Miranda Sanchez. Disney is slightly terrifying, but it did give us the gifts of stunning 2-D animation, Zendaya, and current fashion inspiration. Sharpay definitely would have pushed Gabriella down the stairs or something on her way to get that outfit.

Along with the Spring 2020 ready-to-wear collection, Off-White also debuted a new accessory: a purse that literally can't hold anything. Dubbed "The Meteor," Abloh's (who is currently taking a medically mandated break from fashion) latest creation comes with two enormous holes punched in it. You can carry the bag around for clout, but if you tried putting anything inside, it would instantly fall out. According to a press release, the bag is intentionally "unfunctional," and that it is "challenging the concept of a bag itself, one of the most common objects in our everyday lives." The bag, which, again, you cannot actually use, retails for $1,665.