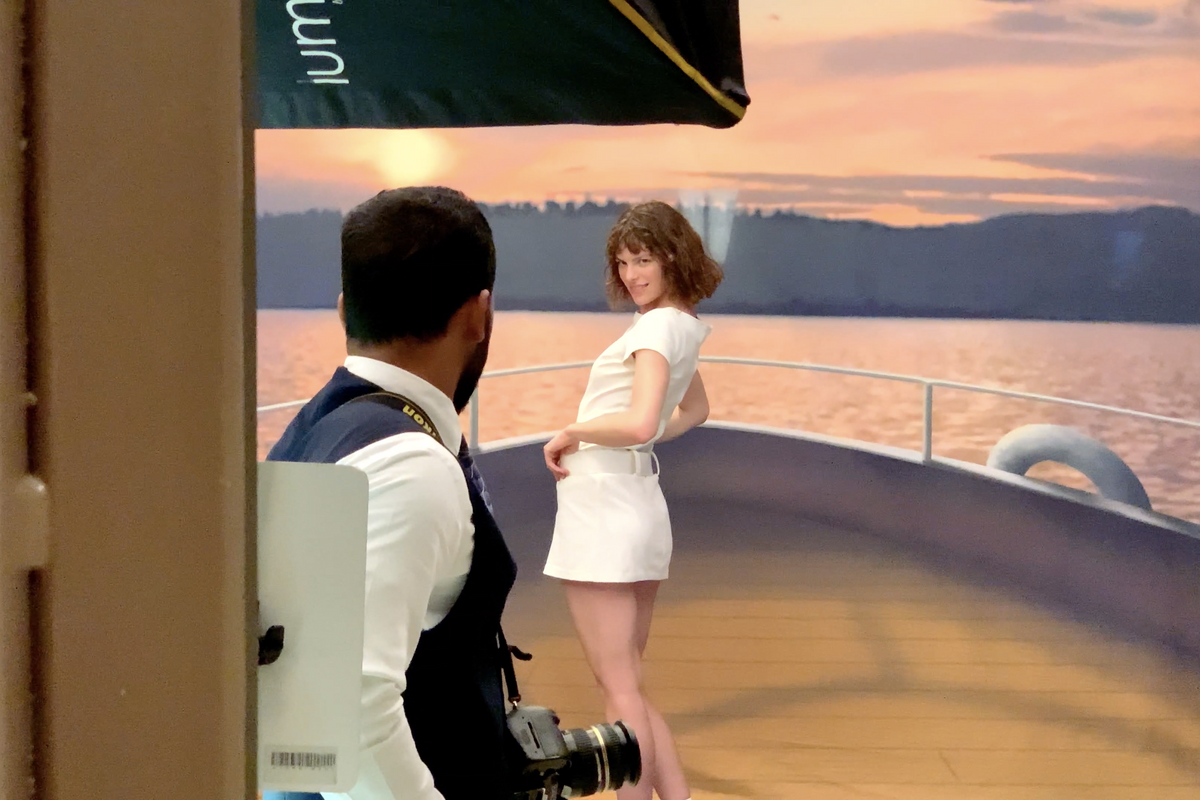 BEA1991 Manufactures Paradise in 'My Own Heaven'

The concept of a "vacation" is actually quite strange. Leaving your everyday life behind to visit a foreign locale, relax, and cut loose in a way you might not do under normal circumstances is perhaps more telling about the strains of capitalism than some innate desire for escape. Entire industries have been built around this culture of vacationing, aimed at constructing a 360 fantasy for the tourist to temporarily inhabit. It's an artificial world designed to live just outside our own reality — a waking dream to temporarily lose yourself in.

This notion served as a point of departure for the documentary art film, My Own Heaven, created by musical polymath BEA1991 and filmmaker Jona Honer. Setting sail from Miami on one of the world's largest cruise ships, the clip follows a semi-detached BEA as she goes through the voyage's pre-planned activities, attempting to embrace the artifice of the cruise despite visible reservations.

"The visual is an active attempt and social experiment that I put myself in," BEA says of the film. "To try and experience happiness in a place where I had a feeling that I probably wouldn't. I wanted to experience a happiness that wasn't built for me."

Soundtracked by BEA1991's single of the same name, there's certain despondency to her performance that's heightened through shoegaze-y guitar melodies. This palpable distance between BEA and her character is what makes My Own Heaven so intriguing.

"Being a documentary filmmaker, I drafted a concept where BEA could be a hybrid character," Honer says. "Meaning that she is aware of the concept but still has to interact with a real environment. I didn't know BEA very well, so I went to look at her Instagram. I was intrigued by this post where she is screaming in all directions from a large pier. The question, 'What is she yelling at?' eventually led us to a cruise ship and the song 'My Own Heaven' augmented the ambivalence that we wanted to express in this concept."

In an effort to better understand concepts that informed My Own Heaven, PAPER asked BEA1991 to describe her own idea of paradise. What we got was a multimedia meditation on the concept:

The Essentials of "Paradise:"

"Paradise" as a Bird:

"Paradise" as a Song:

On the Root of "Paradise:"

In many ways I think we live in a paradise already. Just look at how water moves, but it's overruled by human worries and constraints and digital content and cement. But people are tired of being reminded of the beauty of nature. What is "paradise," anyway? Maybe the term has been milked and has lost its strength? Romanticism and idealism is taking an alternate route; I think it's going to implode and re-establish itself according to the norms we live by today. The current (but fading) approach to paradisal experiences is a cruise ship, a bounty holiday, a cocktail with a libido — something that you pay for. It's not something that "happens to you in a moment of clarity and full appreciation."

I'm not so sure people even want paradise anymore. We want drama and emotions and emphasis on anything that can make us feel alive, rather than a smothering hand that feeds us sugar and keeps our mouths shut. It might be a long way away, but I think a big part of us will evolve into that direction. Maybe I think that the longing and idealism of paradise lies in the past, and that what the western world wants now is everything that is real. I think we're going to get it, too. The concept of paradise will change according to what we [the West] are going through in the present moment. Right now, we're spoiled, confused consumers looking for answers in every way possible.

It scares me. To adhere, gives me the feeling I should be living in extremes — either earning money and working hard, or spending money and chilling hard. The best realizations or concepts have come to me during a holiday or trip of some kind and I've always wanted to get right to it in the moment. I guess the force of transplanting your physical self can have a lot of impact on the works of the mind.

Then, does a vacation have the potential to be the starter of more work?

It surprises me people are able to really play out this proposed concept of a vacation in real life. I've spent time watching them in the past, people spending out the perfect holiday. It's like watching people wander around in a supermarket. What is it that they needed? Is it the food they are even looking for? Or is it an emotional realization they're looking for in between the pickles and the mayonnaise?

I think I've decided I don't like the word "vacation." The culture of it, the general cultivation and economics of it — almost an invitation to use the phenomenon as a concept for something else. (e.g. how could you get the entire planet population to spend two weeks throwing money at something completely different, in exchange for mental expansions and physical health?) Could be a fun art project.