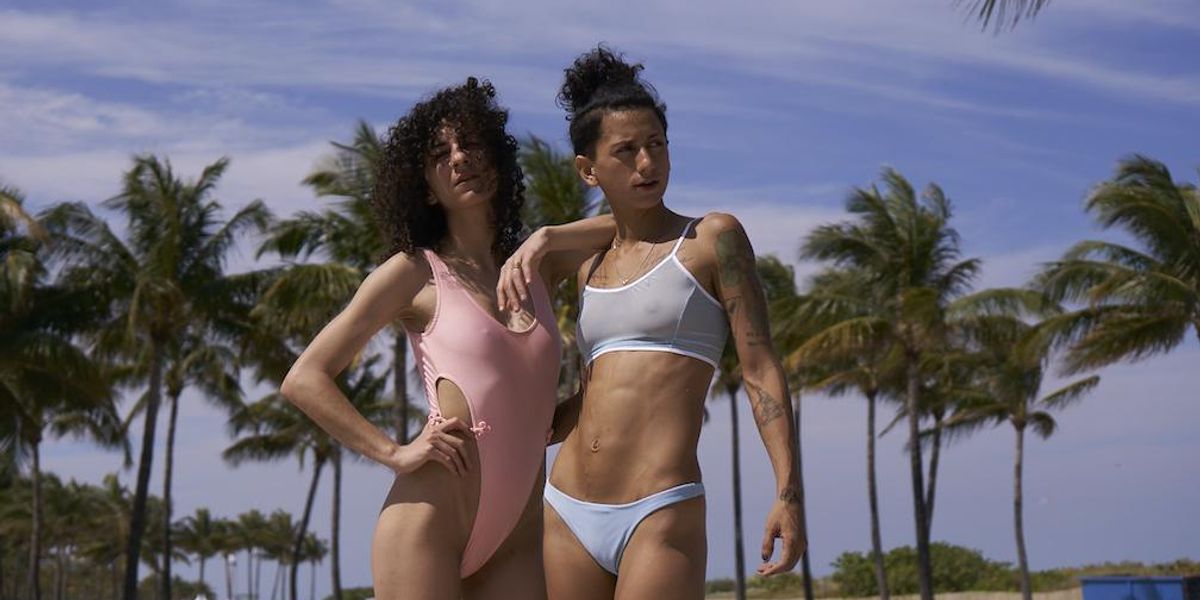 As the story goes, after first seeing Basside perform at iii Point Festival in 2016, the late producer SOPHIE invited the Miami duo back to LA for a series of recording sessions where they would end up collaborating on six tracks. Then the tracks laid dormant for a few years, cropping up in both artists' shows and DJ sets with live rips circulating around fan forums like the countless other unreleased SOPHIE songs that would seemingly never see the light of day.

Unsure if they had the go-ahead to put out the work, Basside and SOPHIE finally reconnected in 2019 while the producer was in town for a gig, who quickly cleared up any lingering doubt or ambiguity. "Oh, I made those for you," SOPHIE reportedly said. "You could have released them the next day, and I wouldn't have cared."

The duo was already in the midst of working to release the EP, when the news of SOPHIE's untimely passing hit this past January. Realizing there really was no point in further prolonging the process, Basside decided there was no time like the present to put out their long-awaited project. "The tragic passing of SOPHIE has made us realize that time is precious, and waiting for a hypothetical future we know nothing about is the wrong way to live," they wrote in statement. "All we have is the present."

Basside's Fuck It Up EP was worth the wait, arriving today via Brooklyn's Sorry Records. Childhood BFFs and legends of the local Miami bass scene, the duo — comprised of Que Linda and Caro Loka — arrive in peak form on the EP, trading deliciously filthy verses and choruses as rallying cries designed to stir any party into a frothing bacchanal. Recorded shortly after Charli XCX's pivotal Vroom Vroom EP, SOPHIE's production on Fuck It Up offers a glimpse into the post-PRODUCT and pre-Oil of Every Pearl's Un-Insides period — ranging from the title track's speaker-rattling trap to the sugary pop vibes of "GIRL" and the fast-paced all-asses-on-the-dancefloor-now barn burner, "CRAZY EXPENSIVE."

To celebrate the release of Fuck It Up, which is out now via Bandcamp with all proceeds going to the Sylvia Rivera Law Project, PAPER asked Basside's Que Linda and Caro Loka to break down each track on the SOPHIE-produced EP.

Que Linda: For the last 10 years Carolina and I have lived in different states, so Basside was always our way of staying connected and getting to see each other as often as we could. "New York to Miami/ No bras, no panties" was always our chant when we would be together. We'd have so much fun chanting it at our shows to get the crowd riled up, but also when it was just us riding our bikes around town and singing it to each other. We love catchy hooks and before this was ever a song we knew we could get it stuck in people's heads.

Caro Loka: With my BFF Linda living in NYC and me stuck in the tropical heat of Miami, "New York to Miami/ No bras, no panties" came to us in a daydream. From traveling back and forth between the two cities, we realized the one common denominator these cities held for us was the lack of clothes during those brutal, but oh so missed summer party nights. Everyone knows when you come to a Basside show, you can leave bras, panties, morals and lovers at home. Also, def your parents. I remember asking my dad if he liked the hook better as "no panties, no bras" or "no bras, no panties." Well, you know how it ended up.

Que Linda: "ME & MY BOO (BEST FRIEND 2)," to me, is just a classic love song that emphasizes our partners being our best friends, while simultaneously highlighting the fact that we're best friends. Caro and I have been best friends since we were 14 years old. We love each other unconditionally and see each other as family, you know?

Caro Loka: The song really says it all for the most part. We based it off this line, "All I need in this life of sin is me and my best friend," from a Jay-Z "'03 Bonnie & Clyde" parody we wrote back in the early 2000s. The hardest thing about being in a sexy duo band with your best friend and womb mate is... the partners. Our lovers at the time of the recording didn't seem to get or really understand the deep "we give no fucks" connection and magical love we share with each other on and off the stage. With that said, this song is a ballad to all those out there that can relate — all those that are blessed enough to have a best friend boo.

Caro Loka: Back in 2014, I went to a 2 Chainz and MadeinTYO show and, as you know, I can't contain myself when it's that time to move and dance. To my surprise though, I was the only person feeling it The rest of the audience was just taking [Snapchat] videos and stuff. So in that fun moving moment, I bumped into one of the Snapchatters and they angrily replied, "Yo you're gonna fuck up my Snaps!" I just replied with, "I sure will." Later when I got to share my day with Linda, we were passing the blunt and this just developed.

Que Linda: My inspiration for this song came when I was leaving a former lover's house. We had a casual "you up?" type situation for about four years — never went on a date, never had a sleepover, not getting to know him. I just let him remain a fantasy in my mind and he was whoever I wanted him to be, so I never had to find out I was wrong and be disappointed. He was so hot and the sex was so good, it never got old. I wrote my verse on the notes app on my phone one night around 4 AM while leaving his apartment in Soho. It perfectly summed up our relationship. I hope he hears it one day.

Caro Loka: We actually came up with this song in LA on the way to SOPHIE's house. We had a random beat playing in the car and we just started going at it. On my verse, "GIRL" is about all my past honeys and all the funny things that happen when... you know it ain't easy being this cute, but it also ain't cute to be this easy.

Que Linda: We were stuck in LA traffic practicing our freestylin, which we are both pretty bad at. Somewhere in there we came up with that hook, but it originally had a different melody. We sang it over and over again, and recorded it on our phone so we wouldn't forget it. When we brought it to SOPHIE, she immediately changed the melody and we were so impressed that she could do something so minimal yet so powerful that quickly. She heard the words and knew exactly how it was supposed to sound. The song is an appreciation of women, all women, cause we undeniably love women in every sense.

Caro Loka: Tinder-inspired. Nothing more to be said.

Que Linda: "Swipe" is really just about our experience with Tinder and hookup culture in general. It's really easy to be single in New York. Everyone is hot and available, which makes it easy to be picky and shallow. Finding someone to hookup with on Tinder is almost as easy as ordering a pizza.

Que Linda: Although I personally don't care about money, it's fun to pretend. I love fantasizing about being spoiled even though I pride myself on my independence. I feel like this song is just a metaphor for my confidence and what I believe I deserve.

Caro Loka: My gf at the time Morgan was really into Spanish. I'm Colombian and she pointed out that if you translate my name Caro Lokah in English, it means crazy expensive. All of it is legit and we do think we are the shit! Enjoy.