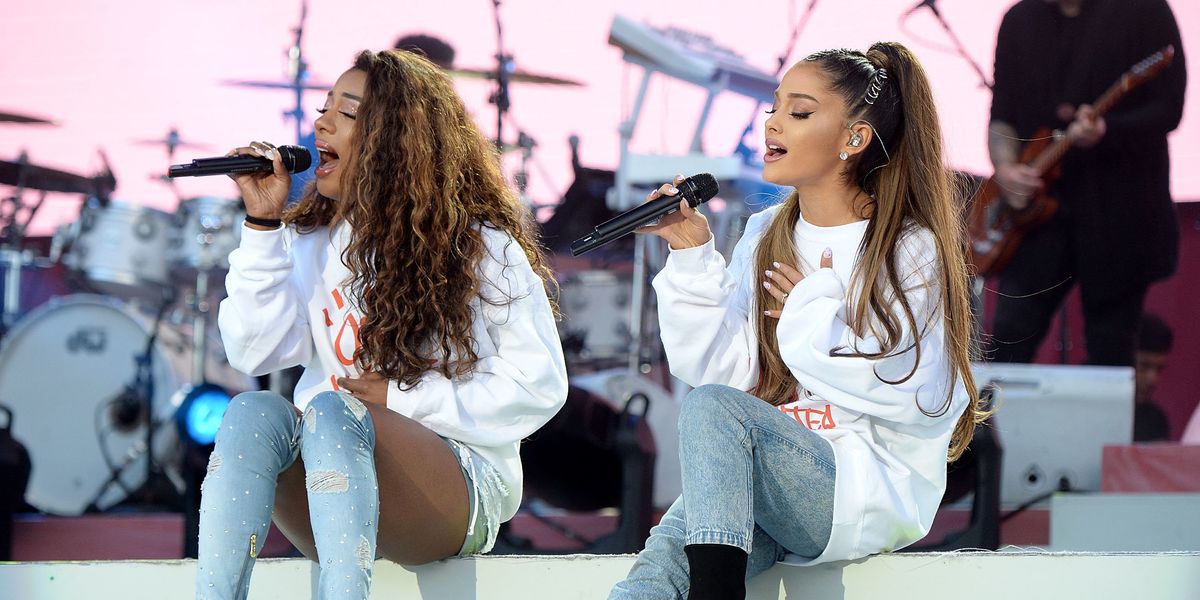 Ariana Grande released her second album in six months in February. One month later, because she has absolutely no chill, Ari's already dropping singles. She was recently featured on Two Chainz' "Rule The World." Today, she and her "7 Rings" co-writer — as well as one of her lucky ringed best friends — Victoria Monet announced a new single called "Monopoly, and then proceeded to argue about when they should drop it on Twitter.

People guessed what was up when Ari and Victoria started trading Tweets that sounded a lot like lyrics.

"Work so muuuuuch, need a tinny twin twin/ You'd be straight for life if I gave you my pin/ Even though we gave up that 90% for the win" their tweets spelled out. The last phrase seems to reference that the pair were forced to give away 90% of their "7 Rings" royalties to Broadway songwriters Rodgers and Hammerstein, whose Sound of Music classic "My Favorite Things" is sampled on the track. In true form, Ari's clearly laughing it off (she doesn't exactly need the cash), and it sounds like the song will include plenty of bag-securing flexes and best friend tributes.

Related | Womxn are Writing Today's Biggest Hits. Meet 15 Of Them.

The quick turnaround following Thank U, Next is on-brand for Ari. She's spoken repeatedly about wanting to escape the pomp and circumstance, and lengthy periods between creation and release that come with formal roll-outs. However, she apparently hates the wait so bad that Victoria had to talk her out of dropping their new song before it was even finished.

Ariana was all for going live tomorrow to celebrate "7 Rings" chart streak.

man, let’s drop it tomorrow night @VictoriaMonet 🖤 seven rings is ab to be number one for eight weeks and the album… https://t.co/TLItochqnV
— Ariana Grande (@Ariana Grande)1553739287.0

Which made Ari rethink.

So it's settled. We're getting the track, which Victoria revealed is named "Monopoly," on Monday. We're puzzled but looking forward to some kind of extended boardgame metaphor.

While the two artists were going back and forth, a fan commented to praise Ari for how she is "saying fuck the rules and deciding to release music whenever he fuck she wants." Ariana responded wholeheartedly, agreeing.

Stay tuned for "Monopoly" on Monday, but it sounds like it won't be the only one-off track we'll hear from the pop star in the coming months.