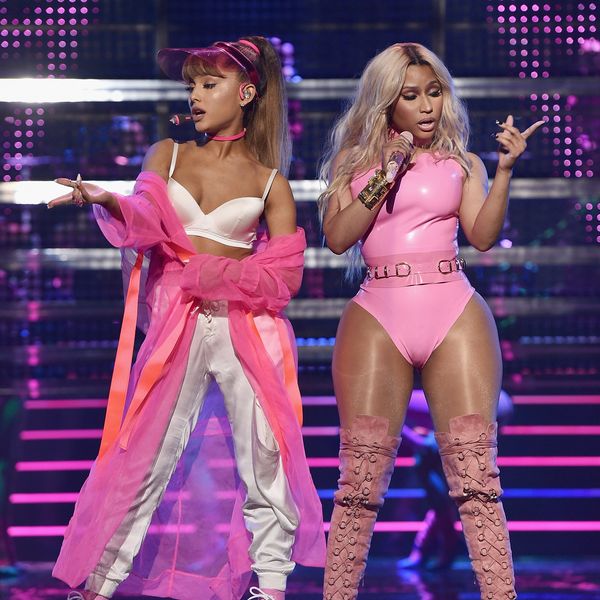 Nicki Minaj's much-anticipated album has been pushed back several times after initially promising a June 15 release. Now, we've received a new date for Queen's arrival, but there's only one problem: it's the same day that Ariana Grande's album is slated to drop.

Related | This Is Why Nicki Minaj Delayed Her New Album

It didn't take long for fans to realize August 17 was an important date for more reasons than one, and chastise Minaj for moving her album with apparent disregard for Grande's forthcomingSweetener. Given that Grande and Minaj are friends and frequent collaborators, often publicly expressing their love for one another, the stars' followers were unsure how to feel, which eventually prompted both to weigh in on the decision.

In response to a fan addressing the Arianators concluding Grande and Minaj were no longer friends due to the updated release for Queen, Grande set the record straight.

"jesus is this what's going on today?" She wrote on Twitter. "imma jus stop logging in at all lmfao. that's my fucking sister. she's clearing a sample. buy and stream queen & sweetener aug 17 bye. these numbers don't mean as much to the artist as they do to y'all. jus want y'all to listen to the project."

@minajcum jesus is this what’s going on today? imma jus stop logging in at all lmfao. that’s my fucking sister. she… https://t.co/p2uHlTioBi
— Ariana Grande (@Ariana Grande)1533146973.0

While it might have been left at that, others jumped in to claim Grande, in fact, puts much stock in the numbers her work produces, as does Minaj. The singer quickly clapped back, claiming that while she celebrates exciting statistics, that doesn't necessarily mean she strives to achieve them and won't be competing with Minaj.

At this point Minaj decided to also clear the air, reassuring fans that they will be "very happy" with the final products.

"I love this woman," she tweeted about Grande. "Can't wait for the fans to benefit from all the hard work on both ends. We love your passion. You guys will be VERY happy. Trust. That's all I'll say."

One thing is for sure, August 17 will be a hell of a day.