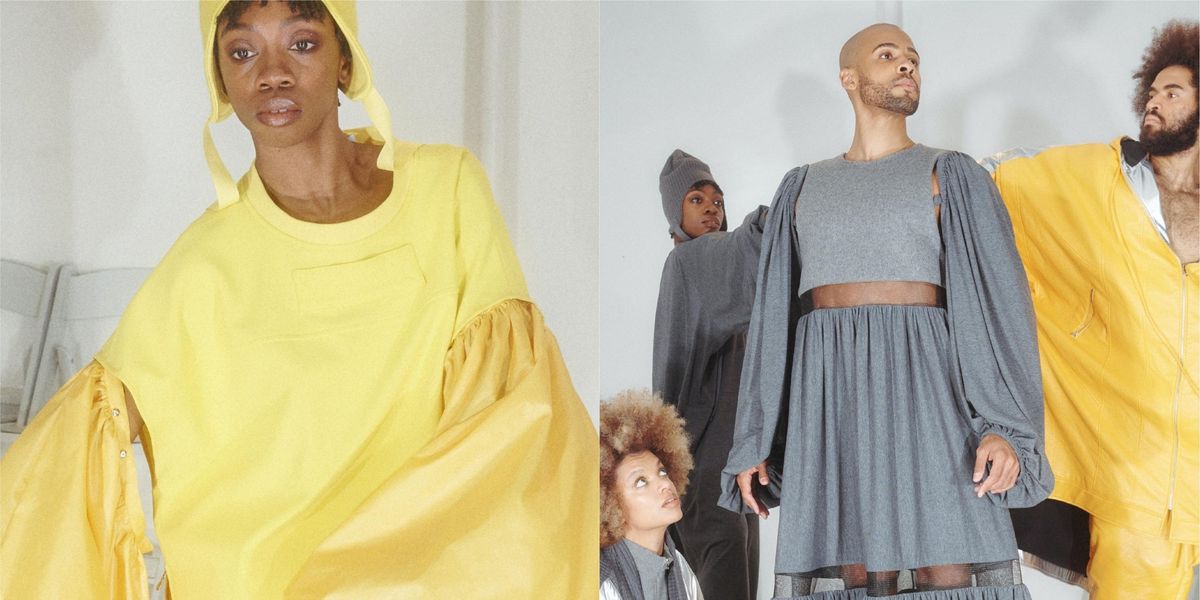 Last September, Brooklyn-based designer Aaron Potts made his debut as part of the Black in Fashion Council's Discovery Showroom, where his genderless A.POTTS label showed alongside other emerging Black-owned brands. Having already shown a few times as part of New York Men's Day, the labels's joyful unisex creations suddenly generated more buzz than ever amidst increasing interest for independent Black businesses.

Related | So Was the First American Collections Calendar Any Good?

The course of his 20-year career began in Detroit where his admiration for Diana Ross and episodes of Style with Elsa Klensch consumed his adolescent wonder. But it wasn't until high school where a fashion illustration course planted the seed for a blossoming career. "I don't know if I heard the voice or just felt the voice, but it was like, this is it," he tells PAPER. "Like I knew from that moment, it was as clear as day and so I just powered through with my love for fashion."

Potts would go on to amass an impressive resume that started during his studies at Parsons School of Design, where he interned with Donna Karan at DKNY. He would go on to design for Emanuel Ungaro, Escada in Germany and at Tamara Mellon (co-founder of Jimmy Choo) where he was the design director. With two decades of experience under his belt, Potts felt it was the right time to step out on his own in 2018.

The work of fashion legends like Yohji Yamamoto and Rei Kawakubo, as well as pioneering American designer Willi Smith, were some of Potts' early influences, particularly when it came to volume and silhouette. But his approach would be unapologetically inclusive and accessible, not unlike Telfar's "it's for everyone" mantra.

"I thought it was almost like a renegade sort of thing of taking this essence of something that's supposed to be exclusive and saying screw you to the establishment," Potts explains. "We're going to make this for everyone."

What initially started out as menswear quickly pivoted to unisex when Potts realized the limiting nature of gender within fashion and identity. The change ultimately solidified the A. Potts sensibility, one that championed limitless expression. "The more I started exploring it, the thing that I figured out was that these social constructions of gender, what they do, they actually hinder people from being their truest selves," he says. "So for me, it's not necessarily about putting boys in girls clothes or girls in men's clothes. It's giving people these pieces that they can just be and express who they are through the clothes."

This Black History Month, one year after his first fashion presentation, Potts showcased his Fall 2021 collection digitally which was inspired by Jody Watley's 1987 music video for her song "Still A Thrill." With it, Potts' resulting meditation on light, shadow, darkness and the associated interpretations of these phenomena, led him to think about dance and movement.

"As I started designing, I really was thinking about how clothes move and how bodies move in the clothes and what does this shape do when your arm goes up, whether you're dancing or waving for a taxi," he says. "I thought about those types of things and how clothes look beautiful from all different angles." Entitled "SHADOWLIGHT," the collection brings to life the juxtaposition of light and dark while epitomizing '80s Soho through the romantic spirit of Jody Watley and modern American dance.

The presentation, which was inspired, informed and assembled by Black creatives, echoes the designer's love for showcasing the African diaspora. "Now I feel like I can truly bring my likes and my inspirations and the things that get my creativity going," he says. "Whether it's Caribbean or American or African, I can actually talk about this stuff and use it as a launching pad and point of differentiation because some people don't value it and I see the beauty in it. It finally feels just right and it's extremely special to me."