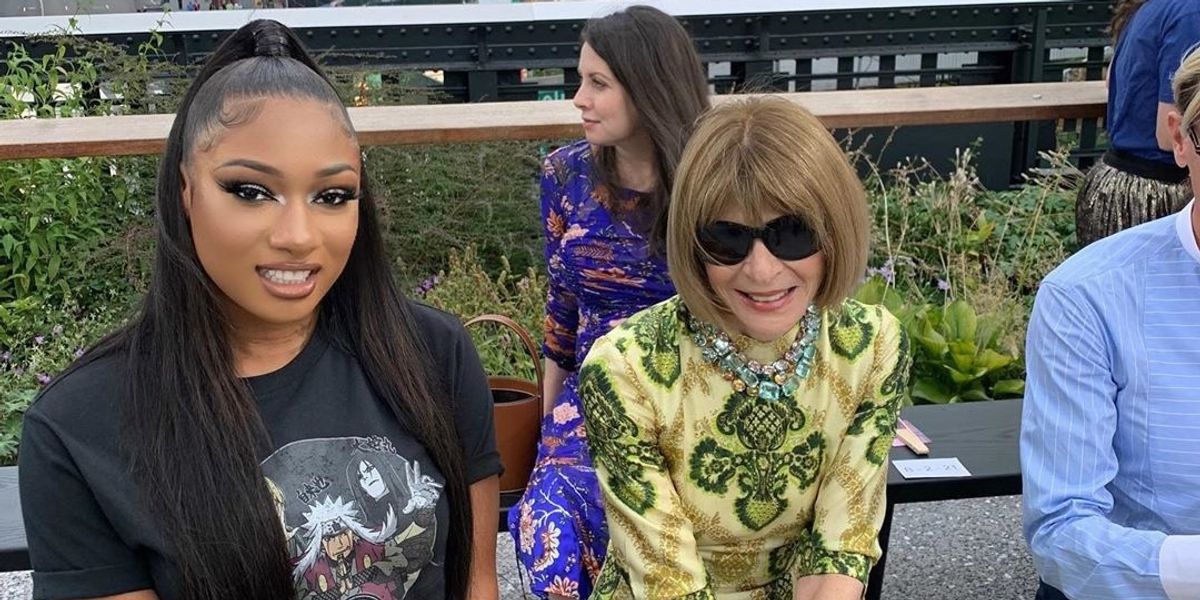 Megan shared the pic on Instagram, dubbing Wintour Hot Girl Anna — following a long lineage of hip-hop artists making literally everything cool. What could Hot Girl Meg and Hot Girl Anna have discussed, inquiring minds wonder? Perhaps Wintour making a cameo in Megan's next video? Maybe Megan asked Wintour to drive the boat? Is this the start of a conversation about a potential Vogue cover? Hard to say, but let's not rule it out.

On the internet, some feel that this meeting was an accident, and invoked the Beyoncé "somebody's getting fired" meme. Rude. Others praised Megan for meeting the fashion leader in little more than a T-shirt — certainly a power move in its own right. Still more want to someday see video of Megan pouring liquor into Wintour's mouth, hence driving the boat. Admittedly, so do we.

The power this image has! But to be clear, this is not the first time Wintour has posed with a rap star on the rise during fashion week. Remember Nicki Minaj's iconic lyric on Pink Friday: Roman Reloaded's "Come On A Cone"? "When I'm sittin' with Anna/I'm really sittin' with Anna/Ain't a metaphor punchline, I'm really sittin' with Anna!" That was a real thing. In fact, Wintour reportedly requested to be sat next to Minaj at Carolina Herrera back in 2011. These lyrics and the dream of sitting with Wintour, by the way, were manifestations of Minaj's. Minaj first called her out in Pink Friday outtake "Muny" by rapping: "Hey, yo, Anna, hey yo Anna Wintour, I'ma need that cover baby girl."

As we know, Minaj recently shared the spotlight with Megan on their "Hot Girl Summer" collab. So, if Megan wants to be further in Wintour's good graces, perhaps she can follow in her forebearer's footsteps and get to writing. Or not! But we love to see it — the start of what we hope is a long and mutually beneficial relationship.