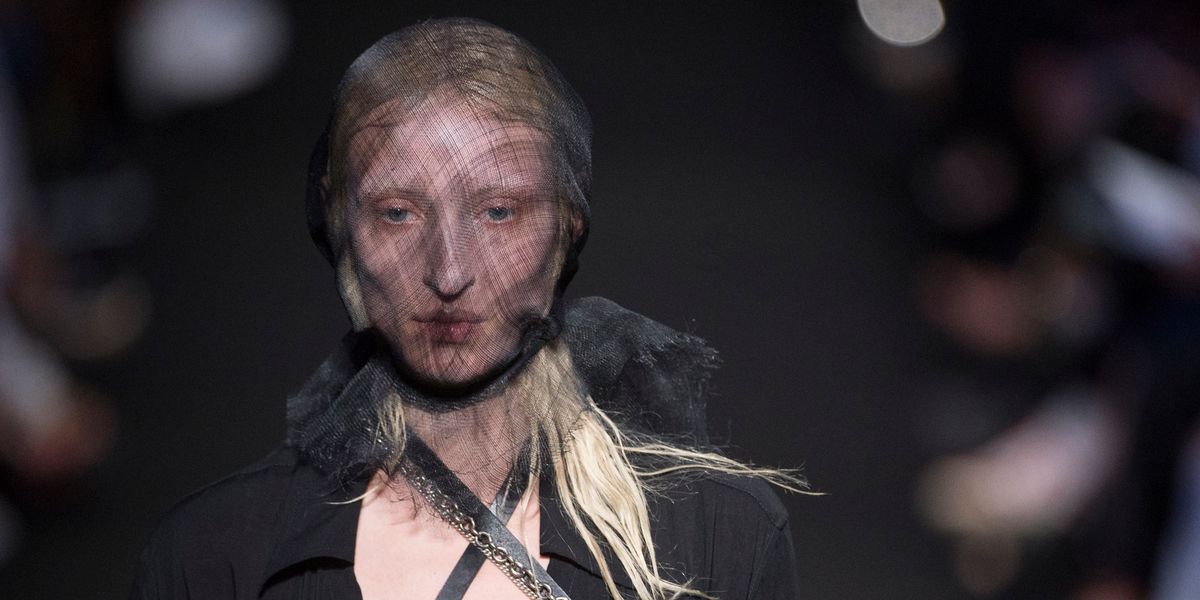 The Unknown Woman of the Seine

Ann Demeulemeester loves death. After last season's embrace of mourning and 19th century fin de siècle drama, it was only logical that designer Sébastien Meunier would turn to a famous death mask for inspiration. For those not well versed in the intricacies of corpse art, a death mask is a wax or plaster cast made of a person's face following their death.

The L'Inconnue de la Seine, or The Unknown Woman of the Seine, ultimately inspired (and gave a title to) Meunier's spring 2019 collection. This unidentified woman's post-mortem face became a fixture in the homes of artists in the 1900s and influenced a number of literary works, the first of which was Richard Le Gallienne's 1900 novella The Worshipper of the Image. In that particularly cheery story, a poet falls in love with the mask, which leads to the death of his daughter and suicide of his wife.

Belgian hat designer Elvis Pompilio's ghostly funeral veils wrapped tight around model's faces gave a haunting and romantic update to the death masks that inspired the show. The millinery maven has been crafting headwear for the likes of Dior and Valentino since 1987, and for Demeulemeester's spring 2019 show, his delicately stitched headpieces lent a perfectly gothic grace to the runway.

Welcome to the Black Parade

Sheer black veils and a stark black runway turned the Chaillot National Theater into a crypt for the Demeulemeester's eerie ode to death. On the runway, the darkness continued with rose appliqués, sheer skirts, boots, and long plunging trenches for a collection that filled our cold dead hearts with joy.

Corpse brides roamed the catwalk for some of the show's most stunning looks. Clad in sheer, all-white ensembles and nearly-faceless thanks to the tight veils that dominated the collection, their ghostly silhouettes were as romantic as they were haunting.

A Streak of Color

Unless you're Lana Del Rey and attending your sugar daddy's funeral, you wouldn't wear a blood red dress to the cemetery, so it's expected that Meunier's dominant color scheme would be variations of black and white. There were plenty of the two tones in all manner of materials, but subtle streaks of color did manage to find their way in to the collection.

A gauzy millennial pink dress dressed up in a long black trench with dead rose adornments opened the show and from there, beige, gold, and a surprising shade of orange on a leather harness brought some life to Demeulemeester's spectral show.