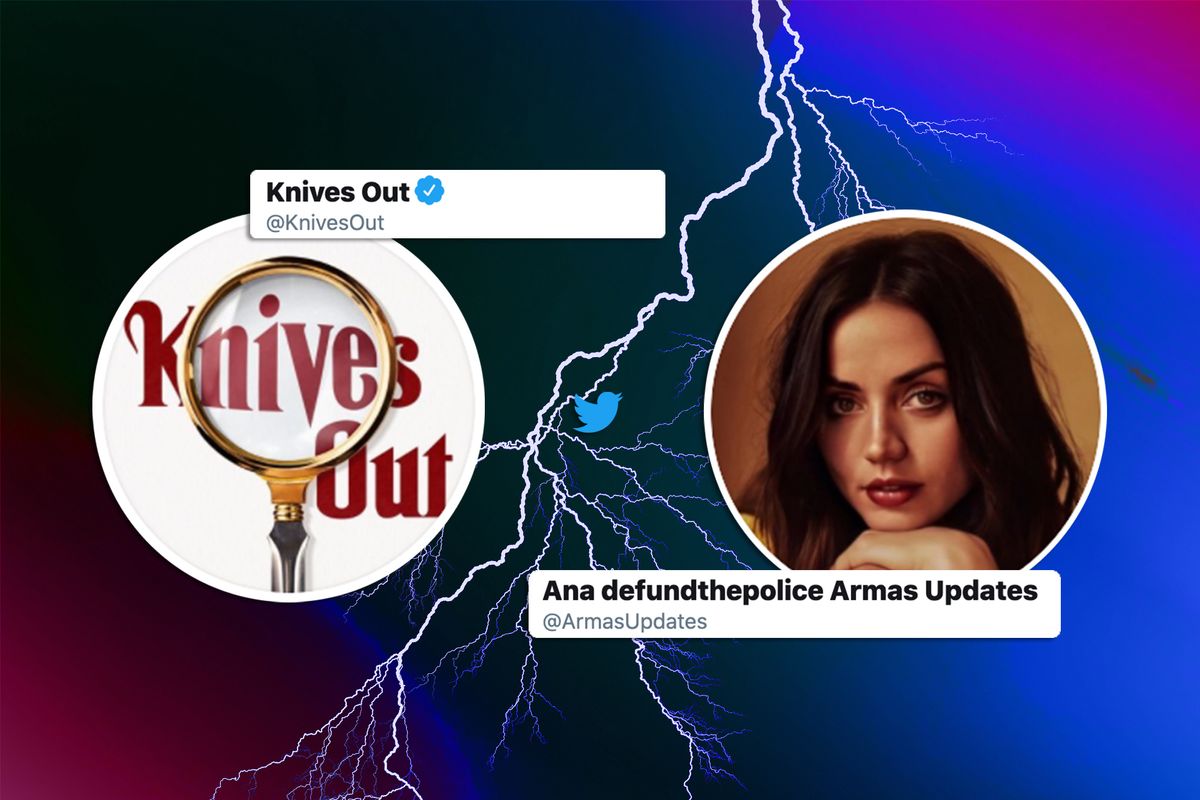 The Truth About @ArmasUpdates and @KnivesOut

We're living in the golden age of fandom, where social media has allowed stans to interact with their idols on a daily basis. Whether you're a barb, lamb, belieber or registered bardi gang member, you're probably @-ing somebody. On Stan Stories, we meet the internet's most dedicated followers and delve deep into their obsessions.

All AJ wanted was to stan Golden Globe-nominated actress Ana de Armas, breakout star of Knives Out and pandemic girlfriend of Ben Affleck, in relative peace. Unfortunately, this has proven too much to ask.

Back in April, the admin of @ArmasUpdates told PAPER that de Armas had blocked his extremely benign Twitter, in apparent disregard or even disdain for his months of posts dedicated to her acting work, down-to-earth lockdown fashion choices and stunning editorial photo shoots. Earlier this week, the 23-year-old Texan revealed that his stan account (which, to be absolutely clear, exists for the sole purpose of praising Ana de Armas in hyperbolic terms and only very occasionally issuing the polite request that she wear a face mask in public) had also been blocked by the verified @KnivesOut page, which is known for sending thirsty Chris Evans tweets.

To make matters worse, the Knives Out account started bragging about it:

Then Knives Out director Rian Johnson weighed in with bemusement:

After a bizarre back-and-forth, as of Tuesday night @KnivesOut has officially unblocked @ArmasUpdates, although the actress herself has remained frustratingly silent and kept AJ on her blacklist. Now, some cynics are wondering whether this was all just a staged attempt to promote the digital release of 2019's favorite whodunnit.

AJ denies this. "I wish we both were in on the joke like a majority of people think we are," he told PAPER over DM a few hours before Knives Out repented and refollowed. "It's all one sided. I don't want beef, but it seems apparent from the other side." He realized that Knives Out had blocked him back in May, reached out to Lionsgate Films in hope of reconciling, but never heard anything back. "So I chose to make it public."

It might not seem like a big deal to the average Twitter lurker, but running a stan account takes a lot of work — so AJ was understandably hurt when Knives Out, one of his favorite films starring his favorite actress, appeared to turn on him in cheap pursuit of a viral moment.

"This response I found to be vile," he said, referring to the account tweeting gleefully about how he could no longer interact with its content. "To basically bite the hand that feeds you clout, and feeds you support and appreciation. Of course, I laugh it off because what can I do if that's how they think? Although, it does not change how their approach seemed unfair."

Curious about the strategy being deployed by @KnivesOut, as well as the conspiracy theories circulating that both accounts were run by the same social media team (or even Ana de Armas herself, perhaps with help from Affleck), PAPER contacted Lionsgate on Wednesday to get the full story. Turns out, @KnivesOut is run by a team of no less than four social media strategists: Eric Dachman, Sebastian Crank, Liam Santamaria and Michael Castillo. They seem very nice, were never in cahoots with AJ and, for the record, have some regrets about how this all went down.

"The Knives Out account had blocked @ArmasUpdates a while ago in solidarity with Ana de Armas," Crank confirmed on a Zoom call. "But when [AJ] called us out a couple of days ago, none of us could actually remember blocking him. We're like, let's roll with it and let's publicly beef with him for a little bit… then the next day we felt a little bad, because the truth is we're big fans of the account and big fans of Ana de Armas." Are not we all?

Ultimately, the team "decided to squash the beef and offer a peace offering" in the form of some exclusive BTS Ana de Armas photos, sourced from Rian Johnson himself.

As Santamaria put it, "@ArmasUpdates is actually our target demo, and someone who we want to make sure we stay friends with." So they're glad to have mended the rift. (@ArmasUpdates also generously plugged the movie on Blu-Ray.)

While I personally would have preferred to break the story that Ana de Armas is a social media mastermind, keeping her name in the headlines during an enforced career lull by masquerading as her own adoring stan, the revelation that a team of four people was deployed to co-opt Gen-Z Twitter dialect and promote the digital release of Knives Out is almost as interesting. Daniel Craig would surely agree.

"I will say that we've worked really hard on these accounts to do something that no movie has done before," said Dachman. "We're proud to do something unique in that space. The four of us who were hired to create this mysterious persona — no one knows who the real stan is, and tonnes of our fans have been asking for a face reveal. But it's not just one person. We are all Knives Out." Indeed.

While this particular niche feud has thankfully ended, questions remain as to why de Armas herself continues to hold her stans in contempt. The Knives Out team say they're stumped, and AJ's only theory is that the actress has taken offense to him lightly calling her out for an apparently weak stance on mask-wearing during her daily paparazzi strolls with Affleck, as well as for posting one of those much-maligned #BLM Instagram squares on Instagram. (It's not particularly unusual for even the most devoted Twitter stans to hold faves accountable around political issues, and de Armas has notably changed her behavior in light of AJ's light criticisms — even attending a Black Lives Matter rally with Affleck in Los Angeles.)

What seems most likely is that de Armas has no idea how Twitter works. And honestly? God bless. Wish I were her. AJ says @ArmasUpdates will continue with or without her blessing, and that "the absolute fandom intentions will remain the same."

There's no longer bad blood between him and the Knives Out team, either. "I am glad to have had an amicable reconciliation with the Knives Out account," he told us after receiving his apology and re-follow. "Hopefully Ana is next!"