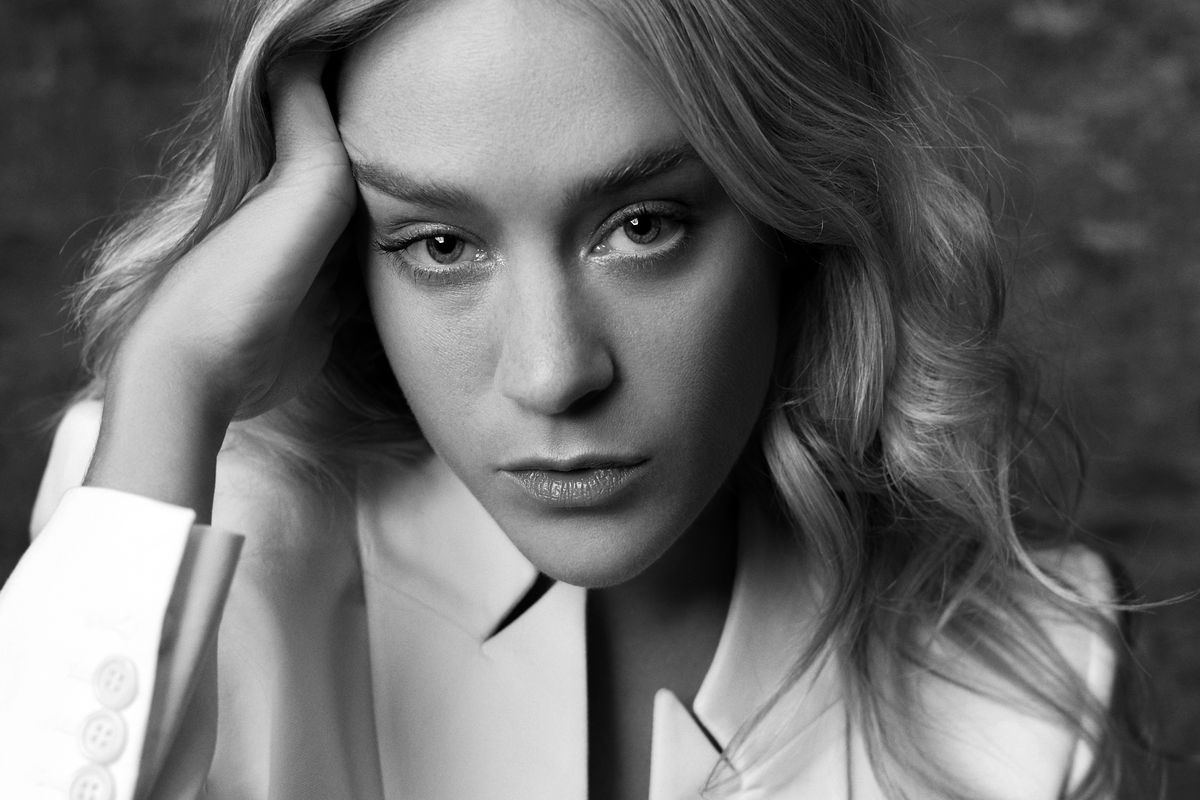 An Afternoon Off with Chloë Sevigny: The OG 'It'-Girl Who's Ready to Leave the "Kids" Table

Chloë is not happy to see me. "You're early," she says, as I approach her table at an East Village diner on a steamy Friday afternoon. Chloë Sevigny, indie cinema queen and fashion icon, is hungry. She had hoped to quickly refuel – alone – before beginning our interview. Unfortunately I arrived 15 minutes ahead of schedule and now we are both forced to confront a shared nightmare: eating in front of a stranger.

Except Chloë Sevigny is a stranger to no one. She has claimed, been, had, "it" ever since when she began working as an actress and model in the early 90s. At age 19, The New Yorker declared Sevigny the "coolest girl in the world" and the "coolest girl in the world" is how she's remained. Sevigny is now in her early forties, but you'd never know it. In fact the title alone seems to have rendered her ageless (after all, no one's ever heard of an "it" woman). I wondered if that's why she was so determined to dine alone...so that the Chloë Sevigny I knew, cool, seemingly insusceptible to human needs, would be the Chloë Sevigny I met. Might she have ordered a more pronounceable salad if I wasn't there? Did I ruin her chance to let her guard down?

Probably not – Chloë Sevigny is unwaveringly authentic in her coolness. No one could rise as high as she has if they weren't really the person they're projecting. Perhaps unwittingly, every aspect of Sevigny's life is envy-inducing for the Tumblr gen. She has modeled for Miu Miu, Louis Vuitton, Chloé. She was working as an intern for iconic alt-teen magazine Sassy when most kids begin college. She met Harmony Korine in Washington Square Park while hanging out with skaters, who later Sevigny cast her as a lead in his cult-classic Kids. Her resumé would overwhelm any first date, not that she partakes in the dating scene anymore – her long-term boyfriend is Kanye West consultant and Supreme co-designer Ricky Saiz. She's "too shy" to dance, but when she does, like last night, it's only when her jam comes on (The Grateful Dead, of course). She drinks martinis.

While all these factors propelled her to icon status, Chloë can recall several times when being considered "it" was detrimental to her film career.

Of course, this criticism is prior to the prevalence of social media, which, like almost every other industry, has come to inform Hollywood more than anyone might have predicted. The irony, I explain, is that actors are now often required to already be a "personality," validated by thousands online of course, to be considered for bigger roles.

"You're lying!" Sevigny, who has over half a million followers to her name, squeals. "But can't you, like, buy them? How much do they cost?"

Of course, Sevigny doesn't have to concern herself with online popularity to impress producers. Chloë Sevigny carries enough clout on her own. Chloë Sevigny arrived a long time ago. When I remind her of this, Sevigny disagrees wholeheartedly. Even though she admits she's more sought after now than ever, Sevigny is steadfastly determined she has yet to really crack the industry – but if a woman who has acted with everyone from Samuel L. Jackson to Hilary Swank hasn't made it, who has?

This perpetual hunger, I learn, is a fundamental part of what makes Sevigny who she is. The steadfast resolution that she is yet to make her mark, drives her forward – rare in an actor so established. What feels incongruous is the fact that sure, her performance in films like Whit Stillman's The Last Days of Disco and Kimberly Pierce's Boys Don't Cry thrust her into the spotlight, but her breakout casting in Kids was so organic you could easily be fooled into thinking she was never that fazed with the business to begin with.

"I got a lucky break [with Kids], but I'd always wanted to be an actress. Then I did a film directed by Steve Buscemi with all these New York character actors, and I feel like that was really the beginning of my career – more so than Kids. With Kids, all of us were unknown together, then with this film I was playing along with who, in my mind, were the greats."

Two decades on, Sevigny is still constantly tapped for films with stellar casts. In the last two months alone, Chloë has had two films released that feature an unbelievable line-up of actors: The Dinner with Richard Gere and Laura Linney and the Miguel Arteta-directed Beatriz at Dinner, which stars Salma Hayek. Still, though, Chloe remains insatiable.

"I've mostly played in ensemble films," she explains. "I don't have that same experience that other actresses have, doing big studio films. It's not like I'm a movie star, I'm not on the level of those other girls…I just don't feel like I'm there, like I'm at the table.

"There's a list of people who are the offered the biggest movies, and I'm not on that list."

She might not being inundated with offers to star in the next superhero franchise, but Chloë Sevigny is synonymous with quality independent filmmaking. Among the actors she admires most are Seth Rogen ("he's so talented, so smart") and Lena Dunham ("I'd love to be friends with her"), both of whom paved their own path in entertainment, much like Sevigny. Many would even consider Chloe Sevigny the indie cinema queen, I tell her.

"I don't know what that means anymore," she says, waving dismissively. "Maybe in the 90s."

Chloë feels very protective over her friends that are considered "on the list," however. She has witnessed firsthand via her close relationship with Kristen Stewart the unending madness that comes with living as an A-lister, something she describes as "another level of fame." While you might not think Sevigny would be the type willing to sacrifice her privacy and perhaps her control to be in that realm, she assures me she would. Yes, Sevigny says, if giving up day-to-day freedom meant she could make great films, then yes, absolutely.

"It's a double-edged sword if you already are in the public eye...it's like what do you keep for yourself. I don't do a lot of on camera, because I feel like you're losing something. I understand why big movie stars are so good at doing that, but I'm really bad at it, I feel really exposed and vulnerable. I'm a lot more chatty in this kind of form."

Sevigny pauses and looks at me quizzically. "You're really getting through those pancakes," she says, with a wry smile.

She's right. The actress is clearly so cautious of overzealous journalists looking for the Sevigny scoop, that I'm highly conscious of saying something she might consider too searching. Consequently I'm stuffing my mouth with so much fluffy sponge that there's no room for my feet.

The conversation turns to Internet call-out culture, particularly how the movement took Hollywood hostage and demanded diversity. I asked her whether the industry's embrace of alternative narratives is merely a response to growing trend or here to say. Sevigny is shocked change has taken this long ("there's been a shift in power"), but she's also conscious I'm looking for an answer that Twitter might decide doesn't fit the 2017 standards of "woke." I was right, she is wary.

"The clickbait thing is a little scary, journalists want to exploit you more for that one bit. You know? They'll spin it into something – that wasn't necessarily what the Internet was supposed to be about."

Maybe not, but the Internet sure does love Chloë Sevigny. Searching her name pulls up numerous fan pages, chock-full of 90s nostalgia and paparazzi shots of the actress. You can dive deep into a Chloë K-hole that likely covers more ground than the photographs found in Sevigny's Rizzoli-published coffee table book Chloë Sevigny. Almost every outfit the actress ever stepped out in is documented right here, carefully filtered and framed to be forever remembered. I wonder if she is ready to retire from her "it girl" status, if she finds it reductive in the face of her great creative work.

"I feel more annoyed by the fact I'm asked about it, than the the fact it's applied to me. There's always another actress that people will be drawn to. I mean I really liked Clara Bow, she was an "it" girl. Then there's the Kylie Jenner "it" girl too. It's been applied to so many girls that it doesn't feel narrow to me."

She's not wrong, but Kylie, along with much of the younger generation, record much of their lives for their online audience. There's very little mystery about these stars anymore – "it" is all out on display. The fascination that has, and I think always will, surround Chloe Sevigny stems from not only her nonchalance, but an irrefutable 'realness' that doesn't need to be proved via Snapchat video.

Chloë Sevigny could take or leave this whole damn game, but she chooses to be a part of it, because actor, director, designer, model Chloë Sevigny wants to be one of the greats. She's stays hungry – and that's what makes her the ultimate, maybe even the last "it" girl.