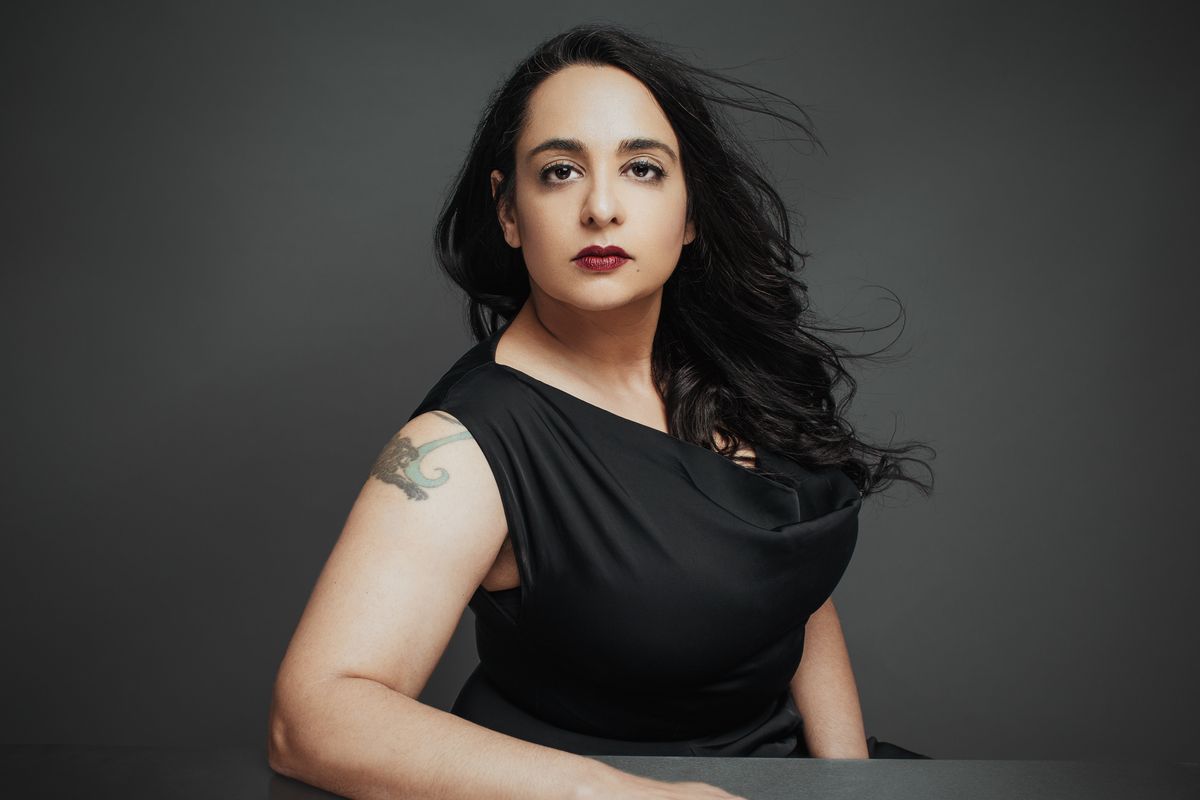 Fat and All That: Meet Amina Akhtar

Growing up as a fat kid, there were really never any positive plus-sized role models on TV or in movies. The fat person was always the comic relief and we were usually laughing at him, not with him. Things were even more bleak for big women who seemed good for little more than sight gags, breaking furniture when they sat down or gobbling pies and cakes like pigs.

Luckily these days things have changed a bit and recently we've had two inspiring non-size-zero heroines to root for and relate to. Dietland is a novel by Serai Walker about Plum Kettle, a 300-pound woman who works at a fashion magazine and ends up being involved with a group of feminist terrorists. The book is both a heartbreaking depiction of the reality of being fat in the fashion world and an over-the-top action adventure romp. It has been adapted into a TV series for AMC starring the perfectly cast charismatic Joy Nash as Plum and Juliana Margulies (of The Good Wife) as the stick-thin evil editrix of the magazine where Plum works.

Author Amina Akhtar was at the front lines of fashion for 15 years as an editor and writer for publications like Elle and New York Magazine. As a Pakistani American, she was one of the rare people of color in the room at her various jobs. Her book #FashionVictim has been called "Devil Wears Prada meets American Psycho," and that's certainly an accurate assessment. The book is the story of Anya St. Clair, a rising editor who is not sample size or mentally stable, all of which results in hilarity and a body count. In between the madness we see some of the real struggles overweight people and people in fashion and publishing deal with. The book is equally an accurate glimpse into the world of fashion magazines as it is an insane serial killer crime spree.

How much of you and your personal experiences in fashion and publishing are in Anya St. Clair?

The book is definitely a mix of fiction and some of my experiences. It's not a tell-all, but I think it's fun to pull from your own life when you write anything. The racist comments and the size shaming were a real part of my experience and I felt they were important to include. And, okay, maybe I had to duck when shoes were thrown at my head. But a lot of jobs I've had — while having glam moments — were boring. No one wants to read a book about doing SEO and publishing a site! That'd be a snoozefest.

Do you think things have gotten any better for people of color and plus-size people in fashion?

I think things are getting better. We have a ways to go, but you're seeing more diverse mastheads for magazines and websites, which is awesome. I want to see more writers and editors from a variety of backgrounds, more plus-size writers and editors, and more gender non-binary ones, as well. When you have a good mix of people, you end up with better content. It's kind of crazy to me that Vogue just had a black photographer shoot the cover for the first time ever. That should have happened a long time ago, and when more people of color or editors of various sizes and genders are in decision making roles, we'll see better change.

What are the issues you dealt with as a POC and non-size zero?

Oh gosh. I'm Pakistani and I'm anywhere from a size 8 to 14. I've been told I'm the token diversity hire, that I shouldn't hire people from a certain race or who have "ethnic" names. I had one publisher at a major magazine I worked for tell me he had a fabulous time with me at dinner in Paris the previous week. Only problem? I wasn't in Paris! I was in LA. I tried to laugh it off because it was so awkward, but he insisted we spent an evening together. I still have no idea which brown woman he was with. I had another boss compare me to terrorists on 24.

The size issues were sometimes more subtle. You know, you'd get a look and you wanted to just shrink into a wall. I wasn't allowed to eat in front of one boss, and at lunch meetings I had to skip eating. I was put on diets. I've had colleagues poke my belly or grab my breasts because they're large. I don't have a fashion figure — which I'm okay with now! But then it was really difficult to deal with. I had gained a lot of weight at one point from medication and getting dressed every day and going to work was an exercise in hating myself. Unlike the book, I never had to weigh myself or do planks. But I did have an editor tell me she saw scales at one women's magazine's bathrooms.

You say you're ok with your shape now. What happened to make you accept yourself?

Honestly? Leaving the fashion world and being out here in Arizona. No one cares what I look like here and that's helped me get a better sense of body confidence. I also don't wear makeup out here because who cares, right? Also, when I talk about fashion figures, I mean even if I lose weight and get to a size 4 — ha, not happening — my boobs are still an F cup. I can't fit into anything! So unless I have major surgery, I have to get over it. I always try to hide my curves, but then I go on Instagram and so many awesome bloggers are flaunting theirs. I love it. I love them! When I was still in NYC and going to the occasional fashion event, I felt like people were staring at me. They weren't, but I felt like they were. I felt like I was just this huge person who shouldn't be there. I do think seeing so many plus-size bloggers rise in importance and status has also changed my views on myself. They're not wearing all black and hiding like I did. Representation matters! I hope other girls and guys who feel bad about their figures see them and have that lightbulb moment that they're perfect as they are.

This book is really bananas. What inspired you to make it so over the top and featuring a serial killer?

I love dark stories, I do! I love books that are unsettling. Gone Girl and You are standouts for me. And I knew I could never write a straight send up of the fashion world. It's just not my personality. So I thought a serial killer would be kind of hilarious. But I also wanted to make everyone so over the top and kind of awful so you're conflicted on who to root for. I think you should make anything you create true to who you are — and that means my story is dark and funny.

​Was it hard to leave fashion?

Yes and no. It's hard to leave a career you worked so hard for. But the era of having a long term career in publishing is ending. A lot of editors and writers who are nearing 40 are finding they can't get hired for jobs. That's rough. It took me years to figure out what I wanted to do next. But once I started writing fiction, it felt like home. You know that cliché about not working a day in your life if you're doing what you love? That's me, now. And I love it. What was hard was leaving the people. I miss my friends like you and people who are generous and smart and funny.

What do you do in AZ to get your fashion and glamour fix?

Sephora! The sheer amount of products I order is insane. There's nowhere to dress up for around here, so I live in jeans and a tee shirt. But you'd better believe I'm rocking some Fenty and Nars when I run errands!

#FashionVictim by Amina Akhtar is out now.