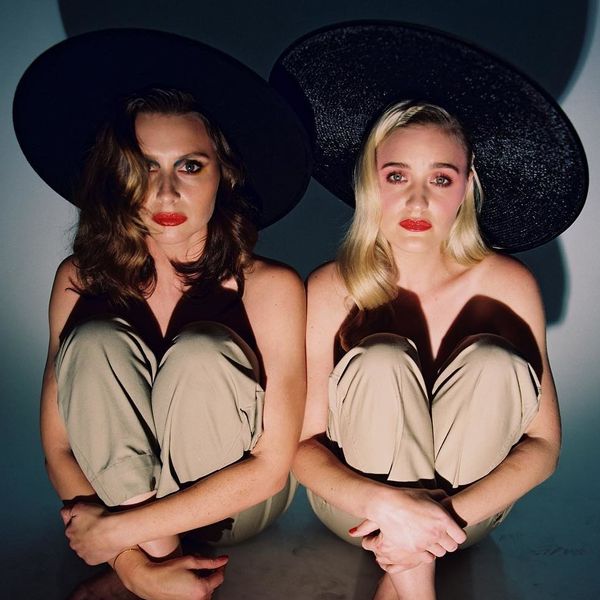 Op-Ed: Aly & AJ on Mental Health, and The Trevor Project

Sisters Aly & AJ have worked in the public eye since they were teenagers, rising to fame inside a Disney machine that turned young performers into career-driven, workaholics for the masses to then consume and enjoy. As spectators, the entertainment industry's child star model (Miley Cyrus, Selena Gomez, Demi Lovato) can seem aspirational, but that comes without seeing the hours of labor, the immense pressure, and the demand to maintain success across years.

All the TV shows, movies and music collectively impacted Aly & AJ's mental health, but the two powered through and have since learned how to live — and thrive — with depression and anxiety in their adult life. With a family history of mental illness, the sisters know this space well, and have transformed their music-making platform into an opportunity to be vulnerable with their fans and, in turn, encourage them to create change.

Last summer, the alt-pop duo's Ten Years single, "Good Love," was released as a love letter to the LGBTQ community, and felt like a shift in the way their music could rally behind important social causes. Their 2019 single "Church" similarly speaks to all the outsiders ("I need redemption/ For sins I can't mention"), and signals a powerful, new chapter of music in the coming months.

The sisters' latest track, "Don't Go Changing," out today, is an emotional plea to a lover, and will be performed live on a summer tour that benefits The Trevor Project "to help as many fans as possible and to create a safe space for them," they say. The national organization provides crisis intervention and suicide prevent for LGBTQ+ people under 25, which mirrors Aly & AJ's own mission to use music as a vehicle for destroying stigma.

Below, PAPER invited Aly & AJ to write an op-ed about their shared experience with mental illness, and the ways they hope their Trevor Project partnership will help fans struggling with self-love.

Aly: It started for me toward the end of the first season of production on Phil of the Future when I started noticing intense feelings of unhappiness alongside the inability to focus on set. These racing thoughts of worry and sadness came out of nowhere, especially since I remember being a happy and content child growing up. I think the stress of working 10-hour days accompanied with splitting my time between on set work and school work became an overwhelming burden that felt as if it had manifested overnight. My mom immediately started to notice a change in my personality and mood both on and off set, so she thankfully set an appointment with a psychologist to discuss my struggles in person. After describing my symptoms in detail, taking a mental health assessment test, speaking about my overall daily routine and sleep habits we came to the conclusion that going on a low dose of anti-depressants might help. What followed was a breakthrough. The following months felt like the sun was finally shining on me for the first time in ages.

I know many people have negative feelings towards medication and the dependency of using them (which I'm personally not ashamed of), but they didn't have the effect of making me feel like a zombie and I didn't think it numbed my personality in any discernible way. There exists a stigma behind prescription medication. It seems to me likely that America suffers from a crisis of both over medicating and/or misdiagnosing. Out of this comes remedies from the opposite direction, often looking like impotent self help books and "how to's" when our struggles live in a much deeper space.

"It started for me toward the end of the first season of production on Phil of the Future when I started noticing intense feelings of unhappiness alongside the inability to focus on set."

Balancing serotonin levels goes far beyond meditating, a healthy diet and proper exercise. However, those things can play a massive role in accomplishing mental stability. Prayer, reading, travel, and relationships form part of my ability to cope and move forward. The most memorable way my psychiatrist described my symptoms to me was, "There's a barking dog that's yapping in your face telling you you're not good enough, you should be worried, you have too many things to accomplish in the day and you should be better at life. That dog is now on a leash in the backyard of your mind." That "dog" became a lot less prominent and a lot less scary once I started anti-depressants accompanied by monthly visits to my therapist. I can't say this works for everyone but it worked for me.

AJ: These same feelings began to develop in me only a year after Aly. This wasn't surprising since we have a long history of mental illness in our family. My personal struggle happened to fall more in the category of extreme anxiety and was/is handled accordingly. Thankfully we had the tools to battle this head on with the help of proactive parents. We have heavily leaned on each other as sisters during our different seasons of depression and anxiety. We honestly don't know what we would have done without each other. We know not everyone is given the same privilege. We consider ourselves very blessed to have come out the other side. But it is a continual and daily struggle for us both.

Aly & AJ: Both of us hope talking about our lives removes some of the stigma of someone else's struggles. Our commitment to spreading awareness for those dealing with mental health issues is a guiding theme not only for our most recent record but for this tour. It just felt right for us to team up with a group like The Trevor Project to help as many fans as possible and to create a safe space for them, online and at our shows. We know so many LGBTQ+ youth in particular are struggling with feelings of self-worth. Our world is not yet as just and compassionate as we hope it will someday be. We want to give every possibility of overcoming that. Just within the small community of people who listen to our music exists an unknowable and vast amount of human potential, love, and possibility. Knowing so many young men and women coming to our shows were once closeted teenagers who were able to connect to songs like "No One," "Rush," or "Stick & Stones" brings us great joy. If we can play a small part in furthering any one person's love for themselves then we've done a small good and our fight to get our music heard is justified.

Watch "Church" by Aly & AJ, below, and visit thetrevorproject.org for more information.