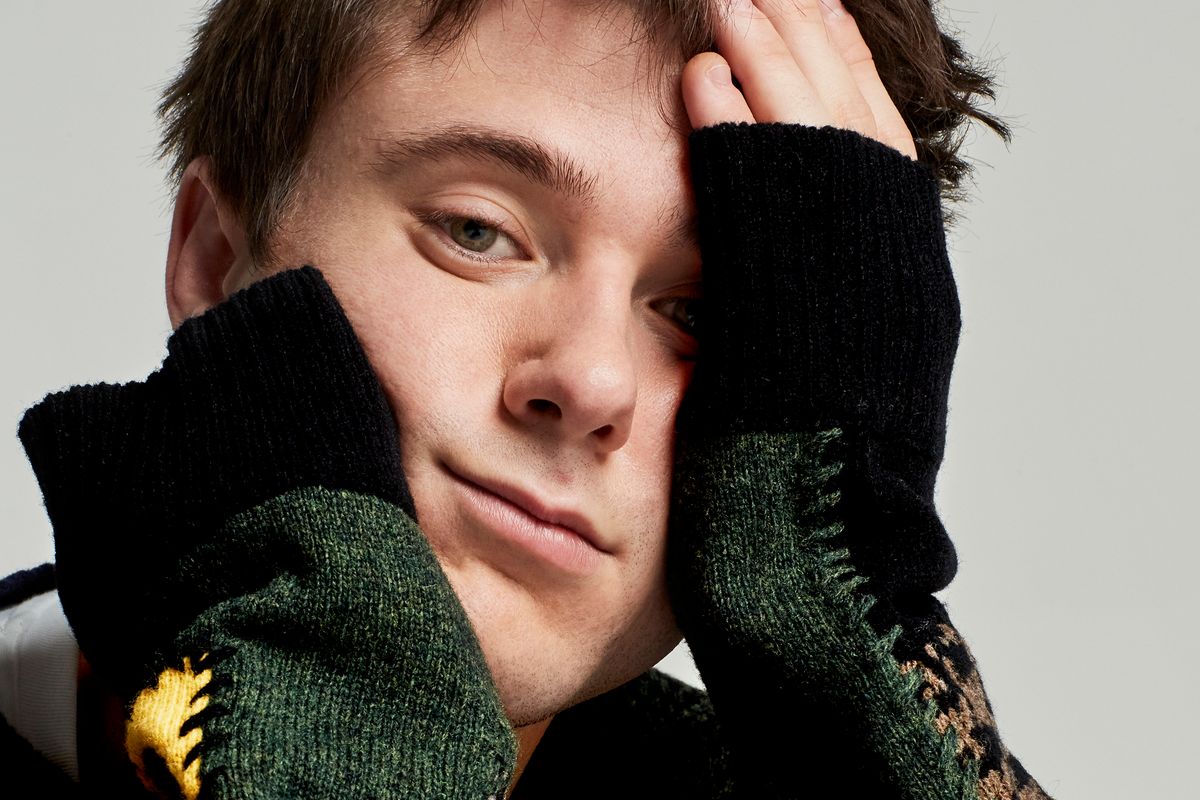 Having recently returned to his adopted home of Orange County from a whirlwind world tour, Alec Benjamin has been so busy he slept through his alarm for this interview. When we finally get on the phone he's effusively apologetic and disarmingly polite — far more so than you might expect from a star in the making.

But this young Arizonian knows the value of patience. Benjamin says he busked on the street and played in parking lots for fans as they waited in line to see other artists like Troye Sivan and Shawn Mendes "for so long" until he got his own stage. Even now, with famous friends, a platinum single ("Let Me Down Slowly") and an internationally acclaimed mixtape (Narrated For You), he grapples with life's challenges like any other twenty-something.

With an endearing innocence that can make him seem closer to 15 than 25 years old, he's a storyteller who's mastered the art of turning everyday heartbreak into compelling pop songs. Surprisingly cognizant for someone who just rolled out of bed, Alec tells us about his brand new song "Mind Is A Prison," befriending John Mayer, and vulnerability.

What an amazing year you've had! Performing on The Late Late Show, doing a world tour and racking up a billion streams of your songs — it's incredible!

Well, thanks for saying that! You know that saying, "A watched pot never boils"? You're standing next to it, it's hard to see, you know? That's how I feel. I'm so close to everything that when someone says to me, "So much has changed in a year!" I'm like, "Really?" [Laughs]. But I suppose it's true.

You still feel like you're just trying as hard as you ever did, and always working towards the next thing?

Yeah! I thought that once I put out my first project the second one would be easier. As I make this second body of music and start putting out new music I realize that it feels like I'm starting from ground zero again. It doesn't feel like it got easier; I think it got a bit harder, which is not what I expected.

I guess you're always pushing yourself creatively and trying new things.

Yeah! You've got to push yourself. Also you have less time, and you're sleeping less and you're eating less, because you're touring. So your brain is not necessarily functioning on 100%. You're also trying to raise the bar from what you did last time, so it just becomes more difficult.

How do you deal with those physical demands of touring? Do you have any strategies that you've locked down?

Yeah, I sleep through my alarm! [Laughs] I'm trying to get better at it, I haven't really quite figured it out yet, but I'm trying to be more disciplined about the food I eat. But this year has been awesome, and all the touring has been amazing, and I feel very grateful that I had the opportunity to do these things. Especially given the fact that I've been playing on the street in front of other people's concerts for so long, to get to do my own shows is really awesome. And the first place I ever busked on the street was in Paris, in front of one of the venues that I actually played at on my European tour, so that was tight.

That's amazing! Life comes full circle. I wanted to ask about "Mind Is A Prison," your new song that dropped today, because it seems like maybe you're reflecting on a lot of these new things that you're going through.

This song is just about how I overthink everything. Especially all this new music and all these new decisions that I've had to make. I think a lot and sometimes I feel like I'm stuck inside my head. People are like, "don't overthink it, just go with it," but sometimes I feel like I don't have the option to get out! So that's what the song is about — feeling like you're trapped inside your own mind. You can be your own worst enemy.

I think that's something that a lot of creative people deal with.

Yeah, I think a lot of people do. Your brain can be a very scary place if you let it spiral. And I think tour allows you to do that, because you're sitting by yourself on a bus for like two months. I'm always scared of the future, especially in music, it's so uncertain. So I get scared and then I make a song, and I'm like, "Is it good?" And then I spiral. It can just be a very dark place.

Do you remember where you were when you wrote this song? You mention California, but is that more of a metaphor, like with your previous song, "Jesus In LA?"

I was in California when I wrote it, but it was more about how sometimes I play a show and I'm in it. Like my body is firing on all cylinders and I'm a part of it. And other times I feel like I'm sitting in my brain, and I'm like, "Who am I?" you know? I just turned 25 and I've been having an existential crisis. Sometimes I wake up and I look out the window and I'm like, "What is this?!" [Laughs] You ever have that? Just about life in general?

Like, yo, what is going on? What the hell is this?! [Laughs]

Well, one thing people say about you is that you're very genuine and honest. What makes you feel so comfortable being so open and vulnerable?

Because I don't really know what else I would say, you know what I mean? But I like to talk about things and tell people how I feel, because to me that's stimulating. Also, I love music, but I like lyrics first. And I think I make music because I always felt like I was misunderstood in school. I always had opinions and things to say, but no one ever really wanted to listen to them. And when I started singing, people started to listen. So I thought maybe if I just put the things that I want to say into my songs, then I can get my message across.

You do have a huge focus on storytelling, which is great. You also have this idealism that seems to resonate with a lot of people. And to an extent you've talked about struggling to hold onto that, in your song "Death of a Hero." Has fame or getting older changed any of that for you? Do you feel like your idealism is being challenged?

Yeah, a lot of my new music is way darker. I mean, I don't feel like I have any sense of fame. When I look at Justin Bieber I'm like that's fame, you know? I feel like I've gotten a certain level of recognition for my music, which is very cool and special, but I don't go home at night and look in the mirror and be like, "It's cool to be famous, man." [Laughs] I don't feel like I'm there. But the last six months have been a much darker time for me. Which is surprising, because I expected the opposite! But I've just been working so hard and been so tired, and also I put so much pressure on myself. Like, I'm so hard on myself. When I wrote this song, I tore myself apart. I tear the cuticles off my nails until they bleed because I get so nervous all the time. It's just who I am. And all of this added pressure and anxiety and putting myself in these positions has really had an effect on me. I think I'm coming out the other end now, I'm feeling much better. But the last six to eight months have been really tough for me.

No, don't apologize! I asked for this! This is what I wanted. And I'm not complaining, it's a good problem to have. It's just like, every time something good happens to me I'm like, "Well, you better write another good song, because if you don't keep writing good songs this isn't going to happen again!" And then I can't enjoy it. But I'm going to try — I might go to Florida with my parents in a couple weeks.

Cute! And in the meantime you can lean on your friend John Mayer.

Yeah, I talk to him all the time! Probably once a week.

What a great friendship you two have!

It's the most amazing thing that's ever happened to me.

I feel like it makes a lot of sense that you two would be friends.

I felt that way too! I mean I was shocked when he started posting about my music, but also a part of me was always like, "John Mayer would love my music." So when I was younger I emailed his first manager, Michael McDonald, and all these other random people, just trying to get in touch with John Mayer. I DM'd him, I did all this stuff. A part of me was like, "He'll never hear it, and if he does hear it he's not going to like it." But getting to meet John Mayer was one of the highest points of my life so far. Which is also interesting, with the "Mind Is a Prison" thing. I feel like one of the things about doing a career like music is one day you're at John Mayer's house, meeting the person that you idolized as a kid, and still idolize, and then the next day you're at your parents' house. The highs and the lows — it's very bipolar, this life. It can be very confusing. Like when you play for 5,000 people, and then you get on a tour bus and your phone's not ringing, and no one's answering your calls, and you're sitting by yourself. It can really mess with you.

John Mayer has also talked about having a quarter-life crisis, right?

Yeah, in all his music. I didn't understand what it meant until now!

It's nice you can relate on that stuff.

It would be awesome if he showed up on your album!