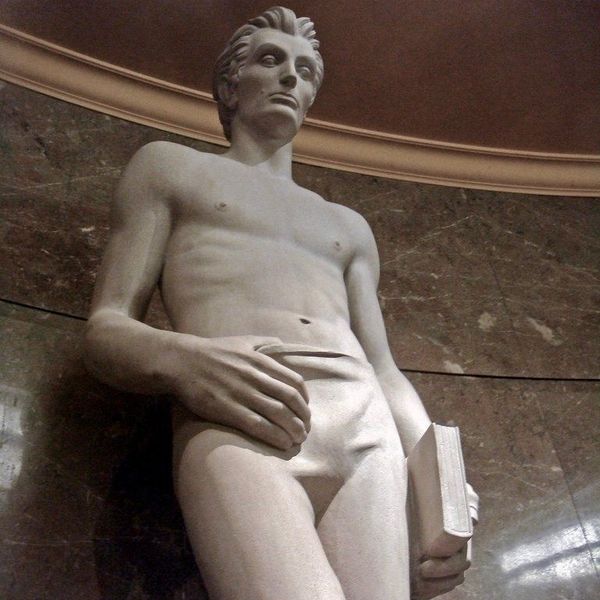 Why Is This Abraham Lincoln Sculpture So Thirsty?

Classical art and history have a long and rich relationship with the Internet. Anyone who's been to a museum in the digital age (and is not snobby) knows the joy of attributing post-hoc emotions and humor to nude marble men and stern, facially disproportionate renaissance paintings.

The answers are: then-22-year-old Los Angeles sculptor James Hansen, and the U.S. government, which commissioned the New Deal-funded piece in 1939. The sculpture is titled "Young Lincoln," but Twitter, upon discovering it, has proposed a number of renames including Abs Lincoln, Baberaham Twinklon, The Gettysburg Undress. And some steamy Abe fanfiction, which, as one user pointed, out, there's already quite a lot of on the Internet.

One diligent user even uncovered a Life magazine article about Hansen and the sculpture, calling him "the biggest success story in modern sculpture."

"As a model for his gangling young Lincoln, Hansen, who is 22 and gangling is using himself. When he finishes he will turn the statue over to the U.S. Government Section of Fine Arts and get $7,2000 for it." Hansen was apparently so hyped when he got the commission, "When he won the $7,200 award, he was so shocked that he bought a new car, promptly wrecked it."

Hansen may have used himself as a model, but clearly Lincoln has always been a sex icon.

Tribute Brand Is Making 'Contactless' Clothes for the Cyber Age