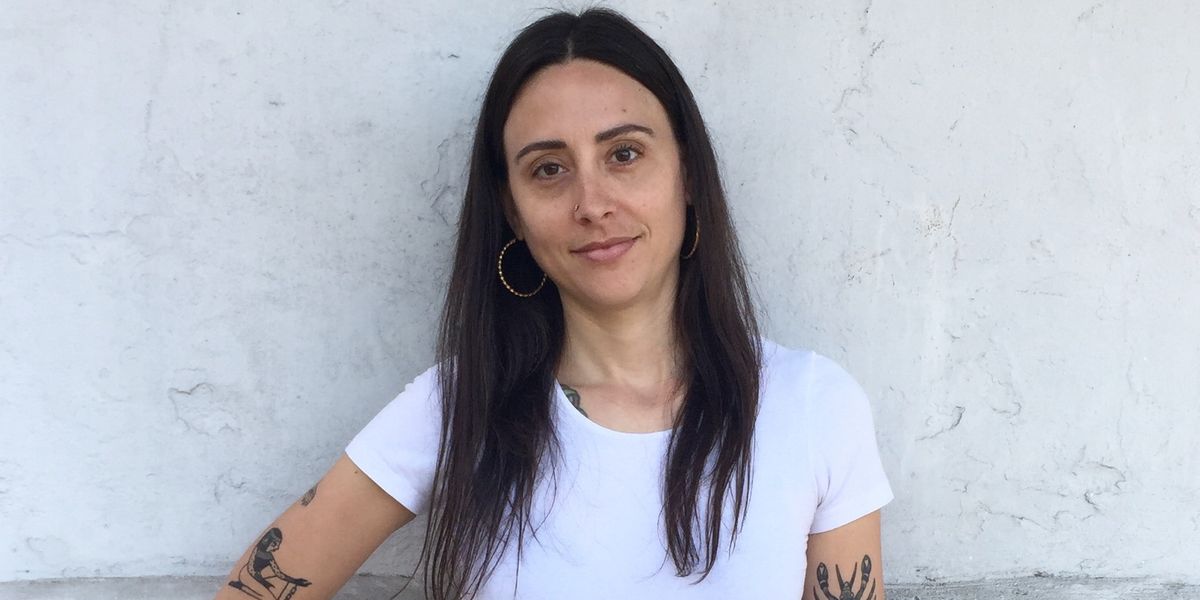 Artist and Spiritual Healer Rachel Howe on Astrology, Activism, and Saying Hell No To Fear

Rachel Howe is a Brooklyn-based artist, designer, spiritual healer, stick-n-poke tattoo mastermind, and Instagram astrology guru working under the name of Small Spells. Coming from an art school background, Howe nurtured a lifelong interest in mysticism and healing through the study of reiki, tarot and astrology, while she paid the bills with a line of elegant modern ceramics and T-shirts featuring her groovy drawings. After a few years, Howe ditched the ceramics and made her side gig her main gig, designing a refreshingly contemporary tarot deck, and offering her healing services full-time (read about the time she read our tarot here). She extends her talents to her Instagram account, where she generously offers insight from her years of spiritual work, with beautifully illustrated posts giving thoughtful advice on working with both the cosmic and political energies of the moment. We sat down for a chat with Rachel to discuss mysticism, Trump trauma, and moving forward from fear to help our neighbors and ourselves.


What was your introduction to reiki, tarot and astrology and why were you drawn to them?

The occult and mystical stuff I'd been into my whole life but I never thought of myself as a participant. Then I started getting more healing work on myself to deal with stuff going on in my personal life, and that lead to me learning the healing. I learned reiki first and tarot shortly thereafter. It was nice that I could do them without pressure because it's not like "ok, this is what I do now" it was just on the side so it could just develop at its own speed. So it's now been like maybe 6 years from me working on healing myself to developing my own healing practices. I think the sort of hidden or esoteric aspect to the work is important. Not to keep it as something exclusive or keep it away from anybody, but there is a difference between learning something intellectually and really throwing yourself into it with your whole self. You have a deeper connection that way, but that process is pretty difficult. It's rewarding but it's not easy.

How have you changed the way you live your life since you've incorporated your practices into it?

Most of it has been really internal, and about my own comfort with myself and my own contentment with myself. It's tricky with the language, because [the benefits of these practices] sound the same as other things, but the meaning is completely different. I've been thinking a lot in this political situation, about the idea that people have been given that self-determination is the most important thing, that individualism is the most important thing. That is obviously not working, but people are really clinging to that concept that personal conquest matters more than inter-connection. Then you have a lot of language in healing that is about the self – putting the self first, self care, loving yourself – but the intention behind it is really different. You're doing that so you can fit into the whole in a better and healthier way, not so you can go out and be the best. I do think about being better, but it's less about specific achievements and more about meeting the world in a better way.


On your Instagram it's clear how politically engaged you are, so I'm wondering how do you cope with this terrifying and traumatic news cycle, and do you have any self-care tips?


It is really traumatizing. After January 20th I dipped into a depression, wondering "what's the point." I'm still figuring it out, because I do feel the desire to engage with the government to make change, but then I also feel like the government is pretty worthless at this point, and doesn't reflect the truth of what people really want. I was actually thinking this morning that a lot of what I've been writing about for the past 2 years is about the limiting power of fear. Basically all of healing is, at the very least, to stop fear from controlling what you do or how you feel.

It's interesting now that [this entire political climate] is based on feeding and heightening fear. Fear is not based in anything spiritual, it's an ego thing and it's an illusion. We're looking at all these different things happening thinking "I don't want that" or "I don't support that," but I think the key is that we all have to be lifting up and adding positively to the stuff that we do want. It can feel really minor, but it all adds up. Fear makes you shut yourself in or close yourself off, but being engaged positively with your community is the thing that makes your life better. Smile at the Muslim woman that's walking down the street, engage with your cab driver, talk to your neighbor – if you're saying that you don't want those people to be forced out, then embrace them. It's small, but that's what's actually making the difference in your daily life.

I want to talk about the relationship between the spirituality and healing, and the more activist stuff. I always think, I'm not free and I'm not healed if my neighbor is not free or healed. That is inherently political because people are being differentiated as far as what they deserve in their lives. Even with the DAPL thing, that is just such a clear fight between spirituality and capitalism. I've heard some of the water protectors at Standing Rock, speak about the idea of holy action, and that before any activist action they always say a prayer. Any political action has a prayer attached to it. That was so inspiring because [the water protectors] were out there in the worst conditions, and it seems so obvious that what was sustaining them was spirituality, community, and love. Not anything that we're taught is important or a priority. The actions at Standing Rock feel very emblematic of what is possible right now as far as our culture and society.


Do you have any opinions about what you think a creative's role should be in this political struggle? How can the creative community contribute?

I'm not a lawyer, I'm not a full-time activist, and I'm not a community organizer – there are people doing that, and they just need support. The one thing I think of is that I may not have a lot of disposable income to donate, but I can donate my time. For instance I did this thing with a bunch of other stick-and-poke artists and we donated all the proceeds to #NoDAPL. I can give up a day of my time! That's like nothing! If I have something that people want, that people are willing to pay for, I'll just make more of that! I'll just do more and funnel the money to whoever needs it. Creative people have eyes on them and they have a platform, so why not use that platform to raise awareness and make a little money to donate?

What made you decide to start writing about astrology on your Instagram and giving people advice on how to work with the energies of the moment? It feels like such a charitable gesture to offer that insight to people.

It all started when I was first learning about astrology and I was really going through some stuff in my personal life. The things I was learning about my natal chart started making sense in the context of the things happening in my life, and that brought out all of these thoughts, feelings and connections [between my personal life and astrology]. I just put it out there [on Instagram] out of boredom or whatever, and then when people started really responding and saying they related it was just really validating just for my own learning of astrology. I'm not trained in astrology – it's all very intuitive – so it felt very nice to hear feedback like "oh, I'm feeling the same thing" and that my intuitions are helpful. Then I just started doing it more! It's helpful for my own sense of humanity to know that what I'm feeling is not just connected to the universe with the astrology connection, but to other peoples' lives. It just builds this universal connection that just feels really good.

I think people are feeling powerless, people are feeling unhealthy, and people are feeling disconnected and so these [mystical practices] seem to offer a way to feel more connected yourself, your body and society. I'm fine with the trendiness of it! Some of it feels very surface to me, or inauthentic and if you're making tons of money off of it, it just feels weird. I'd rather have at least [superficial mysticism] be there than witch burning and stuff, so maybe it can become a sort of normal thing and people can venture a little deeper. It's a process! When I first started, my only agenda was just to make myself feel better and to get my life on track, and I was not concerned with anyone else. But once I did get my life on track, and I was in a better place, it stopped being about me and I started asking myself "how can this help other people." Everyone's gonna be at a different stage in their process about what they think mysticism can do for them, and ultimately I don't think mysticism is just for your personal happiness. I don't think it's like The Secret where you use it to get a big house or something, but you have to start somewhere. These practices being more normalized is great, but if you're a person that loves to smudge your house, you now have a responsibility to care about things like Standing Rock, because that culture is where this practice came from. If you're going to engage with this kind of spirituality and have it be a normal practice in your life, you have the responsibility to investigate it and go further with it, or you're not necessarily being a very woke person.