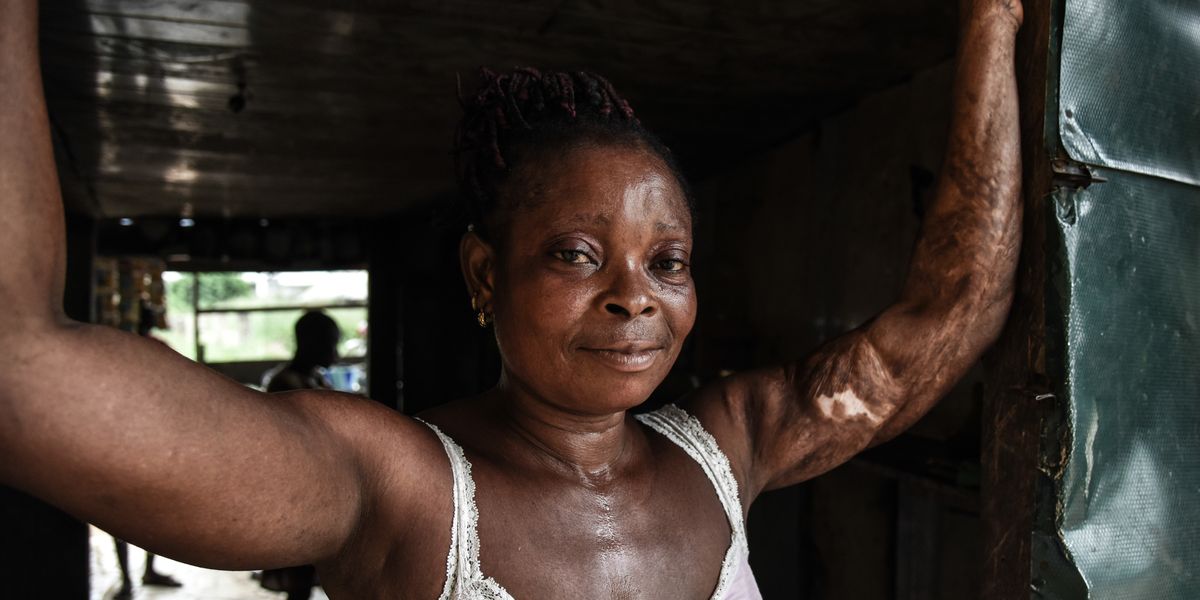 Documentary photographer Yagazie Emezi was in college when she received her first camera — a gift from her then boyfriend who had hoped she would use it to capture her future travels. By the time Emezi graduated from university and left New Mexico to return to Nigeria, she had no idea that the camera she was gifted would lead to a career shooting for the New York Times and Time Magazine and a community of more than 140k Instagram followers.

It's not surprising that Emezi has amassed such a massive social media following. Aside from being a stylish muse for some of Nigeria's top designers (she's a fan of local brands Nyosi and Gozel Green), her Instagram page reads like a visual love letter to Africa — one that continuously grows in content and beauty. A self-taught photographer and freelance storyteller, Emezi has set off on her own to document Tanzania, Zambia, Ghana, Gabon, Liberia, Uganda, and several other African nations. Many of the images she's captured in these places primarily centered the people she encountered and the stories she was trusted to retell. Women in particular have played a major role in her work. Her on-going project "The Process of Relearning Bodies" highlights women around Africa living with body and face scars that they received from general accidents.

Her decision to focus on scars was a personal one. The concept developed from her experiences growing up with a scar on her leg and recognizing a shift in how people looked at her scar in America compared to how they did in Nigeria. Emezi's desire to not sensationalize scars but simply document their existence is something she hopes will be applied to all facets of African life. Like many of the young African creators pioneering new approaches to local art, Emezi's work has sought to counter the often tragic narrative currently being retold about the continent, and hopes her work will contribute to a more natural and honest documentation of African life.

For her part, Emezi is careful about how she captures the people and places she interacts with. As a woman born and raised in Aba, Nigeria –– a place that although an hour flight from Lagos is vastly different than her new city dwelling –– she realized that Africa in all of its massiveness cannot be painted with the same brush. In recognizing this, she has diligently applied reason, ethics, and artistic vision to present a more colorful and vivid image of Africa. One of her most recent photography projects, "And They Say We Are Lazy" speaks to this mission. The project tells the story of Nigeria's young models and their thirst for success as a way to dispel the myth that Nigerian youth are lazy or unwilling to work.

Yagazie Emezi spoke with PAPER about the ethics of capturing African life and her most recent photography projects.

When did you first become interested in how the general media depicts Africa?

I started to take more notice as I got deeper into photography when I moved to Lagos and started sharing images of my experience. I was getting feedback from people in the diaspora who were saying, "We didn't expect Lagos to be like this, we didn't know that this was there." That's when I really started questioning not just how other people were seeing Africa, but also how I was seeing it. One of the reasons why I moved to the city was because Lagos was not the Nigeria that I had experienced growing up. When I spent my first time in Lagos in 2012, something as simple as the AC, swiping cards, and other technology was something that completely caught me off guard in comparison to my childhood in Aba.

Are there times when you had to check yourself about the way you were capturing an African community?

When I was working in a Liberian slum, I was very hesitant for a long time to call it a slum. I was discussing it with my co-workers and a lot of them who live there were like, "No, we live in a slum, this is a slum." I had been so cautious because some people romanticize what a slum is and try to create this grimness around it when it's really sometimes, nothing other than an overcrowded community space. A woman was just like, "No we live in a slum. Our conditions are actually shit, we have no running water, no access to clean water." And here I was, in some self-righteous bid about to write a piece to call her home something that she didn't even recognize.

"Not every story around people of color has to be this super tragic event."

What inspired your popular ongoing project, "The Process of Relearning Bodies"?

Like most projects, it started off personal. I grew up with a big scar on my leg that I didn't pay much mind to until I moved to The States and started getting stares. It was just really exploring how communities impact the way we see ourselves. It started off with traveling around Nigeria for a bit and photographing women who have scars. Photographing scars is not a new concept but I realized that a lot of the images that I did see of women in particular, with scars, were gotten through some form of violence or abuse.

Not every story around people of color has to be this super tragic event, even though trauma is trauma at the end of the day. I focused more on women who had gotten their scars from everyday accidents and the process in which they learned to recognize their bodies again after that. The goal initially was and still is to share that with a wider audience because I think a lot of women of color in particular suffer silently when it comes to what we deal with regarding our bodies. The project was exploring the different stages of healing that the women were in.

How has the project evolved over the last few years?

At this point, I'm removing the faces from the bodies because it's a thing where people gaze at the face and the scarred body with a bit of morbid fascination. I want to really bring in tighter, close-ups of these scars. When people first see the scars, they don't know what it is and this questions whether we can recognize scars the same way we recognize faces. For me over time, the goal is to see people with scars and not look a second time because scars have such a commonplace on the human body.

Why the focus on capturing the stories of African women?

The majority of my stories have always been focused around women and over the years, more on their health, beauty, and sexuality. I remember at an exhibition where I asked people, "When you look at these portraits of African women around the continent, are you looking at them because they are women or are you looking at them because they are Black? What draws you in first? Is it fetishizing blackness or darkness or contrast? I really think my work will be done in that area when you look at an image and you're just like, "Oh, it's an image of a woman combing her hair" versus (an exaggerated) "wow a black woman running her comb through her thick kinks."

"A lot of women of color in particular suffer silently when it comes to what we deal with regarding our bodies."

What sparked your interest in fashion photography?

Fashion is culture. I would be doing myself a disservice if I say, "You know what, fashion is just this flimsy artificial thing in our world." I mean back in the day when I started in photography, I definitely didn't enjoy it because I was just taking pictures of products and there was very little people interaction. Now I'm actually constructing stories, addressing real topics and issues, and it's a nice break away from documentary because I have a lot more time to share and create with people.

What inspired you to create "And They Say We Are Lazy"?

In early 2018, the president of Nigeria, Muhammadu Buhari, passed a comment on Nigerian youth being uneducated and waiting for handouts from their oil producing nation: "More than 60 percent of the population is below 30, a lot of them haven't been to school and they are claiming that Nigeria is an oil producing country, therefore, they should sit and do nothing, and get housing, healthcare, education free." While the presidency later clarified "not all youth," the statement was still met with anger, particularly on social media where #LazyNigerianYouth was created and people used it as an opportunity to promote their work, businesses and show off their impressive achievements.

And "They Say We Are Lazy" is a fashion production that addresses the statement. At first, "idle" youth may be apparent. However, once broken down literally, the images showcase two working Nigerian models from one of the many successful youth-led model agencies in the country. They are wearing pieces by Nigerian labels Wekafore and Wafflesandcream along with the Spanish brand Outsiders Division. The work represents the collaborative, creative and entrepreneurial spirit of Nigerian youth who are not all, lazy.