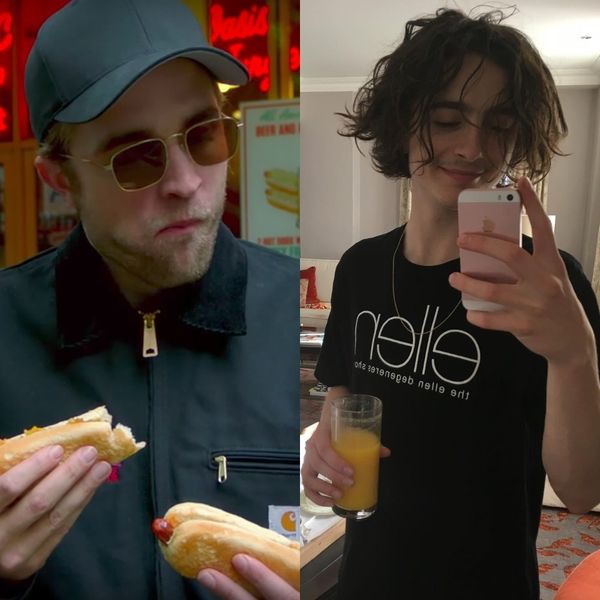 Why Can't Male Celebrities Feed Themselves?

Famous men are having a hard time in quarantine. We were recently treated to Robert Pattinson's concerning kitchen habits via his GQ cover story, during which he tried to create a microwaved, sugar-encased "handheld" pasta. He described some of his favorite meals: "I'll have oatmeal with, like, vanilla protein powder on it. And I will barely even mix it up... I eat out of cans and stuff. I'll literally put Tabasco inside a tuna can and just eat it out of the can."

His friend and The King co-star Timothée Chalamet is faring no better. Without his Tompkins Square bacon, egg and cheese, Chalamet appears to be subsisting on honey, Triscuits and Kraft macaroni and cheese. He shared a blurry, captionless photo of his pantry yesterday (quirky!). Someone aptly commented: "YESSS GIVE US NOTHING KINGGGG." Other fans are worried for his nutrition and mental health.

I get why Timothée might be having trouble putting in the effort. He put a huge year on hold when COVID-19 shut down the entertainment industry: Dune, The French Dispatch, Find Me and his London theatre debut 4,000 Miles are all on pause. He also recently ended things with his fellow French-American snog buddy Lily Rose-Depp.

But why can't these high-cheekboned, effete male celebrities bother themselves to order takeout? I suppose adolescent breakouts like Timo and Rob have literally never been responsible for arranging their meals: their mothers passed off meal duties to agents, publicists, caterers and craft services. Here's a show I'd watch: Negroni king Stanley Tucci queer eyes Robert Pattinson and Timothée Chalamet. Just saying, Hollywood.