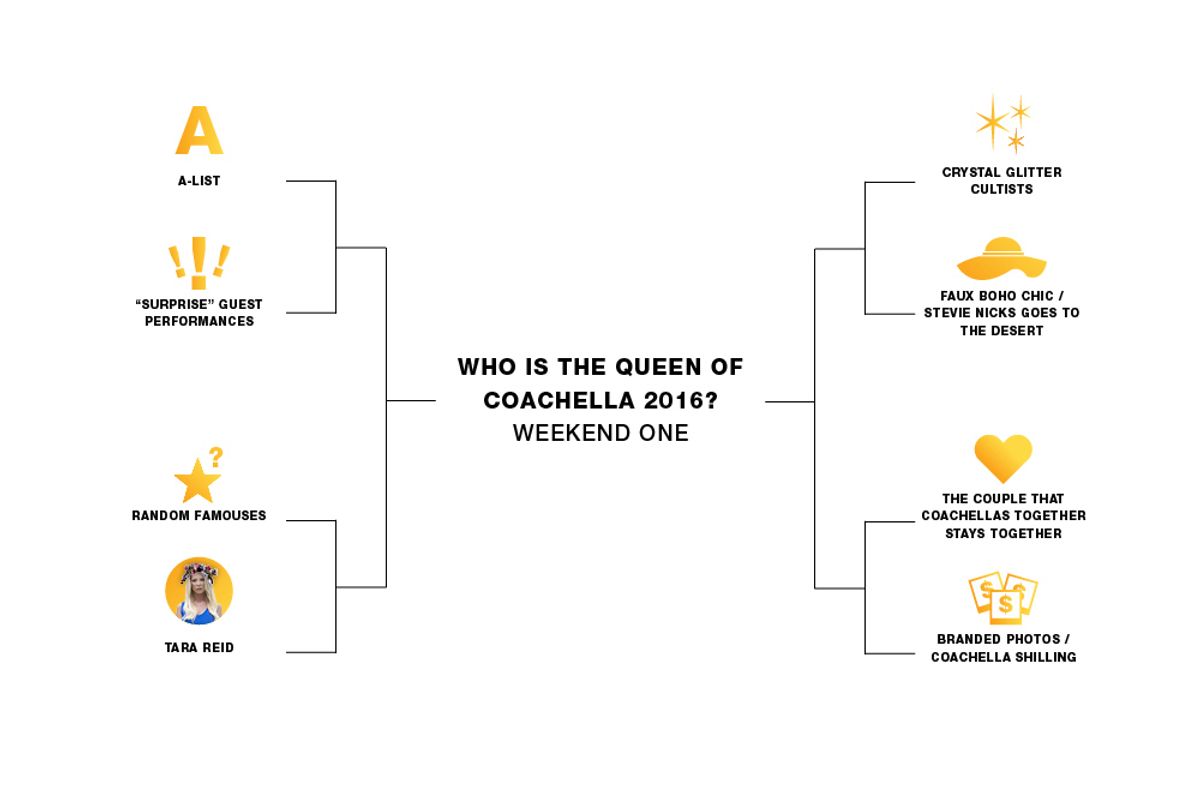 With the endless write-ups of Coachella fashion and round-ups of Instagrams, we just want to cut right to the hard-hitting, important journalistic questions: Who was the reigning Lordess of this nightmare oasis? We've broken this year's festival nymphs into a few tangible categories: A-listers, random famouses, crystal glitter devotees, faux boho babes, brand fans, power couples, and Tara Reid. May the best Coachella Queen rule this cruel desert.

Match: While we can't deny the glory of Rihanna bump Calvin Harris's set into the stratosphere, Kesha's triumphant display of her raw talent, singing "True Colors" with Zedd, was a real emotional moment.

Match: This was also a tough one, given the amount of crystals, glitter, and generally shiny shit Coachellans wear. Bella Thorne, with crazy sparkle eyebrows and temporary septum piercing gave us "Manson follower who got lost in a Michael's" vibes. P.S. Who is Bella Thorne?

Match: It takes a lot to look like you literally live in the earth, your only shelter the filmy shawl you've draped over your head. But lord knows, our multimillionaires know how to pull it off, and Victoria's Secret model Alessandra Ambrosio could teach a master class.

Brands and the Celebs Who Love Them

Match: Coachella started life as a music festival, but unsurprisingly has become essentially the lobby of a really-nice resort, with brands desperate to get celebrities to take photos and promote their names. And celebrities, also unsurprisingly, are eager to help. No one was as gleeful in their embrace of both Coachella style and corporate hashtagging as Kellan Lutz.

Couples That Coachella Together

Match: Nothing bonds a relationship like wandering Indio hand in hand with your bae. Bella Hadid and Abel Tesfaye showed the most effortless festival canoodling--the romantic equivalent of trying on a nice floor-length sweater-coat.

Winner: Bella Hadid and the Weeknd.

Match: Again, a hotly contested category--we almost gave Bella Thorne two bracket entries--but we had to go with that fucking guy from DNCE. We're taking a risk here, but we don't know his name and we're not going to Google him. Congratulations, dude.

Match: We hate to pit these two against each other, but we see Taylor All. The. Time. It was refreshing to see Kesha out there doing what she does best, singing and performing and rocking rainbow hair.

That Fucking Guy from DNCE vs. Tara Reid

Winner: That Fucking Guy from DNCE.

Match: Bella's got the desire and the heart but she just can't take down number one seed, veteran Coachellanista Ambrosio.
Winner: Alessandro Ambrosio.

Bella Hadid and the Weeknd vs. Kellan Lutz

Match: While they were as organic as a Indio sunset, we had to give it to someone who approaches life, but especially Coachella, like it's the most intense frat party ever.

Kesha vs. That Fucking Guy from DNCE

Match: Sorry dude, Kesha's got our vote. (By the way, his name is allegedly Cole Whittle.)

Match: Her fashion was on point, and his was wearing 12 fake tattoos and no shirt.

Match: Honestly, every millionaire who can spend a weekend doing nothing in the desert is a winner. The real winners here are everyone who decided to bring their taxes with them to Indio.

Winner: Everyone who mailed their tax returns from Coachella today.