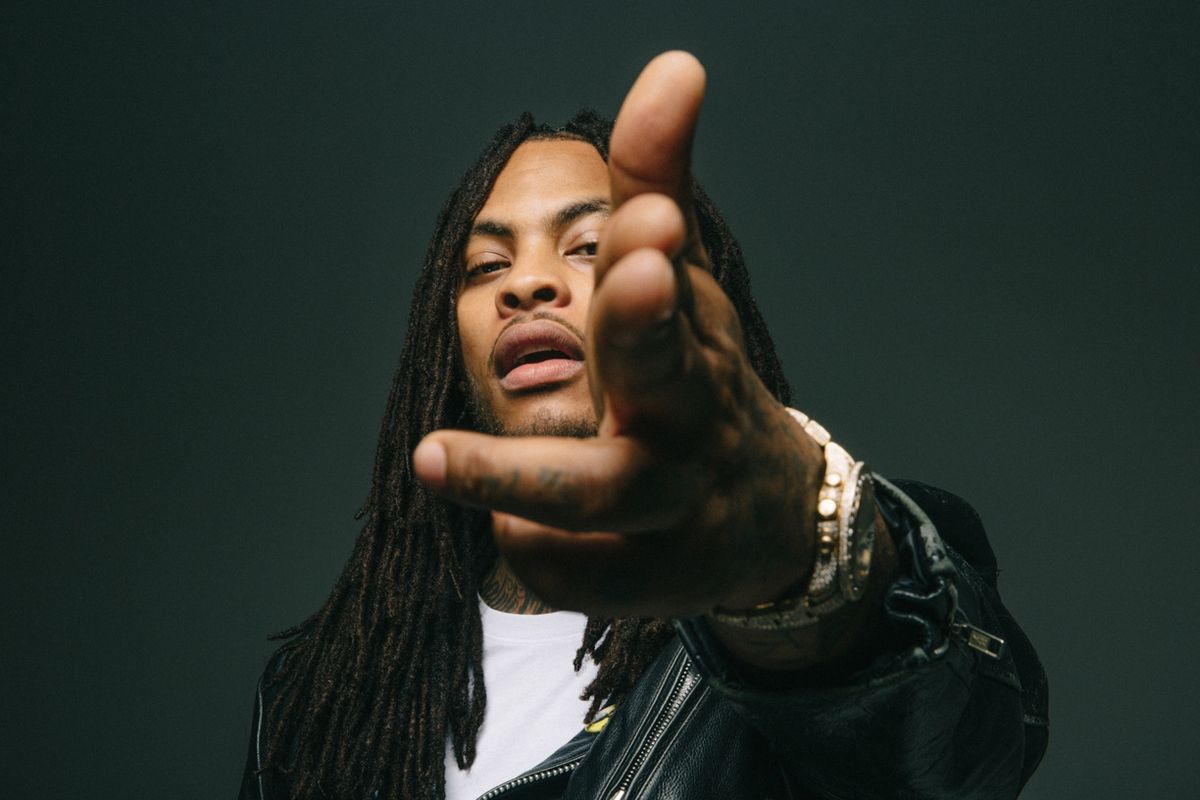 Waka Flocka Flame on Bitcoin, Gucci Mane and Why Vegans Are Like Cops

Waka Flocka Flame (born Juaquin James Malphurs) is the Atlanta rapper whose 2009 singles "O Let's Do It," "No Hands" and "Hard in da Paint" put him on the map as one of the hottest and hardest rappers in the mainstream. His debut album Flockaveli was released shortly after Waka was shot in the arm during a robbery in 2010 and was followed up by 2012's Triple F Life: Friends, Fans & Family.

That was the last studio album Waka put out, and since then he's appeared on Love and Hip Hop alongside his wife, Tammy Rivera, and on their own VH1 show Meet the Flockas, putting his personal life front and center for the world to see. Originally a member of 1017 Brick Squad, Waka and Gucci Mane have since had a protracted falling out.

Still, the rapper — a Gemini, as so many rappers are — has stayed positive through the ups and downs, including the death of his younger brother from a self-inflicted gun shot wound in 2013, which he's since said was something of a wake up call. We got on the phone to catch up with Waka, now preparing to bless the people with the long-awaited release of Flockaveli 2, and chatted about everything from veganism to Bitcoin:

I'm alright, I really just got into the studio, I pulled an all nighter.

Are you in every day right now?

Oh shit, lately I've been in there every day.

Is this for the upcoming album or is this other stuff that you're working on?

I finished the upcoming album. I'm actually going to drop a mixtape before the album, because I just think I need to put people in the world of Waka. I think it's arrogant to put a CD out, and people's waiting, I think I just need to put a lot of music out just so I don't get out too late with this album.

So you're not waiting on a label or anything holding you up?

No, I'm not waiting on nobody, this is all Waka. As soon as I hear the people calling for it, I'm dropping it.

I think they're calling for it now.

Well, I'm about to drop it. I got a CD before this album, Zaytoven produced the whole thing. I want to put that shit out before my album, I think the streets deserve that. Atlanta deserves that, and we doing this CD for Atlanta.

Yeah, that shit is crazy. I ain't even gonna lie, this CD is fun. I promise to God, this shit is fun.

There's been such a conversation about mixtapes versus albums, what is the defining difference for you?

Nothing, they're still an album. They just change the name, trying to make it cheaper. I treat it like an album, I just ball. Because if it's wack, then at the end of the day people are like, "Dang, why'd you put that wack ass tape out?" No one's gonna be like, "Man, it's just a mixtape not an album," they're gonna be like, "Man, this shit was wack. This nigga fell off."

It's been awhile since you put out an album.

Yeah, it's been a minute since a mainstream album. The mainstream world was boring, man. It's too typical. You know how people are gonna be marketed, it's typical. Then they get famous, all the designer companies want to send them free clothes, modeling for them. They just go away from what they started being. Honestly a lot of artists get lost in fame, so I had to regroup to learn Waka.

How have you done that? Spending more time with family, spending time out of the spotlight? What does that look like for you?

For me, just traveling the world and taking my time to learn this new person I became, because becoming Waka Flocka was new. I'm just a rapper, so, I had to really dissect it and just really understand who I am and how far my voice is going, the things that I say or how far my words travel. And I just have to take advantage of what I created, and take myself out of the mindset of being an artist. I put myself in the mindset of being a brand and shit changed, man.

Changed in a positive way?

Yeah, everything changes in a positive way. Everything. When I came out, I came out in the days of when MySpace had playlists. I came out during the days when they still sold hardcover CDs, selling mixtape CDs, bootlegs. But see, the artists in today's time with the downloading and all this, and they still complain, and I'm like, man, y'all got it made. Y'all got it fucking made, you literally could become a millionaire rapping in your closet.

Yeah, and with the "SoundCloud generation," it feels like the sound has changed, too.

I don't think the sound changed at all, in my opinion. I just think our listeners are growing up. And people are not accepting the new generation. I think, when people say, "the sound changed," that's when you realize you're getting old. When you're saying, "This ain't real hip-hop, this ain't what it used to be," you're just old, and don't want to accept the new. That's all it is. Mad people saying this ain't hip-hop today.

When I first came out I was getting the same kind of blame that Lil Yachty, Playboi Carti, 21 Savage and Uzi Vert are getting, Migos is getting. I was getting the same blame. The only thing different is I was by myself, and there's a lot of them. So, fuck it. That's when you realize people are getting old, and they lost the wave, so they're trying to blame it on you.

You had said at one point that Uzi was more rock music than rap?

Uzi is like a melodic rap-rocker, if that name fits. He's unique, he's different. I like him.

Also, people get so tripped up on defining genres. But really, it's all music right?

It's all music. People act like artists weren't wearing tight-ass jeans and big-ass gold chains back in the day. They were doing the same shit, and that's what made rappers wear baggy pants, and that's what made Dipset come out with the long big tees, because they didn't want to wear the tight shit. Like come on... I don't know what's going on.

Is there anything you can tell us about the album? I know your fans would love to know.

Flockaveli 2 man, it's just a ghetto-ass CD. I was not aiming for radio, so if I make it to radio, that's a plus. I treat this album just like Flockaveli. I didn't want to come on this thing and make radio records, I don't think I even got a feature on there. If I got a feature, it's probably on a hook. Fuck, I don't even think I got a feature. Every time I let somebody hear my music, they're like, "Yo, what the fuck are you waiting for? Put this music out."

But it ain't like a wait though, I got other ventures! I just bought a gas station, I'm trying to get my liquor license, got a liquor store. I got different kinds of ventures now. Music is fun, but I made some money. Like how rich do I wanna get? I got rich as shit.

You're living your life now.

Yo, I'm living my life 'bout to the damn fullest.

I hear you. Are you still a vegan?

Nah, I dropped the vegan card.

What happened with that?

I think the public scared me from being vegan. I got so conditioned, I got blinded from what's really vegan. I got conditioned to just reading the label, and somebody says it's vegan, so therefore it's healthy. And it really wasn't vegan... I'm at a crisis with myself. I'm at a battle with myself right now when it comes to this. What I call myself now is a conscious eater, meaning I'm conscious about the things I put in my mouth, and about the things that I drink.

I think saying that I'm a vegan is like putting a title on me. I'm making myself sound like I'm better than somebody else. If I'm saying I'm vegan and you're not vegan, what does that make you? A sloppy motherfucker? It fucks with me. Just to seem like, "Yo, you shouldn't eat meat, that's not good!" Like who's to say you can't eat meat? Technically, a plant has just as much life as an animal does, they just don't have the common sense or mindset, but it's the same power of life, it feels everything that we feel. When I started reading that vegans can't eat honey, I was like, y'all going too far. Let me fall back.

It's not enlightened, man. They scare people and shit, like people are really scared of vegans. They're like the fucking cops. When vegans are around, people be trying to throw their food under the table, like oh, the vegans! [laughing]

In your household, does your family cook and eat together? Because I feel like that helps, too.

Yeah, but nobody was vegan. We all became pescatarians.

I feel like everyone is trying to be more conscious about that stuff.

They better, if y'all don't wanna grow an extra pinky. Did you know over 30 or 40 states in America has prescription drugs in the water?

Yeah, check it out. Get a cup, and get it tested out in a lab. Y'all got hella labs in New York.

Prescription drugs in the tap water, I've never heard of that.

You better start watching BET and MTV, there's some real shit on that television.

What did having your personal life on TV teach you about relationships? Has it changed things for you?

Yay and nay. For me and Tammy, my reason for going on Love and Hip Hop was that my woman was just getting a platform. Even though we was in some real shit, for us, it was just giving her a platform. She was tired of just being a, what you call a 'housewife' she ain't like that. So I think that was one of the best platforms to display my wife, as a person, and it actually worked for us. But for me to see her on TV crying and shit, that hurt me though, I ain't gonna lie. It's embarrassing to see your woman hurt like that.

What's next for you guys?

We're in the midst right now of doing "Meet the Flockas." And Tammy just put a whole album together.

Is it true that you're into cryptocurrency, and Bitcoin?

Can you tell me what you've invested in or how closely you follow that world?

I bought some coins called troptions. They're coins that you can actually buy a car with or pay your rent with. That shit is lit.

How'd you get into that?

The president of JP Morgan had said it was a scam, but now he just came back out and said he regrets that and that it's the future.

Yeah, it ain't no scam. It's a serious business. I would get everybody into it. And troptions are my favorite coins.

You've kind of alluded to the fact that you and Gucci are cool now. Is that true?

Yeah, we'll figure it out one day. Just not today. He's doing good though. I'm glad to see him happy. I think that's the most important thing of it all. Just to know where he came from and you see him now; he deserves it.

Head here to purchase tickets to Waka's January 26 show at AVALON in Hollywood.