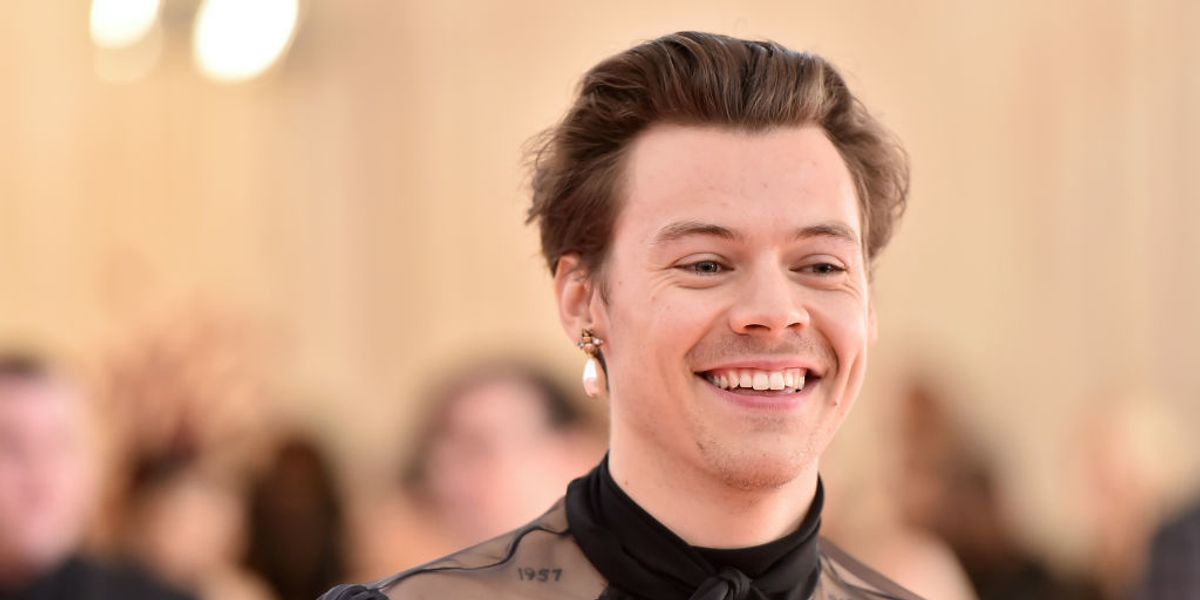 "You're pathetic," tweeted Olivia Wilde. "I think you've missed the definition of what a man is," added Elijah Wood. "Masculinity alone does not make a man," chimed in Zach Braff. Naturally followed by Jameela Jamil.

Of course Candace Owens — or Candy Owens, as Kathy Griffin has taken to calling her — had words to vomit about Harry Styles' Vogue cover. She did what she always does: laid out a trap, and the well-intended took the bait. Like clockwork. Why do we stay so pressed instead of just ignoring her?

Harry Styles occupies a unique fame space in 2020 in that he has the ability to get people that don't care about him to care about the things he does. And such was the case when Vogue put Styles on the cover of its December 2020 issue, the very first featuring a solo man in the magazine's 125+ year history. (For historical context, Richard Gere, George Clooney, LeBron James, Ryan Lochte, Kanye West, Ben Stiller, Ashton Eaton, Zayn Malek, and Justin Bieber have all graced the cover but were always featured alongside women.)

The Tyler Mitchell-shot cover was a moment worthy of day-of fodder (à la Twitter introducing fleets) that's been given long-game treatment (à la Hillary's emails), thanks to human brain worms like Owens and Ben Shapiro. That part is hardly unexpected, but what's more worthy of dissection is those taking the bait and feeling the need to defend Styles, a very famous person who, as comedian Matt Rogers shrewdly pointed out, does not care about any of this.

As Peppermint so shrewdly put it in response to a tweet from Bob the Drag Queen calling out Owen's foolishness: "Girl please don't pay her any attention, her actions do not demonstrate those of a person who is concerned for anyone but herself in her career, she strikes me as a climber and is using you right now for your platform without even having to address you."

This is a far more complex, even cyclical, conversation. Styles has long enjoyed dressing up, mostly for photoshoots, in looks and accessories that are largely seen as femine in presentation: the pearl earrings, skirts, lace, painted nails, tutus. "Am I sprinkling in nuggets of sexual ambiguity to try and be more interesting? No," he told The Guardian in December 2019. "In terms of how I wanna dress, and what the album sleeve's gonna be, I tend to make decisions in terms of collaborators I want to work with. I want things to look a certain way. Not because it makes me look gay, or it makes me look straight, or it makes me look bisexual, but because I think it looks cool."

Many, especially those within the LGBTQ+ community, take issue with this ambiguity. Some call it queer-baiting. "Not you or Vogue giving credit to a cis-man doing what queer people have been doing for decades," one commenter wrote after I posted a shot from the editorial on my Instagram. Others commented wondering why this cover didn't go to out and proud members of our community instead. "We have a whole Lil Nas X right there," The Vixen wrote in the comments section of my post. Others mentioned Billy Porter, or even Jonathan Van Ness. They're not wrong to wonder.

Related | To Talk or Not to Talk About Kamala Harris' Wardrobe

I suppose that a lot of the frustration comes not from the cover itself or how it's digested, but more in how it's disseminated, and the stan-like language that many (myself included) use when talking about these photos — language that's often not extolled when out members of our own community dress this way on the daily, sometimes at the risk of their own safety.

This became super evident after a Poppy stan account (LOL) remarked in a now-deleted tweet: "They invented gender fluidity in the music industry let's be honest" with a picture from Styles' Vogue shoot alongside an image of Conan Gray. People became incensed, interpreting earnestness where there was only sarcasm. "What is gender fluidity about two cis people?" a quote tweet of that tweet wrote accruing 200K "likes" of approval. Je suis épuisé!

But even big publications have taken to writing "in defense of" pieces like "No, Wearing A Dress Doesn't Make Harry Styles Less 'Manly'" or "Harry Styles In a Dress Isn't an Attack on Masculinity, No Matter What Ben Shapiro and Candace Owens Say" which only serve to legitimize the point they are trying to strike down.

I'm reminded of Ellen DeGeneres' response to the backlash she received over attending a football game with former president George Bush. "Here's the thing. I'm friends with George Bush," DeGeneres shared in a video which was uploaded to her YouTube page with the title: "This Photo of Ellen & George W. Bush Will Give You Faith in America Again." She went on to say she's friends with a lot of people who "don't share the same beliefs that I have. But just because I don't agree with someone on everything doesn't mean that I'm not going to be friends with them."

Her response misconstrued why people were outraged. It was not about being friends with people whose beliefs do not align with yours, but rather seeing DeGeneres saddle up with the architect of the Iraq war who supported a constitutional amendment that would have defined marriage as a union between one man and one woman and opposed classifying crimes against gay people as hate crimes.

This all to say, many are frustrated not at Styles, but at Styles being praised for occupying a space many have long occupied — and without any kind of affirmation. And then (because remember, this is complex), many are going out of their way to defend Styles, a person who needs no shelter from a storm this inconsequential. Think: Katy Perry and Ashton Kutcher defending Ellen or Robert Downey Jr. and Mark Ruffalo defending Chris Pratt.

"The thing about this Harry Styles debate is black boys dress like that all the time," wrote singer Kalen Allen. "But when we do it we are seen as emasculating the culture, less than, and feminity is seen as unattractive. That's not a Harry problem, that's homophobia and a double-standard problem."

That sentiment was echoed in great and eloquent detail by writer Alok Vaid-Menon on Instagram. "Am I happy to see Harry be celebrated for openly flouting gendered fashion norms? Yes," they wrote. Do trans femmes of color receive praise for doing the same thing every day? No. Do I think this is a sign of progress of society's evolution away from binary gender? Yes. Do I think that white men should be upheld as the face of gender neutral fashion? No."

But it's not even just white men, so much as it is conventionally attractive cis men, who are often seen as subverting gender norms by slipping on garments that themselves have no assigned gender. Such was the case when Mexican actor Alejandro Speitzer slipped into dresses by Moschino, Gucci and David Koma for a recent spread in BADHOMBRE. But consider Vaid-Menon's words in positioning this as progress vs. progressive.

On Saturday evening, Congresswoman Alexandria Ocasio-Cortez shared her thoughts when asked for comment during an Instagram Q&A: "Some people are mad at [the cover] because some folks are very sensitive to examining and exploring gender roles in society. Perhaps for some people it provokes some anger or insecurity around masculinity/femininity, etc. If it does, then maybe that's part of the point. Sit with that reaction and think about it, examine it, explore it, engage it and grow with it."

Related | Do Straight People Know About the Pink Nike Sweatshirt?

This post was speaking to the Owen/Shapiro faction of the internet, incensed over their idea of masculinity being upended. Ocasio-Cortez later shared Vaid-Menon's post in a follow-up, writing that her response was with the context of seeing right-wing critiques of the image, admitting that she was not aware of the historical context of the cover before Vaid-Menon's post, which she praised as "thorough and nuanced." By adding that critical context, AOC helped to reframe the imbalance in reactions, many of which are centering defending Styles vs. making space for perspectives like Vaid-Menon's.

So my bottom line is this: I like the cover. Will it land in my "best of" Vogue stack that sits adjacent to my nightstand? It will not. It's kind of like a box of pretzels, where the first bite was crunchy and salty and satisfying, only for every ensuing bite to falter in its attempt at the same sensation. It seems as though a lot of the opinions flying around are based on reacting to someone else's opinion about the cover, and an inherent desire to defend or contradict that which is topical.

Sure, there's a conversation to be had about Styles, gendered clothing, privilege, space, etc. But there's also critiques that are less high-level. As Gabriella Karefa-Johnson, Fashion Director at Garage Magazine, wrote, "Is the jacket playing a very obvious role to anyone else? I would have loved this gown solo." In other words, maybe we move past the "he wore a dress" of it all and start to analyze how he wore it. Maybe from there the conversation will finally push beyond shock and awe and into something more.

And for what it's worth: I agree with Karefa-Johnson (I usually if not always do), the jacket was not necessary.