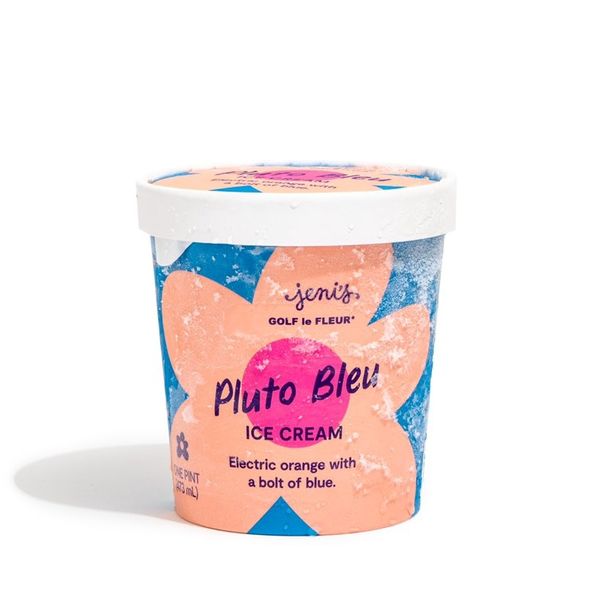 Everyone knows Tyler, the Creator's signature ice cream flavor is "Snowflake," right? Last year, the rapper unveiled his very own mint-chocolate-macadamia flavor in a collaboration with Columbus, Ohio-based artisan ice cream company, Jeni's Splendid Ice Cream and Golf Le Fleur. Snowflake, the green-and-white ice cream, appeared to be meaningful to Tyler, who shared his excitement about the treat's components in its description. Then, of course, came the "you make my snow flake" tweets and other jokes from fans, as many took to social media to rave about the ice cream.

Today, another trending flavor from the rapper has been introduced. His second two-toned dessert has a peculiar name and intriguing description. Behold — Pluto Bleu, or an "electric orange with a bolt of blue," as explained on its packaging, which Tyler designed himself:

Since its elusive name gives little to nothing away about its flavor, Tyler's team elaborated on the new concoction. In a recent press release, Pluto Bleu is described to be a "blood orange flavor" with a "bolt of tropical blueberry," which sounds like the ultimate end-of-summer flavor.

You can get your very own pints of Pluto Bleu online starting September 17 at the Jeni's and GOLF le FLEUR* sites. On September 21, head to one of Jeni's store locations to get Tyler, the (Ice Cream) Creator's treat in person.