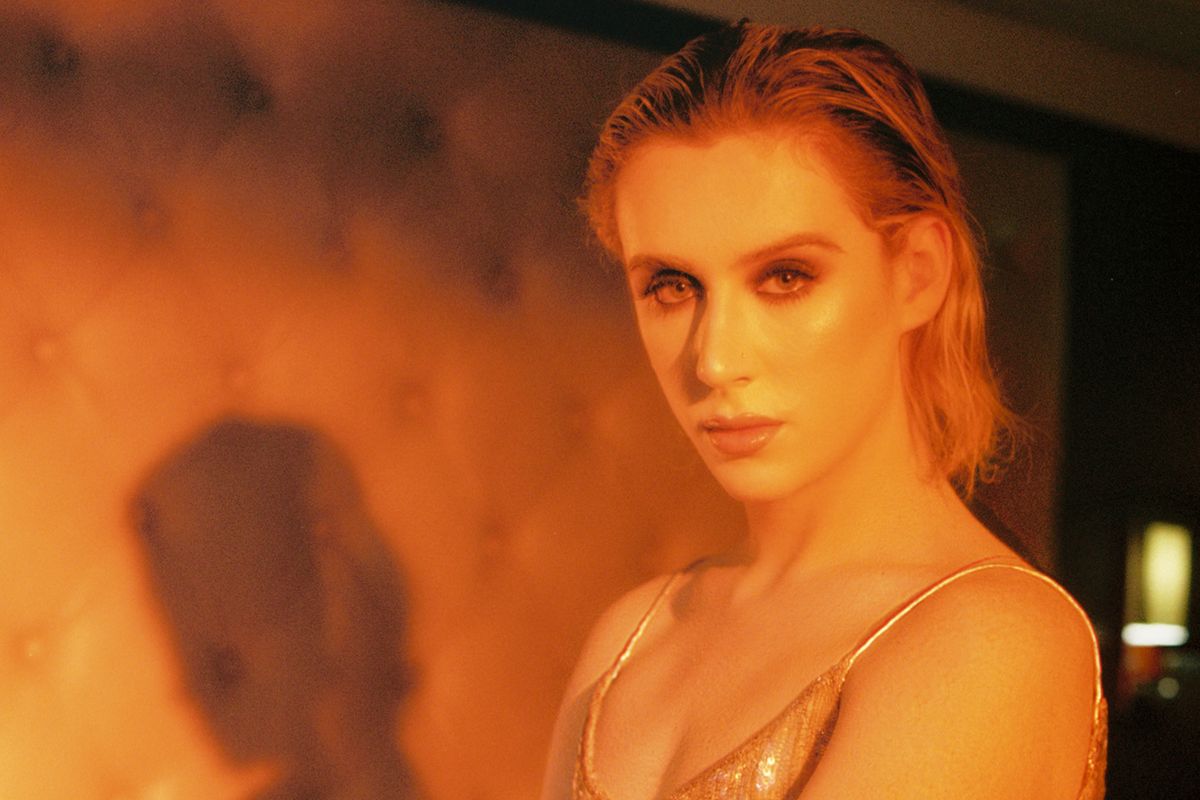 After 10 Years on YouTube, Trevor Moran Has No Regrets

What's it like to grow up on YouTube? Trevor Moran, now 19, knows; he's been a veritable celebrity on the platform since he was a preteen. (Technically, he says, he began at nine years old). His entertainment career has continued to flourish since — but the platform on which he got his start remains its nucleus.

Moran first went viral in 2011 for his "Apple store dance" videos, which were exactly that — a young Moran dancing in Apple stores in and around Temecula, California, where he grew up. Soon after, a two-episode stint on The X Factor (performing for judges Britney Spears, Demi Lovato, L.A. Reid, and Simon Cowell, no less) further elevated his fame. The following year, he landed a spot on Our2ndLife, a collaboration channel featuring four fellow famous YouTubers. Moran followed all this with two EPs of glossy, danceable pop — and kept vlogging, all the while extending his reach into the rest of the social media platforms, too.

His early vlogs were often lighthearted — viral challenges, contemplations about coloring his hair blue, taking Buzzfeed quizzes on camera, footage of a scream-filled catapult on a bungee slingshot ride. But as he got a bit older, Moran's vlogging got more personal. In a video posted two years ago, he came out as gay, and graciously answered questions from fans about his sexuality (even the invasive ones). His openness didn't stop there: Moran has since shared clips about his first crush, having sex with a girl, his gender, running in fear of a stranger who chased him on the street yelling transphobic slurs, and his mental health.

The shift in tone isn't a result of a calculated marketing ploy; Moran's approach to his public persona has always been more an authentic mirror than a scripted presentation. While he's still often silly and outlandishly funny, viewers are also watching his genuine coming-of-age in real time — it's something incredibly more honest, and increasingly more relevant to fans who are growing up right along with him.

"It's crazy that everyone's seen [me growing up], but it is so cool, at the same time, that it's all documented," Moran tells PAPER. "It's all online."

He's now prepping the release of a third EP (likely coming late summer, he says) that tackles more serious subject matter than his earlier works which, more often that not, were fluffier in theme — dancing, partying, having fun. "It didn't mean shit," Moran says. "It did not mean anything."

The collection is a mix of self-confident anthems (look out for "Bad Bitch" coming soon) and songs about heartbreak, he says. One of those is "Sinner," which debuted last December. Filmed in and around a Detroit church, the video for the track features Moran in femme looks, strutting between pews, entwined with the song's antagonist, and belting out religious allusions like "Father, please forgive me, 'cause I'm on the floor, praying on the floor."

Days before it dropped, he posted a video tearfully detailing his struggle with gender identity throughout the last year. Having been drawn to makeup and femme clothing since he was a kid, Moran began to wonder why he didn't feel personally fulfilled, and eventually "came to the conclusion" that he was transgender. Comments from fans — suggesting he transition, that he'd "kill it" if he were a woman, "as if it's a fucking game," he says in the video — muddied his questioning, and he eventually saw a gender-specializing psychologist. Moran says the doctor pushed him toward hormone therapy.

"I just thought that I was transgender because people would shove that down my throat just because of the way I dressed... when in reality, it was just me being me," he says. "I'm just Trevor that wants to wear clothes. It's not that fucking deep. There's so many amazing trans women out there that I respect so much, but it just wasn't my situation. And I'm happy I got to understand that about myself."

At that point, Moran finally realized how to love himself: "I didn't know what self-love was until the end of last year, the beginning of this year. To be able to look in the mirror and be proud of who I am today — that takes a lot," he says, adding that the EP also includes a song inspired by this revelation.

That journey led Moran to find power in talking not only about his gender identity, but also his sexual assault story. In his mid-teens, he was attacked by two twin brothers in their 20s, who later threatened to release photos and videos of the assault.

"I think it's good to get it off of my chest, because I don't ever talk about it," Moran says. "I just wanted to not hop on that bandwagon, but join that squad to spread awareness, and say that it's OK. Life's too short to let monsters walk on the street."

At the time, he hadn't yet come out, and was forced to tell his parents as a result of the situation. "It was a terrible way of coming out. Like, hey mom, hey dad, I'm gay, and I got fucking raped, basically," he says. Legal action is still pending, Moran adds: "I'm not done with the situation. I'm going to make sure that something's going to happen so that doesn't happen to anyone else."

Moran is grateful for the support of his parents throughout — after the attack, and in his coming out. Growing up in Temecula, which Moran calls a "cookie-cutter" town, they supported his dance and theater ambitions. They were terrified by the assault, but not shocked by his sexuality.

Not long after, though, Moran was uncharacteristically absent from the platform for four months. He returned in June, offering an intimate explanation for his hiatus: He's been living with depersonalization disorder, a mental illness characterized by feelings of detachment from one's own body, "like you're living in a dream." Diagnosed at 13 years old, Moran had been taking medication since. But last year, he felt that treatment wasn't working, and the doctor prescribed a new regimen — feeling better, the dosage was upped, but he later began to feel numb. In the video, he recalls being unable to cry or feel sadness when a family member died. Moran found himself going out and drinking more, and ultimately chose to stop taking the medication.

"It was my decision, and my psychiatrist wasn't so happy with me, but I did it," he says.

Stopping any kind of prescription treatment without doctor approval or supervision can be dangerous — Moran knows this, and makes a point both in the video and in conversation to remind others that he isn't recommending the move to anyone else.

The disorder comes in waves, he says, but he's learning to understand how best to mitigate those ups and downs. "Some days I'll wake up and want to conquer the world. The next day, I'll wake up, and I won't know who the fuck I am, so that's lovely," he says. "I channel [these feelings] into my music, and my videos. I think that's an important part. It sounds fucked up, but I probably wouldn't be the person I am today if I didn't have these issues that I have."

"I probably wouldn't be the person I am today if I didn't have these issues that I have."

He also has the help of his family, as well as friends (a new roommate included).

All he's ever wanted, he stressed, was to "turn his pain into art," and to make his fans happy. But it's a mutually beneficial relationship: Moran finds catharsis in sharing, and his fans see a vulnerability that could inspire their own self-love and strength.

That story is long from complete, but even as it stands now, it offers a strong case for the benefits in embracing a lifelong journey to truly find yourself. To borrow a line from Moran himself: "Experiment, find out what you like, and run with it."