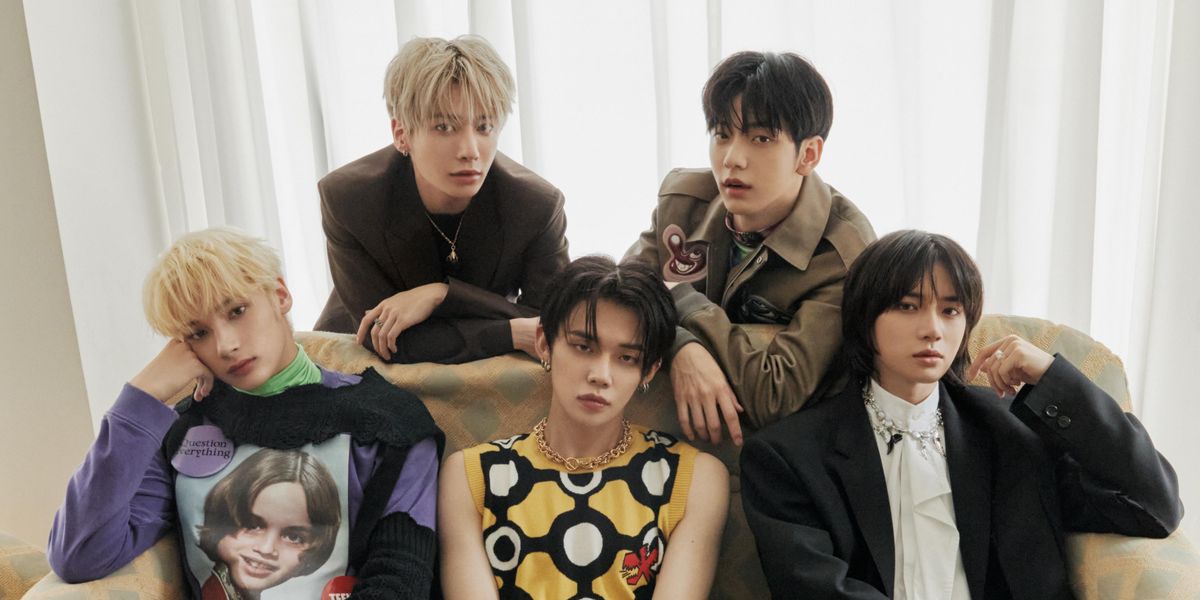 Tomorrow X Together Speaks to Everyone

PAPER is spending this week inside the minds of Tomorrow X Together (known as TXT).

When you're a teenager, everything can feel like the end of the world. The reality is that the pursuit of adulthood is unending. You never stop searching for answers or dreaming about your future. Those nagging thoughts of self-doubt are still there, and so are the conflicting feelings of joy and anguish. It's what makes the music of Tomorrow X Together so potent.

The Korean pop quintet may be a voice for today's restless Gen Z, but their music speaks to everyone. "People's dreams, their plans for the future... These are concerns that people of all generations share," vocalist Taehyun tells PAPER.

It's early afternoon on a June day in Seoul, and the members of Tomorrow X Together, also known as TXT, are currently sitting in a cozy room inside their company building in the city's central Yongsan district. On a typical day, Soobin (20), Yeonjun (21), Beomgyu (20), Taehyun (19) and Hueningkai (19) would be their exuberant selves — talking over one another and joking around — but today is busy.

The group is in the middle of their promotional cycle for The Chaos Chapter: Freeze, and they have another schedule planned right after this. Time is so precious that our interviews are being timed down to the second. Though slightly subdued, the group is in good spirits: Their album just debuted at No. 5 on the Billboard 200. They take a quick moment to celebrate the accomplishment, bursting into a round of applause.

"It's an honor," leader Soobin says with a dimpled smile. He's being characteristically modest; the feat makes TXT only the third K-pop group to chart multiple albums on the Billboard 200 in the same year, following their labelmates BTS and the nation's girl group TWICE.

"We are really happy and thankful that we are able to receive these accolades and these titles," oldest member Yeonjun says. "It drives us and gives us that motivation to keep trying harder so that we can maintain this momentum."

It starts, of course, with the music. It's easy to empathize with the anthemic angst of songs like "0X1=LOVESONG'' and "LO$ER=LO♡ER," or relate to the mellow misanthropy of TikTok sleeper hit "Anti-Romantic." The bubbly, buoyant "No Rules'' laments lost time and wasted youth (who can't relate?), while hyperpop track "Frost'' erupts into hook-heavy, overly emotive chaos — a "Black Parade'' for a new gen.

"We're telling our stories," methodical Taehyun says. "We're taking part in creating this music, making our authentic voices and our sincerity heard. That's what resonates with people. That's what people can relate to."

They've been telling their coming-of-age stories since 2019. Their energetic debut single "Crown" reflects emotional growing pains; the edgier "9 and Three Quarters (Run Away)" celebrates the life-saving magic of friendship; and the broody "Can't You See Me?" unpacks the brewing resentment among friends. Last fall's "We Lost The Summer" was written for the generation of young people struggling to find connection amid the global COVID-19 pandemic that put our lives on pause. Through their music, TXT are weathering the storm of adolescence.

"The issues that are on the minds of young people are probably similar around the world," Taehyun reasons. "There are a lot of limitations that we're being placed under because of the pandemic. That's why we have songs like 'We Lost the Summer' and 'No Rules.'"

"What I would like people to feel is a sense of joy and a sense of healing and consolation," youngest member Hueningkai says of their music's positive energy. "I want people to be moved and to also feel like this is something new, like these are new emotions that I'm feeling. I hope they're inspired by that."

They are. Fans of TXT, known as MOA (short for "Moments of Alwaysness") take to social media platforms like Twitter, TikTok and fandom community app Weverse to tell the members how much their songs comfort them amid difficult times. (They also exchange memes.) These online messages from MOA mean a lot to TXT. For the past 18 months, it's been their sole connection to their fans. "Our fans always tell us that our songs really resonate with them and that they can relate to them," Soobin says. "They say our lyrics have really helped them through tough times, they console them."

In exchange, TXT also open up to their fans through regular diary entries and replies posted to Weverse. "It's really fun being able to write these posts and to see notifications in real time," Soobin says. "I think it's the same for MOA." It's also a safe space for the artists and fans to be vulnerable. "I get a lot of strength from the things MOA write," Hueningkai says. As for Beomgyu, the introspective performer calls MOA his best friends, and he treats them as such — whether he's clowning them or talking to them about life. He once consoled a fan struggling with depression and he's reassured them of their self-worth.

But Beomgyu says the reassurance goes both ways because he talks about his hopes and concerns, too. "I'm the kind of person who likes to tell my friends what I'm thinking, the things that are bothering or that I'm worrying about," he says. "I like to open myself up. I talk a lot with MOA. We're able to console each other. They listen to my stories and console me. And at the same time, MOA tell me their stories and I listen to them. "Opening myself up [to MOA] has allowed me to receive that help and to receive that consolation myself."

From the opposite side of the room, Taehyun adds, "It brings us a lot closer [to MOA]."

And it brings them closer as a group. So much of TXT's ethos as a group is rooted in the complexities of friendships. Their music and visuals often tell the story of a lonely boy who finds hope in companionship, while also exploring the messiness of their relationships. Your friends can save you, but your friends can also hurt you. You love your friends; you resent your friends. TXT exposes these feelings in all of their big and beautiful, ugly realness.

When it comes to friendships, the members of TXT are navigating these issues alongside their fictional selves in the whimsical +U universe. "What's important is the sincerity of your communication," Taehyun says. He's had experience having difficult conversations with his members, but these conversations have only made their working and personal relationships stronger. "Rather than the amount of communicating that you do, it's about the sincerity that you're sharing with each other. This is a quality that makes us [members] such good friends and be able to relate to each other."

"I'm the kind of person that instead of having a really huge group of friends, I like having a small group of close friends," he adds. "My friendships are deep... Being able to trust each other and being able to tell them what you're really feeling in your heart is really important."

This level of trust makes TXT so close. They've spent the past five years together, first as trainees at Big Hit Music, where they developed their technical skills as singers, dancers and now as idols. They live together. They work together. They do most things together. It's a perfect symbiosis of mismatched personalities and temperaments. Watching them now, they fit together in unexpected ways. Youngest members Taehyun and Hueningkai are the most talkative, eager to talk about their growth as artists and the meaningfulness of their music. Yeonjun tackles the more open-ended questions about their success so far and their ambitions for the future, while Beomgyu likes to talk about MOA and songwriting. Soobin, the gentle leader of the team, is mostly happy to sit and watch, adding his sentiments when needed.

"We do feel more mature and that we've grown," Hueningkai says. "Participating in the production process and the making of our music has allowed us to understand ourselves more deeply." Next to him, Taehyun adds, "It's our love for music that makes it all possible."

They want to continue to challenge themselves musically. "We've done a lot of different genres and we'll continue to experiment with a lot of different kinds of music in the future," Taehyun says. "I don't think I'm able to say right now that 'this is the Tomorrow X Together sound' or 'this is the TXT genre,' but eventually we'll be able to recognize that sound through all of the challenges and say, 'This is the Tomorrow X Together genre.'"

Fans would argue that TXT have already found their sound. It's bold and emotive, expressing the full magnitude of their tumultuous emotions. They encourage us to feel everything, no matter how lost or complete, and to brace for impact. The world may be ending, but at least we're together.