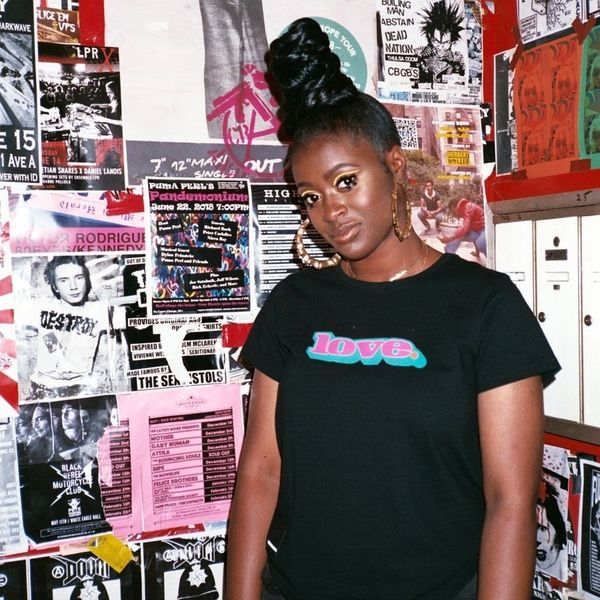 Tierra Whack is who we've been waiting for. The Philadelphia-bred artist is only 22 and already on the radars of Meek Mill and A$AP Rocky and she only just released her first visual album, Whack World, in May. The album is made up of 15 songs, each a minute long and all leaving you wanting more. Tracks cover everything from Chinese food orders to her dog's death to her deadbeat dad. Like her, Whack World is fast-paced, quick-witted, colorful and the best kind of weird. After listening through once, you get why Tierra Whack is the future of rap.

It feels so empty, weightless to call someone unique. We live in an world where we've exhausted the word and have bred an occasionally homogenous culture where we all look and act so different that it tends to be the same. But that's not the case with Whack. She is something special. Vibrant, with her yellow eyeliner painted high across her lid and the rhythmic and confident cadence in her tone of voice. She is silly and sharp and occasionally off-topic. With so many unfinished thoughts, digressions, rambling sentences it's a practice and a pleasure to watch her mind jump around.

I remember the way I felt when I was first introduced to artists like Andre 3000, Lauryn Hill, and Missy Elliott. I feel that with Whack — something really big. She's the manifestation of what happens when we make the space for women of color to be vibrant, complex and versatile, all on their own accord.

Her and I meet in midtown and grab ice cream from a man who doesn't seem to have the energy to banter with her jokes. Eventually we head south toward a vintage store on St. Marks. She reads signs in a sing-song voice and Zach, her DJ and equally freaky and fun friend chimes in with what can only be described as an alien-like voice and it just all makes sense.

Between the ice cream, thrifting (she scored a very necessary "I <3 dick" shirt) and discussing the intricacies of what snail slug sex looks like, we dive into her writing process, her introverted nature and owning the label, "weird," as a black girl.

So I have to ask, why choose to keep each song to one minute?

I have so many styles I just wanted to showcase my versatility without it being too much. Technically this is my first project but I have so much to give and how do I not overwhelm people, you know?

Ease them into who you are.

What did the writing process of Whack World look like?

I went back to writing, like physically writing on a notepad. Every song was handwritten and I did that because I like to give myself a challenge. I don't like to stick to one thing. The only reason I started using my phone was because when I was younger and would go to studio sessions I'd be like friends or cousins and we'd just go and I'd leave my rap book at home so it was more convenient to write your raps in your phone. It was really hard at first but I eventually got back in the rhythm of it. It feels more organic. Writing is very therapeutic for me and I wanted to get back into that feeling I first had. It's good.

How long did you work on it for?

I don't even know. We go in the studio and we never look at a clock.

Blackout, wake up and I guess it's done!

One take! Each song! Done. Laughs.

Even visually with each song you get a taste of a different Tierra. Between even more nuanced intricacies like your hair.

Yeah I had 13 different hairstyles.

"People see me do weird shit and assume I only do weird shit. No, it varies. I have many different styles and sounds."

I read that you wrote poetry before which obviously lends itself to both writing and rapping but have you always had interests in visuals as well?

Even when I'm creating a song and I'm recording I have to see like I can't physically finish a song. Growing up watching MTV jams. That was the only channel I viewed, watching Busta Rhymes, Eminem, Ludacris, Kelis, Pharrell. It was just something about color and craziness that always captured my attention.

I love what you created. It's all so fucking weird. It's interesting because I feel like when we talk about being weird we equate it to whiteness. And as a woman of color, it's refreshing to see you be just that! Weird!

Yeah I got that a lot when I was younger, that I "act white." It's just me. It's natural. When I was younger coming up it was hard because I was around a bunch of different kids that made fun of that or asked me why I was doing something. But I always did what I wanted. Of course I would second guess myself growing up because everyone was looking at me crazy but it's just me. People see me do weird shit and assume I only do weird shit. No, it varies. I have many different styles and sounds.

Do you think it's hard as someone who self-describes as an introvert to be in a very public field, especially on such a fast trajectory?

Yeah, but I guess that's what I chose.

Has it made you more of an extrovert?

I just turn it on and off. We're humans so like one minute you're in the mood and then the next you're not.

As your growth continues, what does "making it" look like for you?

I don't know, just being happy. Being successful for me is being able to like give back to my mom. She took care of me. I want to take care of her now. I feel like I owe her so I just want to be able to pay her back. That's success.

Is it just you and your mom?

Me, my mom, my brother and my little sister. And they're living with her. They're included! Growing up and seeing my mom struggle and being at a point where I can start to help her and she doesn't have to call or reach out to other friends or family. She'll have me.

What would you ideally want people to take away from the music that you make.

I just want people to talk. Good or bad. There are people talking shit about my project but that's ok because they are still saying my name and they know people. I just want people to talk. I want to create dialogue. I've been in so many studio sessions where people become friends by debating about music. I like debates. I can't tell people how to accept or feel or interpret. That's why I made my project the way I did. I have so much to give.

What do you hate and love about music right now?

I've had so many people tell me that you should get high or pop this pill to get in the groove and they're basically telling me I'm not that good and would be better if I got high or did some type of drug. I just don't think that's necessary. People think in order to be cool you gotta have a cup of lean and I'm not knocking anyone that does do it but there are kids that are doing shit because they see someone else doing it and they don't have the strength to say I'm not going to do that or it's not smart. It's only when people die are we like "wait slow down, don't do that!"

Shouldn't get to the point of death where we finally check-in.

Exactly. I just don't like seeing people killing themselves. Just doing things that they know can kill them but still doing it. Everyone makes their own decisions but it just makes me sad. I grew up with my grandmother and she's an alcoholic and that really sensitive so yeah. I remember when she was normal and watched her go downhill and it was really depressing. So maybe it's just me feeling a way.

And what do you love about music right now?

I'm just happy that I'm getting in. A few years ago I felt like I didn't fit. Technically, I still don't fit but that's okay. I'm saying now that that's okay. I'm going to do my own thing and somebody in this world will listen. I love that I can just be me. Growing up in Philly that's all you know and your surroundings is all you think you have and then you go somewhere else and it's like oh wait there's more out there. That's when it opens up you're mind. I'm cool. Fuck that! That's why travel is one of my favorite things to do. I'm like sponge. I absorb every little thing.

Everything is an influence.

Everything. I like crayons. I like really spicy shit. I love wings I like my pogo stick. And just art in general. Pictures. I have random art books and I don't even read them I just look at the pictures. I'm a very visual person. I like sneakers and I have like 200 pairs of sneakers but I'm not a sneakerhead.

If you're in NYC this weekend you can catch Whack performing at MoMA Ps1's Warm up event. Buy tickets here.