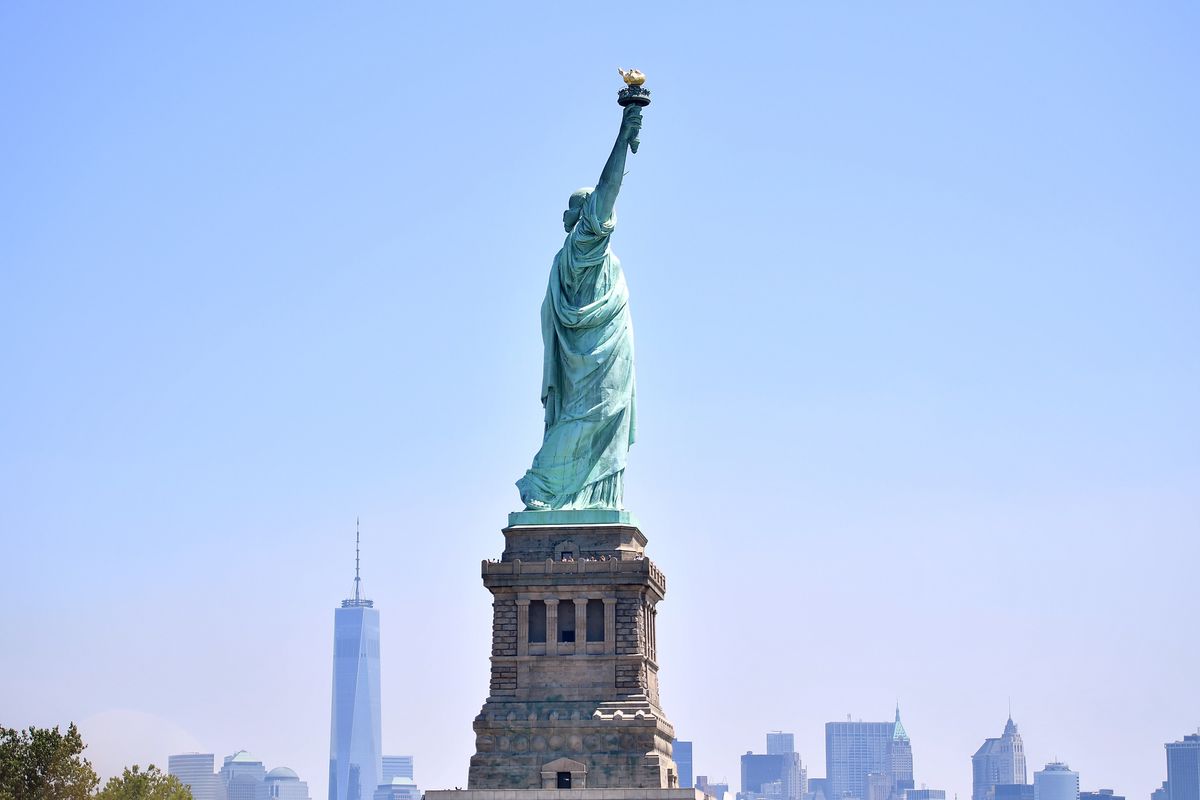 This 4th of July at around 3 pm, Therese Patricia Okoumou climbed the Statue of Liberty to protest the U.S. government's inhumane treatment of migrants, specifically the separation of children from their parents, at the U.S.-Mexico border. She stayed at the base of the statue for hours, saying she wouldn't come down until "all the children are released." Around 4,5000 visitors were evacuated from Liberty Island, where the statue is located, and by 6:15 pm, two officers climbed the statue using ropes and had her come down via a ladder.

Okoumou is a 44-year-old immigrant from the Democratic Republic of the Congo. Her protest has gone viral and has garnered widespread support on social media. Many people, including Bernice King, Martin Luther King Jr.'s daughter, feel that protests like Okoumou's, which publicly and unapologetically call for justice, are what makes America great. The protest is especially impactful because it was conducted on a July 4th, a holiday which is meant to encourage a sense of undisputed patriotism. Her brave protest has made national headlines, bringing the plight of migrant families much-needed attention.

Okoumou is affiliated with the organization Rise and Resist, which carried a banner and wore t-shirts saying "Abolish ICE" near the Statue of Liberty yesterday as well. They say they were not involved with or aware of her decision to climb the statue, though she did wave a shirt that said "Rise and Resist" on it at the statue.

Okoumou was arrested and is due to go to court on Thursday. She could potentially be charged with violating national park regulations, trespassing, and disorderly conduct. Rise and Resist has said that they will support her, writing, "Rise and Resist will be doing jail support for Patricia, and is arranging great legal representation for her. We will let everyone know how they can further support her as soon as we find out more info."

Protesting at the Statue of Liberty demanding an end to state violence & the inhumane detention of children seems a… https://t.co/0PfgJRkdXC
— Bree Newsome Bass (@Bree Newsome Bass)1530760137.0

My girl is perched on the STATUE. OF. LIBERTY. Pink sneakers, legs crossed giving the side eye, protesting this cou… https://t.co/qHIGASQbOW
— Erica Jordan (@Erica Jordan)1530746317.0

NBC just said the protester who climbed the Statue of Liberty says "she will not come down willingly until 'All the… https://t.co/WEtVyWdEQU
— Ayesha A. Siddiqi (@Ayesha A. Siddiqi)1530754350.0