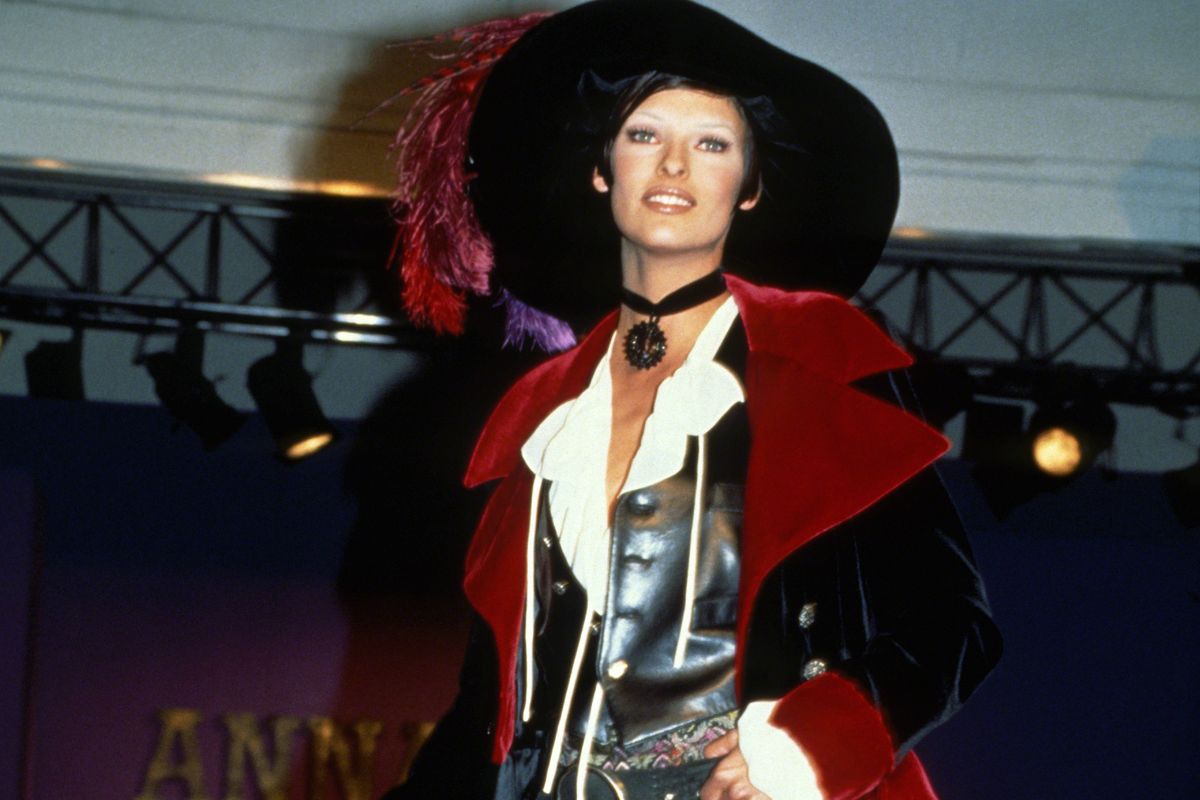 The conversation during the end of New York Fashion Week is always abuzz with this season's triumphs and tribulations, but it's also one of the best time to remember some of the most iconic fashion shows from NYFW's deep past. We asked Ilius Ahmed, who runs the Instagram account Unforgettable Runways, to Peruse through ten of the most fabulous and defining fashion shows of the past two decades, featuring the supermodels that defined today's generation of budding Internet-famous models and the now-vintage clothes that we still aspire to acquire all these years later.

Stephen's iconic '84 Graffiti collection is as modern and contemporary today as it was back in the 80s. Inspiring designers of today, this collection signifies what the early 80s underground East Village scene represented — self-expressionism with graphic punk undertones, and bold prints fused with sequin couture. Models walked to the music of Siouxsie and the Banshees, drawing in the audience in what one could call the most unforgettable collections of its time. Many years after, this collection inspired Marc Jacobs at Louis Vuitton and still remains one that many fashion designers and editorials turn back to for inspiration.

Power dressing at its best, Donna focused on the New York business woman of the early 90s, jersey bodysuits teamed with the classic 'white shirt' worn with tailored Wall Street-inspired suits. This collection dominated the editorials of the 90s with an advertising campaign entitled 'In Women We Trust' featuring Rosemary McGotha. Donna's '92 collection is a vote towards the woman who is strong, powerful and confident and knows what she wants.

Anna had sent me a video tape of the show back in 1992; unfortunately I could never view it as it was the wrong format for the U.K. I would love to see this show as it evokes memories from my fashion student days and the music scene of the time. Naomi and Linda walked down the runway to Nirvana and Blur in tweed 60s suits and leather suede-fringed dresses that made this show one to remember. The 60s and 70s rock star-meets-cowgirl style, inspired also by vintage flea markets, paired with downtown hippy looks marked the beginning of the 'grunge' era as seen in the following season of '93.

This collection was the antithesis to the glamourous power dressing that had been seen during the previous years, and marked a significant change in fashion trends and styles to come. Grunge embraced the new up and coming generation of cool kids as well as the music scene dominated by Kurt Cobain in the 90s and Marc Jacobs didn't shy away, presenting a collection of floral silk granny dresses, teamed with knitted skull caps and Doc Martens. Fresh faced, eyebrow-shaved supermodels dropped their signature power walks and casually walked the runway in a collection that will certainly be remembered as a major turning point in fashion history.

Todd's collection of '93, inspired by the dizziness of fairground rides and vibrant paintings of the carousel, was a kaleidoscope of multi-colour, print and kitsch campness. Supermodels of the moment, styled with an overdose of big hair and make-up, competed with New York drag queens, such as Billy Beyond, to the tune of RuPaul's "Supermodel (You Better Work)" as the audience cheered and applauded. This was undoubtedly a show that embodied the fun and freedom of sexual orientation. The show certainly was a contrast to the grunge movement of the time and one of my all-time favourite Oldham shows.

Baby doll princess dresses, unisex looks, vintage sportswear and glamour kitsch punk formed the essence of the '94 collection from Sui which was highly influential in trends that filtered through the music and nightclubs scenes of the 90s – everyone was wearing a version of this look. The most memorable part of the show is the trinity of Supermodels Naomi, Christy and Linda dressed as fairy princesses in feather boas and feather headdresses.

Isaac is one of the first designers to combine fashion with film, the collection of '94 alongside the film 'Unzipped' had given us an in-depth insight behind the scenes of the creation of a fashion collection as well as the personalities of supermodels and fashion insiders of the time. Isaac presented a mix of casual and formal wear pieces sending supermodels Shalom, Linda and Yasmeen down the runway in Eskimo inspired coats teamed with ball gown skirts, t-shirts and mini sequin slips. A fresh modern collection that has certainly gained its place in the fashion archives as one of the most memorable shows and fashion films of the 90s.

It's all about the suit and dress, minimalistic and classic yet beautiful pieces, in this collection from Calvin Klein, who showed a look of understated luxury. A move away from the grunge movement of the previous year, '95 is all about simplicity and femininity, and Calvin offered lady-like pieces with a slight shift towards the chicness of the 60s which made this one of the shows top shows of the season.

Jeremy Scott's debut collection is certainly not one to forget. Futuristic space-age silhouettes reminiscent of 80s Claude Montana and Thierry Mugler mixed with traditional fabrics such as wool felt and leather in a palette of sugary pastels. The construction of the collection was astounding — graphic shapes and clean sharp lines. The models, styled like galactic stars of the future, posed and stormed down the runway.

Ford's debut collection is one of the most beautiful shows to this day; the presentation echoed that of the past salon couture style shows. 90s Supermodels, Hollywood and music stars all took turns to showcase in what can be described as a celebration of women's beauty of all ages. Lauren Hutton, Amber Valletta and Beyoncé walked the runway in a collection of pure indulgence married with high fashion luxurious looks. This collection certainly would not look out of place if shown during the Paris Couture shows. This is glamour at its best.