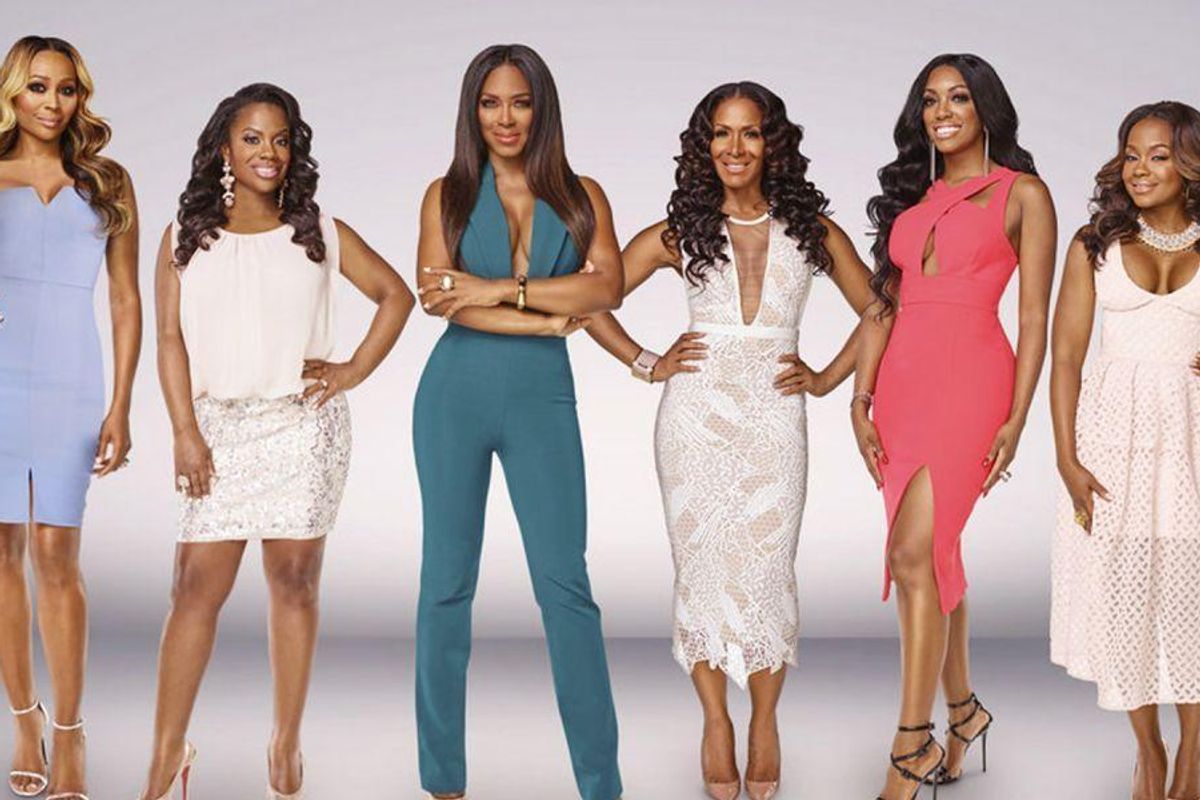 What constitutes good reality television? Is it an excellent cast? An exciting location? Or maybe it's the numerous scenarios that were so very clearly organized by the show's producers? Well, no, nope, and absolutely not. The barometer with which we should be measuring how good a reality television show is in what it gives viewers in terms of drama — because without drama, there's really no point.

Now that RuPaul's Drag Race has sacrificed the biting shade of past seasons in exchange for a number of touching displays of camaraderie in its ninth run (though Untucked is still just as good as ever, if not better), it's reassuring to know that, when it comes to drama, we can always count on the Real Housewives of Atlanta to deliver. (Duh. There's a reason Solange once tweeted that, if she could have things her way, the show would air every other day.) If you don't believe me, look no further than last night's epic conclusion of the series' ninth season four-part reunion special.

The ninth season of RHOA has easily been one of the show's best. With the return of "bone-keeper" Sheree Whitfield, two housewives in the midst of divorces from their husbands, a petty feud over whose custom-built house was better, and incendiary cameos from fan favorites like Marlo Hampton and Kim Zolciak, this season has been far from short on storylines that tread the line between being either hilarious or heartbreaking. But while these narratives are par for the Real Housewives course, this season gave us some drama that was a little...different. As a matter of fact, it's hard to even call this "drama." This is what I commonly refer to as a straight-up scandal.

About midway through the season, a rumor claiming that housewife Kandi Burrus was a closeted lesbian started to circulate amongst the other housewives. When Kandi met with Porsha Williams to address said rumors, the two got into a heated argument. Eventually, Porsha let loose that she had been told that Kandi once tried to drug her and then take her home to her in-house sex dungeon. At the time, Porsha appeared to be speaking from the side of her neck — just making things up on-the-go for the sake of having a good clapback for Kandi's accusations against her. But with each new episode, it was clear that Porsha was serious and she had no plan to retract her statement.

As the season progressed, Porsha was painted more and more like a sociopathic liar. During a trip to Hawaii in episode 15, Kandi even brought printouts of a text conversation she had with Porsha immediately following the night in question to prove that, by nature of Porsha's cheerful demeanor over text, the odds that she had just gotten over fearing possible rape were slim. Still, without ever clarifying the minute details of her wild accusation, Porsha stood by her story. Something about her claims didn't seem to add up, but that, of course, made the saga all the more interesting to watch.

Everything changed in last night's big showdown. For those familiar with how reality show reunions work (especially those of the Real Housewives franchise), it was obvious that this ongoing scandal would be addressed. But as for how it actually played out, no one could have expected. When host Andy Cohen asked Porsha to talk a little more about the incident, she informed everyone that she was unable to talk about it due to a cease and desist letter that had been served to her by Kandi's team. Instead, Porsha announced that all questions about the accusation should be redirected to Miss Phaedra Parks — but not because the attorney (and Porsha's best friend) would be representing her in the case. No, Porsha wanted her questions redirected to Phaedra because...wait for it...it was Phaedra who told Porsha the rumor in the first place.

Soooo it's okay to repeat vile rumors bc someone told you? Jeez same person lies on everyone too #rhoa
— KENYA MOORE (@KenyaMoore) May 8, 2017

Watching the next scene was like watching a head-on car collision in slow motion. After initially refuting Porsha's claims, Phaedra was then forced to reveal that she was simply repeating something that she heard. "Something was brought to me, so I repeated it," she claimed. Porsha was clearly shocked by this and turned to her "best friend" ( the Frack to her Frick) with a look of complete and utter disbelief. Clearly unsettled, since, as she later revealed, Phaedra had been explicit about the fact that Kandi told her this little secret firsthand, Porsha raised her voice to say, "No, she told you that, Phaedra!"

Of course, the appreciation for this juicy drama was somewhat weighed down by the severity of the original accusation. Spreading rumors that someone tried to drug you and take you home with them is still, as Kandi so emotionally put it last night, indicative of "accusing me of being a fucking rapist," which is no laughing matter. (Admittedly, it was hard to watch while Kandi cried and revealed that, as the drama played out on television, she had been subjected to Instagram comments from strangers who referred to her as "#KandiAKABillCosby.") Luckily, today's announcement that Phaedra had been fired proves that these accusations were taken seriously by everyone involved. And with the vindication that Kandi received from having Phaedra's undercover machinations exposed, audience members could feel comfortable relishing in the overall absurdity of the situation. Had the Grammy-award winning housewife not been proven innocent in the end, feelings may be slightly different.

The remainder of the reunion was, just as Sheree had described in three words before it aired, "epic, emotional, and just bizarre." The story was so ridiculous, so over-the-top, so unbelievable, and so completely out-of-this-world that it just couldn't possibly be true. But it was, and what a treat for us. It was the kind of reveal that can really make someone's jaw drop, so of course the fallout would implore viewers to stay glued to their screens. In one swoop, this inescapable plot point was flipped onto its head. Looking around at the housewives' faces (even those who weren't necessarily involved), one could easily see that even they could have never seen this coming.


But what makes this drama so much better than the drama coming from literally any other reality show? Well, it's the outright absurdity of it. This drama, a classic game of he-said-she-said being taken to its most dangerous extreme, was unlike any other that I had seen except for in scripted movies and television shows. The way it played out — from Porsha's ill-timed initial accusation at lunch, to the Hawaii dinner where Phaedra sat idly as Kandi sincerely pointed to her in hopes that she would back her up in asserting that she's very anti-drugs, and all the way to two days before the reunion when, according to Porsha, she reached out to Phaedra another time just to verify that what her friend had passed on to her was correct — was straight out of a sitcom. The only difference? This was real life.

That means that Phaedra really accused someone of attempting to drug someone else. That she really had the nerve to say, "Well, I guess I'm the doggone villain now," after her nefarious plot was brought to the surface. It means that Porsha had really believed someone so wholeheartedly that she allowed herself to make a complete fool of herself on national television. As fans of the show, we all knew how close Phaedra and Porsha were, so watching the dissolution of "Frick and Frack" was like watching a puppet become conscious of their puppeteer. Would Porsha finally be ready to cut the strings? Now this is what we came here to see!

All in all, this epic conclusion has solidified that Real Housewives of Atlanta is not only the best of the Real Housewives franchise but, possibly, the best reality television show of all time. And that's precisely because Phaedra's ridiculously calculated scandal is something straight from a scripted television show (maybe even Scandal itself). Though it was disappointing to see that, ultimately, Phaedra would never, as Andy put it, "cop" to her "pretty megawatt lie" — let alone explain why she ever said it — there's no denying that watching as this story unfolded in real time was an experience that can never be duplicated. It's often easy to forget that reality television is still (at least quasi-)"real" and involves real people dealing with real things in their real lives. Finally, however, last night, Real Housewives of Atlanta showed us just how real these shows can get.