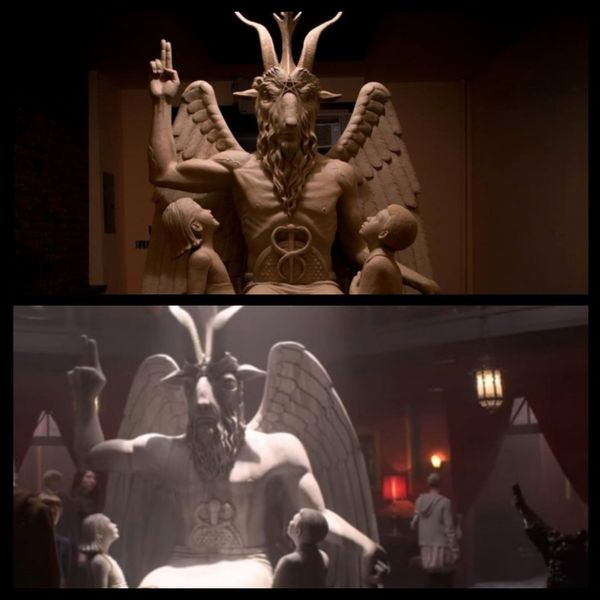 The set designers of Chilling Adventures of Sabrina, Netflix's darker reboot of Sabrina The Teenage Witch got way too real for the Satanic Temple. According to the New York Times, the Salem, MA-based temple, which has a long history of litigating on behalf of Satan, is suing the network for $50 million for copyright infringement and misrepresenting their ideology, after the show used a replica of the Temple's statue of Baphomet, a goat-man deity.

The Temple of Satan filed the official lawsuit against Netflix and Warner Bros. on Thursday, claiming that Netflix violated intellectual property laws. They don't claim ownership over the icon of Baphomet itself (an image that goes back to the Knights Templar in the 1300's), but their specific interpretation of it, which depicts the goat-god with a lean, gaunt body, instead of the more common voluptuously breasted rendition (gotta appeal to those family values Satan-worshippers) next to two children. According to Dazed, the Temple's version of Baphomet is copyrighted and protected by the Library of Congress.

"We are not laying claim to Baphomet itself, but rather our original interpretation of Baphomet that has become a central icon to our organization, much like a corporate logo," Greaves said in a blog post, via Dazed.

On top of copyright issues, the Temple feels that the show, in which Baphomet is a cannibalistic, blood-rite practicing Satan proxy whose statue is the mascot of a school of dark arts that many of the school's villains, gives the goat-god a bad rap. According to the lawsuit, Baphomet is a symbol of the Temple's mission to "to encourage benevolence and empathy among people rejecting tyrannical authority, advocating practical and common-sense justice, and undertaking noble pursuits guided by individual will." By their logic, the show's use of Baphomet doesn't only besmirch his good name, but also vilifies the entire Temple as an evil organization.

I'm amazed that anybody is confused as to why we would seek legal remedy over Sabrina using our monument. Would the… https://t.co/0jGzzQEgMw
— Lucien Greaves (@Lucien Greaves)1540840988.0

The lawsuit emerges as we approach critical mass of pop culture's interest in all things witchy — a trend which other Satan-worshippers seem more amused than furious about.

The Church of Satan (no affiliation with the Satanic Temple) recently spoke up about "the rise of satanic unease," addressing American Horror Story, Sabrina, Hereditary and The Witch, in a blog post: "Believers in and devotees of the adversary to Christianity's sky daddy are the boogey men and women that never seem to go completely out of fashion."

In all seriousness, the Sabrina-Temple of Satan lawsuit has raised questions about the double-standards about religious rights for Satanists — as well as plain old laziness on Netflix's part. Teams of producers and designers at your disposal and you rip of the Temple of Satan? Have some imagination.