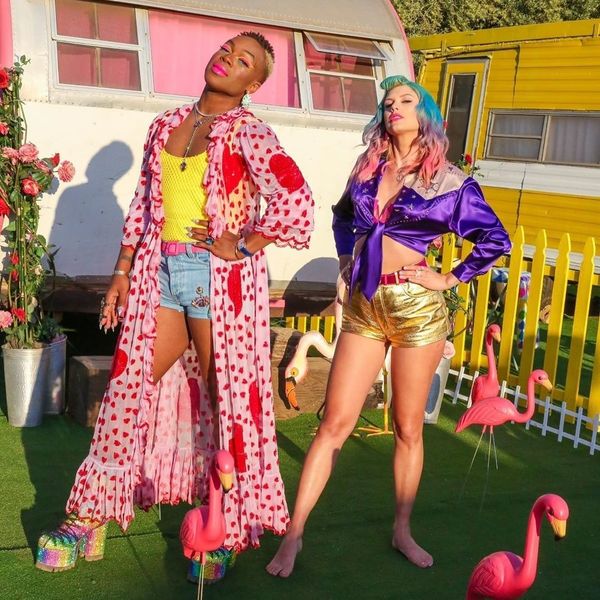 Taylor Swift has emerged as an unlikely ally to the LGBTQIA+ community as we inch closer to Pride day celebrations. The singer, who dropped her latest single, "You Need to Calm Down" last week, has been labeled both an icon for queer rights and a celebrity capitalizing on queer culture (depending on who you talk to).

Intensifying the debate, the pop star has now released her new music video for the song. With appearances from the likes of Hayley Kiyoko, Jesse Ferguson, Adam Lambert, Ciara, and even Ellen DeGeneres among others, Swift touches on literally everything Pride-related including the Stonewall Inn, rainbow flags, drag queens, unicorns, and Queer Eye.

At one point in the video, Ferguson is seen marrying his real-life husband, Justin Mikita, in a wedding ceremony officiated by Ciara.

The video ends with a message: "Let's show our pride by demanding that, on a national level, our laws truly treat all of our citizens equally. Please sign my petition for Senate support of the Equality Act on Change.org." The Equality Act is designed to prohibit discrimination on the basis of sexual orientation and gender identity in America.

But the central point of debate is not if the song is queer baiting, but if Swift's hair is bisexual. The singer, who sports a medley of pink purple, and blue (also colors of the bisexual flag) is being seen as a potential symbol of Swift's long speculated admission of her own bisexuality.

"Taylor really said bisexual rights !!" a Twitter user said. "I'm just gonna sit in the corner and point out that Taylor Swift's hair is the color of the bisexual pride flag," another added.

I’m just gonna sit in the corner and point out that Taylor Swift’s hair is the color of the bisexual pride flag 👀… https://t.co/bBtvlhEXoN
— Emma Pinkham (@Emma Pinkham)1560778415.0

Do you think Swift's hair is bisexual? Watch, below, and decide for yourself.