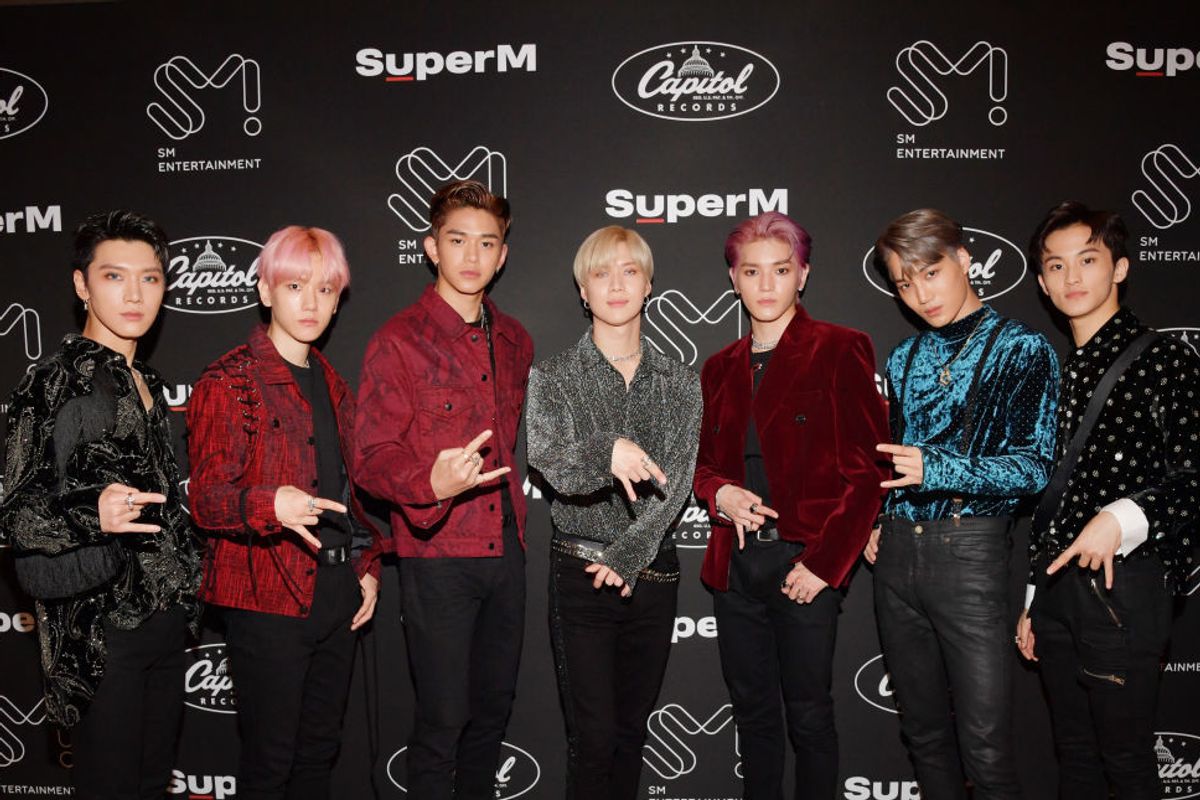 Will SuperM Be the Next K-Pop Group to Rule the World?

If you haven't heard of SuperM yet, you will soon be hearing their names everywhere.

The latest K-Pop group to launch from SM Entertainment, Korea's largest entertainment company, is already taking America by storm, and it's barely been a month. In the first week of releasing their debut EP The 1st Mini Album 'SuperM' (via Capitol Records/SM), SuperM reached No. 1 on the Billboard 200 albums chart with 168,000 copies sold, making history with largest debut sales by a K-Pop act.

SuperM is a seven-piece group assembled from some of the most popular K-Pop acts in the world: Taemin from SHINee, EXO's Baekhyun and Kai, NCT 127's Taeyong and Mark, and Ten and Lucas of Chinese band WayV. Their collective stardom certainly has helped influence their popularity, as the group's high-energy debut single and video to "Jopping," which came out October 4, has already amassed more than 28 million views and counting.

SuperM's fandemonium was in full swing at an event the next day hosted by Capitol in Hollywood, as thousands of fans swarmed Vine Street to see the group's first-ever live performance. SuperM also performed their new hit on Ellen DeGeneres' daytime talk show, which is basically America's living room.

There was even a cute segment after where the group taught Ellen about "jopping." What is that? Urban Dictionary describes jopping in multiple ways: a dance combination of jumping and popping with a disclaimer, "I promise it has nothing to do with ejaculating into someones ear," or a mix of jiving and bopping.

Stans are fighting over which breakout K-Pop act is better: BTS, who has also broken streaming and sales records, or Super M?

@chartdata @superm @BTS_twt dont compare them to BTS when BTS did this organically without cheating or using unethical methods.
— Ahlem⁷✨ᵇˡᵐ (@Ahlem⁷✨ᵇˡᵐ)1571014131.0

BTS, also a seven-member supergroup, first set the record for topping the Billboard 200 with last year's Love Yourself: Tear album, selling 135,000 units. It was also BTS' highest-charting album in a Western market and the first Korean album to top the U.S. albums chart. Naturally, Super M's higher first-week sales have BTS' Army stans battling it out with SuperM fans, but can everyone relax? These may be my famous last words, but there's room for everybody to succeed.