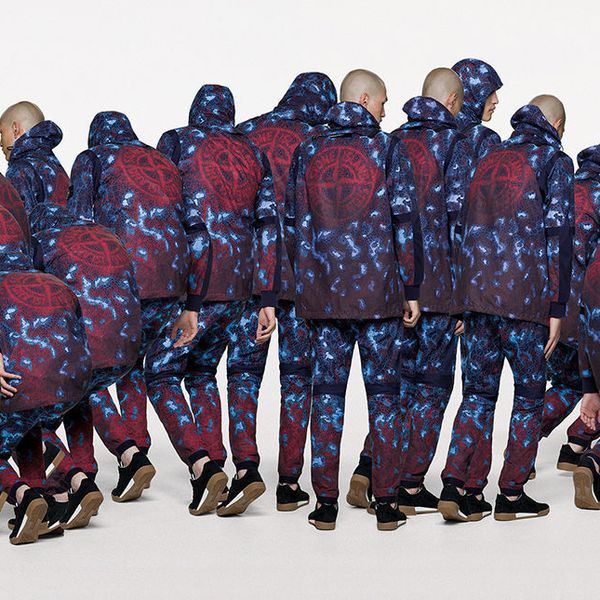 Stone Island Gives Us the Future of Camo

From military fatigues to duck-hunting hats, camouflage has come in all sorts of shapes, colors, and sizes. Everyone from Andy Warhol to Miu Miu has at least at some point offered their own take on the iconic pattern, putting it up there among florals, plaids, and even leopard print as a designer's essentials. Since first being introduced in 1981, the camo we have come to know and love (or hate) hasn't changed a lot but Italian menswear brand, Stone Island, is hoping to change that in the most radical way possible.

Having already showcased their spring 2019 collection, Stone Island unveiled their new take on camouflage in a brand new capsule that features thermosensitive sensitive material. Digitally designed to obscure the wearer in an optical illusion, the new line's heat sensitive fabric allows the pattern to shift shapes and change colors, from red to a muted blue, in a psychedelic chameleon-like fashion.

Related | Marine Serre Wants to Dress You for the Apocalypse

Stone Island's heat-sensitive camo feels like it was plucked straight out of the future, as if it was specially designed to thwart the aliens in the Predator franchise. Not only does it aesthetically drip with a certain aura of all-terrain cool, but its forward-thinking design feels like it was specifically meant to combat a world where battles aren't fought deep in the jungle but in the streets, avoiding the ever-present eye of the dystopian surveillance state.

Featuring a parka with a detachable hood, a two-in-one jacket/vest, and a pair of pants all cut in cotton ripstop, Stone Island's Printed Heat Reactive Fabric capsule is now available to shop online. Take a look at the video below to see the pieces in action:

A Year of Disruption: 20 Designers on How 2020 Changed Fashion Forever