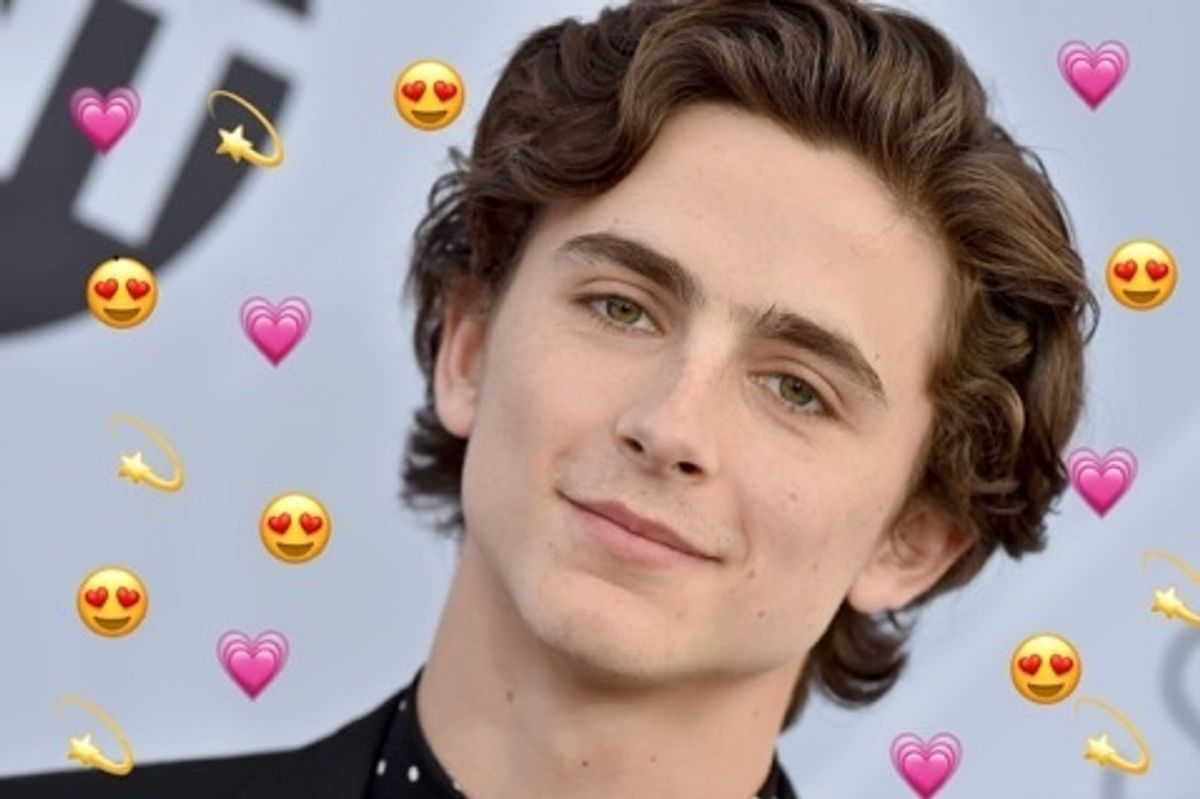 Derek (he's known by the mononym) is the quiet king of Timothée Chalamet Twitter. The 17-year-old has been following and tweeting at the French-American actor since early 2017, just before Call Me By Your Name broke, and wishes him a good morning and night most days. Chalamet occasionally replies, but Derek's tweets mostly go unanswered, except by his fellow dedicated fans. There's a certain beauty in it.

What makes Derek's love for Chalamet even more pure is that he's stuck with the actor even post-Call Me By Your Name hype. We were all fair weather Chalamet fans over that one hot Italian summer, citing his chiseled features and unruly brown curls and European demeanor as reasons to crush. But Derek is in this for the long haul. He's also a huge cinephile, and seems genuinely interested in Chalamet's acting abilities, alongside those classic good looks.

PAPER DM-d him to find out more about life as a Chalamet lover.

PAPER: Hi Derek. When did you first become interested in Timothée Chalamet?

I started becoming a fan of him in like mid 2017? Like at the end or middle of May 2017. And then I changed my username and layouts to him over that summer! But I had seen him in movies before, I just didn't know it was him!

What is it about him that compels you?

I think he's really talented! He's very dedicated with his work and very good at expressing emotions. And he's really lovely with his friends. He seems like a great person.

Is Call Me By Your Name your favorite thing he's done so far?

That, Lady Bird, and Miss Stevens!

It's basically about a teacher, played by Lily Rabe, and they go to a high school drama competition. And he's really really good in it! [Note: Turns out the 2016 movie also stars a pre-Riverdale Lili Reinhart!]

How much of your day do you spend thinking about Timothée Chalamet?

Like half! Just wondering what he's going to do next, and who it would be cool to see him work with...

Where do you get your Timothée info from? How are you tracking his career?

Mainly from like film news sites: Deadline, Variety, IndieWire. And interviews with people he's worked with.

Do you have a favorite Timothée scene?

I do. Probably the crying scene at the end of Call Me By Your Name.

Is there anyone else famous who you follow closely?

A couple of actors and actresses! But none as much as him. Rooney Mara, Margaret Qualley, Anya Taylor-Joy, Sasha Lane, Zoey Deutch, Riley Keough, Daniel Kaluuya.

Who should Timothée be working with? What should be his next career movies?

Both indie films and studio films! And working with actors like Margaret Qualley, Anya Taylor-Joy, Sasha Lane, and Daniel Kaluuya.

Take me back to the moment when Timothée first replied to you on Twitter. How did it feel?

It was really wild! I didn't expect it. I set my phone down to charge it, and I went to pick it up, and I had all these messages popping up saying "OH MY GOD DEREK!" And I went to check what happened and was like, oh my God.

Do you talk to friends IRL about Timothée?

None IRL! Mainly just online. I'll talk about actors/actresses/directors with IRL people, and be like, "Oh I like them!", but not go into detail.

So no one knows you run a Chalamet fan twitter with 12k followers?

jesus christ all timothée chalamet stans except for derek are annoying
— kellie (@kellie)1536021653.0

Timothée isn't very active on Twitter. Does that make things a bit annoying for you?

A lot of stans are lucky because their idols are super interactive with fans.

True! And he does when he's online, which is great.

If he stopped interacting with fans altogether, would you be cool with it?

Yeah! I'd understand if that ever happened.

He has liked some of your tweets and replied, but what would you say to him if you met in person?

I'd probably say "I love your work!", but I'd be super nervous.

He probably knows who you are by this stage.

Ok I won't be mad if Timothee Chalamet marries Derek cuz Derek represents all of us and the twitter love story woul… https://t.co/RvXBw3VI5q
— Owlette (@Owlette)1524755252.0

What do you think about his rumored relationship with Lily Rose Depp? Are you interested in his personal life?

Not really, to be honest, but she seems lovely. They seem really cute together.

Are you into finding rare photos and stuff? I really like that one of him and Saoirse Ronan at the restaurant.

Yes! As long as they're in a public space and the photos are like, for a magazine or website.

Tell me more about privacy concerns. Where do you draw the line as a fan?

I draw the line at friends like, not following them or anything unless they're like an actor or something. Or family re-posting, unless he himself shares it on social media.

What do you think is the craziest stan community on the internet?

I love Taylor Swift's music, and her stans are so cool in how they figure out little hints in her photos, videos, songs, etc.

What's your stanning history? Do you have any other stan accounts, or have you ever in the past?

I used to stan American Horror Story a couple of years ago, for a couple of years, when the show was at its peak popularity. But I kinda lost interest in it and started stanning Timothée and movies.

Do you think this could happen with Timothée? You move on and find the next person or franchise?

I don't think so, to be honest. I like him too much! And all of his work.